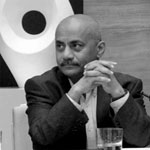 The world is small and huge at the same instance. In terms of distance, it is spread around the globe, but in the context of interconnection

The world is small and huge at the same instance. In terms of distance, it is spread around the globe, but in the context of interconnection, it is within the display space of a smart phone. You can access the entire globe by tapping, swiping, or scrolling the screen of your mobile set. Differences in locations and time zones diminish once that small device in our hand, pocket or handbag, is activated and operating. We take off to other continents, countries, communities through this slick gadget we possess.

International art events repeat the same experience. You walk into a triennial, biennale or an art fair, and soon forget the ground beneath your feet. You are transported to that ‘republic of art’, which is vernacular yet universal, situated in a region but transcends its geography, in order to converse and communicate across its physical, hence limited boundary.

Borders in general are understood a line that divides a nation from another nation, and are marks on a political map, but in reality, borders are erected everywhere, visible, invisible, emotional, cultural, religious etc. Lahore Biennale 02, it appeared sought to move beyond demarcations: of languages, ethnicities, and aesthetics. It shared with the audience that artists from the Middle East, North America, Europe, South Asia, and North Africa are speaking same language but in varying accents. Those who were invited to participate in the Lahore Biennale 02 dealt with issues such as gender, post colonialism, race, politics, all which concern societies across regions, but each artist have understood and appropriated these according to his/her particular situation/condition.

In its present issue, Art Now Pakistan addresses this divide or distance between local and universal. National and global. Between here and everywhere else, or what is coined by the curator of Lahore Biennale 02, “between the sun and the moon”. Interviews and profiles of artists who are residing in more than one locations, physically or psychologically; essays on the issue of international in art from different points of views, and the book review of Iqbal Geffrey’s monograph, which demolishes the adherence to any regional, national, religious identity (mainly due to the split of the artist’s name. Partly Pakistani, partially English). The current edition of the magazine is an attempt to take our reader from the confines of a ground, to the world of international, where local identities are merely tags of a conference, which can be put aside, if one is in a relaxing mode/mood.

Or to the virtual world, where local address is not relevant, necessary or desirable, because by surfing an Internet site you are accompanying your fellow traveller of electro-magnetic fields, no matter if you are in Chile and she is in China. The international is transnational now!