Between the Art & the City LB02: a creative relationship

Ghulam Abbas’s acclaimed short story Over Coat is a character sketch of an anonymous protagonist who goes for a walk on the Mall Road. But it is also a sketch of the city of Lahore. For the purpose of this essay I choose not to read heavily into the story’s postcolonial critique. Despite the postcolonial angle, the story does celebrate the city of Lahore. Using Mall Road as a setting, the story is perhaps a synecdoche of the entire city itself. The Lahore Biennial does something very similar. Lahore hosted its second biennial this year from the 26th of Jan – 29th of February 2020.

an event celebrated or taking place every two years.

The word biennial is also used for plants that take two years to grow from seed to fruition. That is a beautiful meaning that the word shares with its Art event version. An art event that takes two years to be conceived and reoccur; all refreshed and presented anew. Its relationship to a city is very close and unique. One cannot go without the other.

The Lahore Biennial 02 weaves itself through the city in a manner of an embroidered tapestry that overlays a pattern under it. The embroidery recognizes the pattern and follows its cues yet brings a fresh form to the tapestry. The city of Lahore has a rich cultural history that presents itself in its architecture, sights and smells, food, art and people. The Lahore Biennial 02 is a fine specimen of its curatorial genius where it recognizes the varied aspects of Lahore as a city and choses to celebrate each of them. It pays keen attention to the history of this region and the potential its future holds.

Hoor Al Qasimi is the curator of the LB02. Her curatorial vision needs little introduction with her being the President and Founding Director of Sharjah Art Foundation since 2002. Al Qasimi has her schooling in practicing art and curation from Slade School of Fine Arts and the Royal College of Art in London. She also has an extensive portfolio to support her vision for the Arts in the UAE and internationally. She has brought all that flavor to Lahore with her as has she brought a wide list of internationally acclaimed artists to Pakistan. Her connection with the artists in the West and even more so, the artists from the other and alternate representations of the world like Iraq, Iran, India, the Middle East speaks tons about the rich connections and conversations that have taken place during the Biennial.

Across the street, the1 vendors compose poetry spontaneously while selling their wares2. She says she feels shy sitting among all those strangers3, surrounded by a brick wall about fifteen feet in height, pierced with thirteen gateways4. “ I understand the sensation”, I smiled in reply5 or I exclaimed with indignation6. 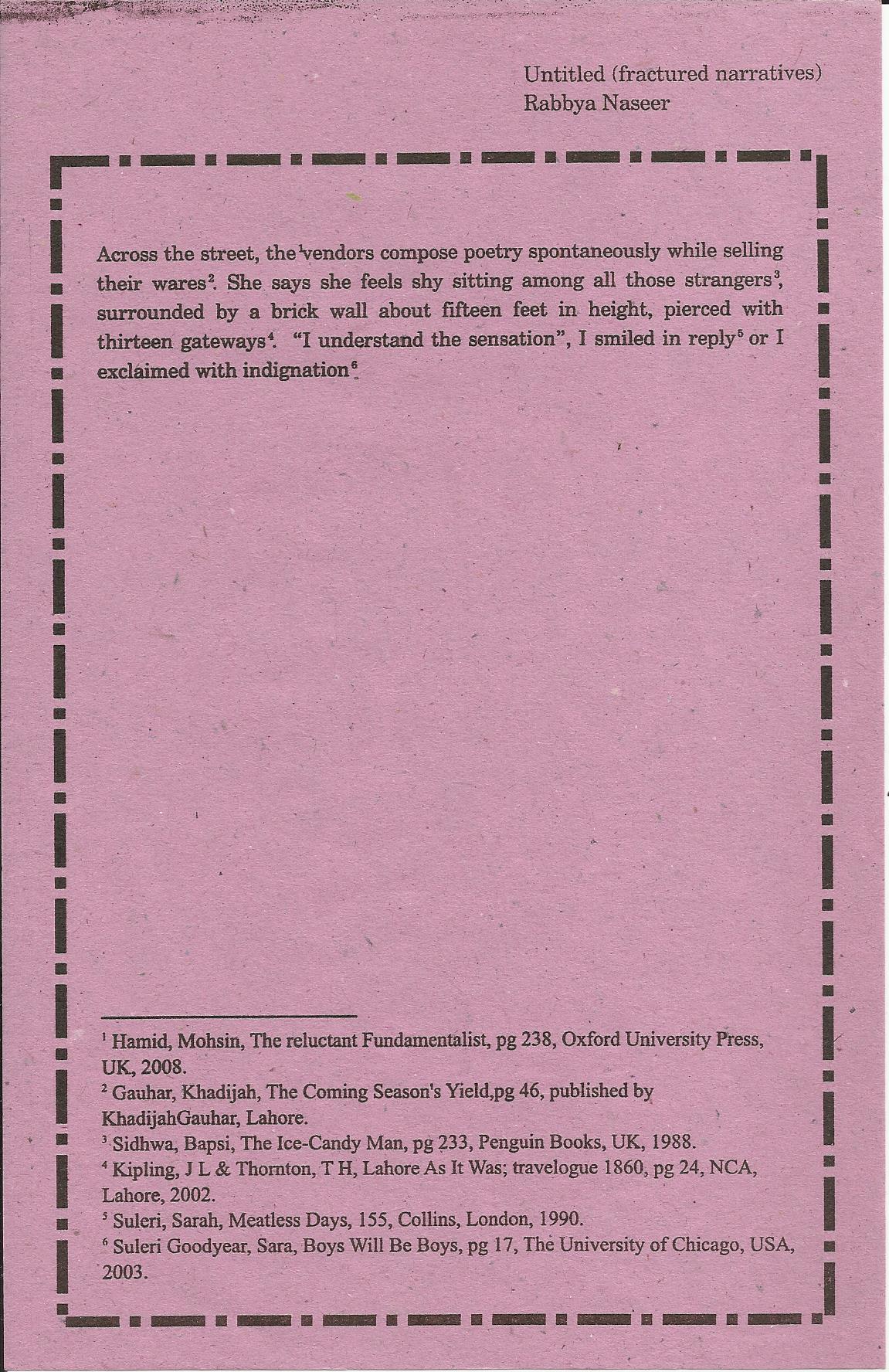 During the Mughal times, Lahore rose as the kingdom capital and hence the Lahore Fort became the architectural house of power. Around the Old City of Lahore and the fort a thick wall was constructed as a line of defense and 13 gates led into the city itself. The historic gates still hold a heritage value. And mark the trade center of the city inside and around it.

The Lahore Biennial has 13 sites as curatorial pockets to hold the art works. The Lahore Fort is one of them and perhaps the main one. Its dramatic setting and space juxtaposed with the choice of artists and the works is where the story unfolds. That is also the site where the inauguration ceremony was held.

The other sites also are very interesting choices; they are legitimate in their own way; either due to their location, their historical context or the fact that they have some sort of nationalistic associations and official operations. 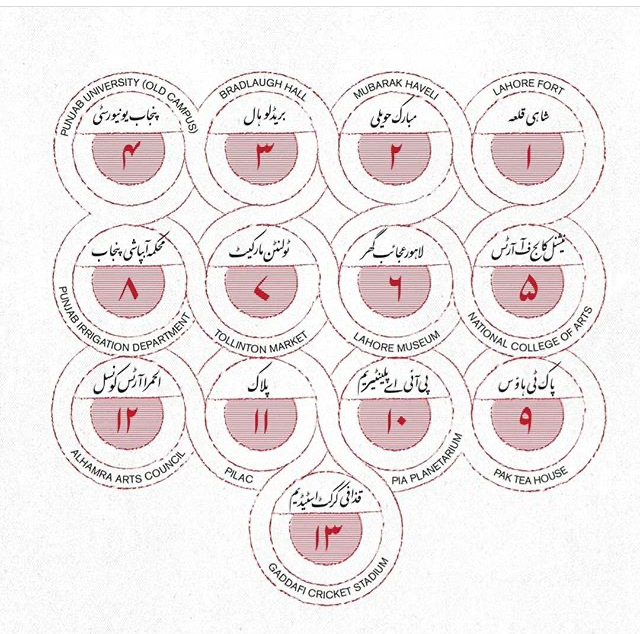 The sites on Mall Road perhaps have all these qualities in them together. The cluster includes the Lahore Museum, National College of Arts, Punjab University, Old Campus, Tollington Market, Punjab Irrigation Department and the Pak Tea House. Some of these sites were also part of the Lb01. This cluster of sites has an appeal to them due to their location, their beautiful colonial architecture and their very rich history. Tollington Market and the Pak Tea House are almost across from each other and they both have a history that links them to pre-partition times in the sub-continent. The Pak Tea house has been the place of leftist discussions, poets and writer’s meet-ups and many more ‘awami’ rendezvous. You take that along with a cup of chai and there is no denying the wholesome experience it serves you. A special menu was served as a work of art during the Biennial at the Pak Tea House. Another work at the Gaddafi stadium site served freshly baked rotis in a clay oven specially set up at the sites. Against the backdrop of a city like Lahore food as Art has always held a very special place for me. One cannot mention Lahore without first speaking of its culinary exploits and gustatory adventures. Food has played such an integral role in developing the reputation of Lahore, as we know it today.

‘Lahore cannot be written about without mentioning the average Lahori’s obsession with food.’ (Shah 2005: 228)

The Tollington Market housed many important works that were a curatorial marvel. They fit very resoundingly in their temporary home of the old warehouse like- marketplace. Barbara Walkers over life-size drawings responded to the architecture of the interior space and make a memorable site-specific work. The curation of the site clearly spoke of works that were connected by many similarities such as a singular voice of resistance and recognition of the underrepresented. The space speaks a collective language of a cultural mobilization at the edge of political and social transformation. It rings deeply of the role of Art, Music, Dance and the accompanying gestures of rebellion that are marked as the Arab Spring in 2000’s. All in all, an expansive representation of artists and artworks from the marginalized- the outer circle has been a particular flavor that Al Qasimi has brought to the LB02.

In the same spirit, we notice the dissemination of mix-media works like video and installation. The Mubarak Haveli became one such hub for a closely curated video show. The resurrected pre-partition mansion is full of many rooms, corners, staircases and arches. The use of unlikely spaces to house videos changed the history of the space into a juxtaposed light and media show. An apt contrast of the object and its subjectivity The Wael Shawky video installs at the Lahore Fort dungeons were another similarly tasting feat.

Rehabilitation took place in unlikely of spaces like government offices and public buildings such as the PIA Planetarium. One of the most stellar shows turned out to be at the planetarium. Multi-media, site specific installs that felt very much at home and in sync with the title of the biennial itself, ‘ Between the Sun and the Moon’.

‘For centuries, inhabitants of these regions oriented themselves with reference to the sun, the moon and the constellations. How might we reflect on our place within the cosmos today, at this conjuncture of planetary climate crisis and polarities between societies?’ said Hoor Al Qasimi, Curator of LB02, Daily Times Lahore. 20th January 2020

The Lahore Biennial has a list of close to 80 artists, collectives and duos showcasing their artworks as part of the curated exhibitions across 13 sites in the city. Over 20 works are new commissions to internationals and local artists. The width and breadth of the event includes not only these 13 sites but also a list of supporting events. The non-commercial nature of biennials as compared to art fairs dictates a wide range of programs that support the art exhibition(s). The LB02 boasts an academic forum with artist talks, interviews, televised programs, film screenings, curated tours, younger audiences visits to the sites, workshops and performances. All these events are open to public and free of cost. It is in this very manner and more that the biennials participate in transforming and informing the cultural shape of cities and in turn develop as essential international exchange and investment in the shape of tourism, ideas and discourse.

The inclusivity that the LB02 has to offer cultivates a very fertile ground for parallel cultural activities in the city. A lot of galleries and independent curators host ‘collateral events’ alongside the duration of the Biennial. This year the Lahore art circle participated in the biennial through an impressive plethora of specially curated art events such as the collaboration between Aisha Khalid studios and the Ikon Gallery, Birmingham. British artists of Pakistani descent visited Pakistan to be part of this show alongside many prominent Pakistani artists. Hamra Abbas had her solo presentation at the Como Art Museum. Zahra Khan from Art Divvy showcased a remarkably curated list of artists at an abandoned cinema in Lahore- the Sagar Theatre on Queens Road. The Biennial developed an ecosystem in the city that enriched and supported such very unique and exciting art events to take place in the air that is already potent for cultural activities.

The true success of a biennial is based on the strength of the people and team behind it. Many of the artworks focused on portraits, photographs and headshots of political and historic figures. Among the works we find many people who made it possible for us to be able to witness those works. The director of the Lahore Biennial, Qudsia Rahim and her vision to see the Biennial through; the advisors and the board of directors, the curator, Hoor Al Qasimi and her wonderful team, the production team down to the carpentry and fabrication unit, the people behind the technicalities, the dissemination of information, the App designed for the Biennial that helps you navigate between the sites and the list of artists at each site along with information about the works. The virtual and the real experiences come together in their strength to bring the visitors and the dwellers of Lahore an art event that could suffice more than two years. As they say, we live in interesting times and that is the reason why we are lucky to look forward to another biennial in two years time.