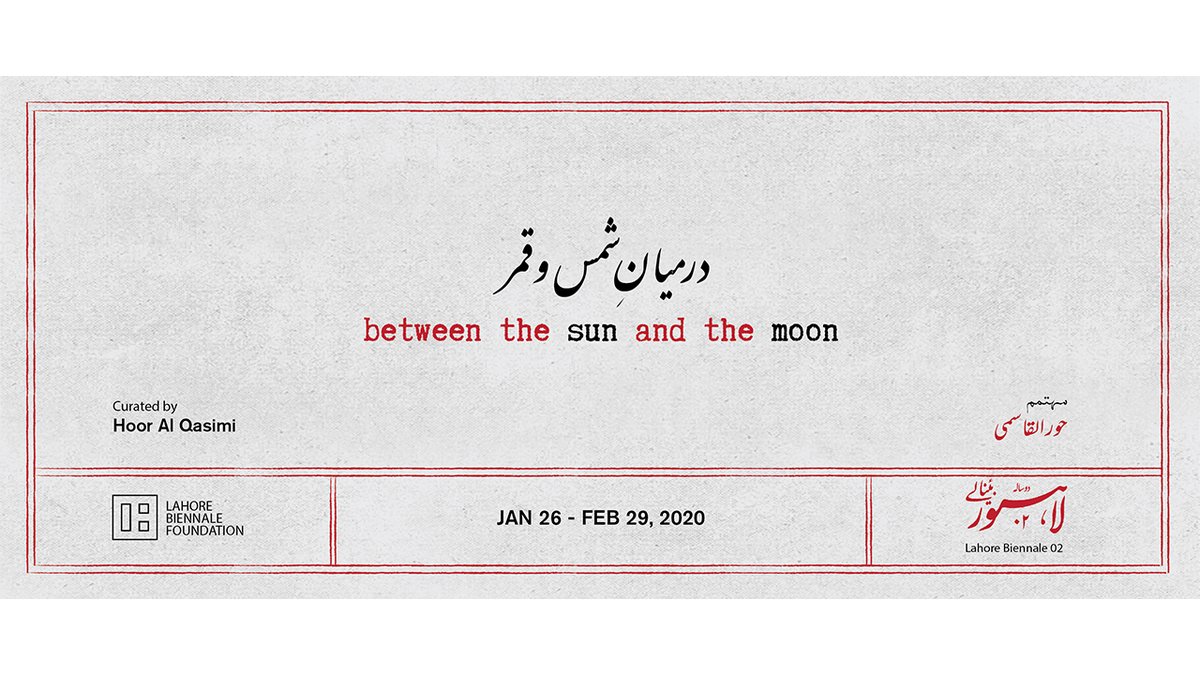 In conversation with the curator of LB02 – Sheikha Hoor Al Qasimi

Shaikha Hoor Al Qasimi, curator of the Lahore Biennale, shares her insights and experiences exploring overlapping histories and cultures with the Global South.

Shaikha Hoor Al Qasimi, Director of The Sharjah Art Foundation is an artist who attended the Slade School of Fine Art and the Royal Academy of Arts. She completed her MA in Curating Contemporary Art from the Royal College of Art, London in 2008. A prominent part of The Sharjah Biennial since 2003, her influence as Director and Chair focuses on cultural mobilization and international artist exchanges for universities, artist associations, contemporary art centres from India, Europe and the USA. The Lahore Biennale Foundation had requested her to curate as her knowledge and expertise would be instrumental in showcasing art installations while simultaneously highlighting important historical sites of Lahore. “Between the Sun and the Moon,” has over a hundred international and national artists spread over eight historical sites from Hazuri Bagh to the Planetarium. The biennale will run until 29th February along with robust collateral exhibitions hosted at various venues.

Nahya Jehangir Khan got to speak to Hoor Al Qasimi for twenty minutes on phone, from her busy schedule she took time to answer a few questions. The following are experts from their conversation:

Nayha: What guidelines on how to explore, absorb and process interacting with public art?

Hoor: it’s important to know the site, to study it and to see how the public is using it. There are some sites I really wanted to use, but then I thought I don’t want to disturb the people and disturb the way they live. There was this one Bara Dari that I wanted to use and it was turned into the Punjab Library. People were using it and if we had put something there, it would have been intrusive. I don’t want anyone to feel like someone is occupying their space. It a place where they study and read, so they cant have noise. All of these things I kept thinking about how to work around others without creating a disruption. The library was off on Sunday and we used it then for a performance. Being present and receptive to the people around you without being intrusive.

Nayha: Fostering and building art programs for communities outside NGO support has been difficult for Pakistan. What insight can you share in encouraging patronage, collaboration, and what role can art institutions play in programming for the community?

Hoor: For me, I don’t know because I’ve come to this as an outsider. I do not know the politics of the art scene. I know there are lots of galleries, a large network of artist groups. Artists that are known are gaining visibility and then there are those that don’t get much visibility. I have five artists who are graduates of National College of Arts, I went to visit them at their college last year and again to the degree show. The idea is for them to build a relationship with the biennale and to learn from the international artists by working on-site with them.

Nayha: Lahore Biennale is creating these connections for artists, among themselves and international artists that are present?

Hoor: Yea, It’s not really about the art elite or gallery scene where they say “Are you invited or are you not invited?” But really it’s about public space.

Nayha: These abandoned and seemingly haunted historical sites have been activated by LBF, how was it for you as an international curator to be given access to these venues?

Hoor: I like to know a city and really be part of it. Now I say, I am “Lahori bilkul” and know my way around. We walked to many places so I know the route I want people visiting the sites to walk. There were certain buildings that I would ask about and the team would say “really?” or Qudsia (Executive Director, Lahore Biennale) would say “that is interesting, we will try to get it.” They understood and reciprocated with tenacity and hardwork. Some sites were not secured until the last minute, often we would have to circle back because an approval would fall threw. Hats off to Qudsia, she would ensure the sites I wanted to use were acquired because they were important to me. I made it challenging for her and she came through everytime.

Nayha: Do you think these site-specific venues can be activated outside the biennale context? If yes, what would be your advice be in integrating them into the art ecosystem?

Hoor: I think so, definitely. I know there have been talks of activating the spaces. When I was scouting, people could not see the potential of the sites. These places were rundown like the Planetarium, it needed so much work and I insisted for it to be used. Now, everyone has fallen in love with it, even the people in charge, everybody has fallen in love with it. We spent the time and effort cleaning up all the sites making them desirable again.

Nayha: Could you share your personal feelings and motivations in championing biennales? Explain how they bring a positive change into the community?

Hoor: In a biennale, you can bring in politics in a very subtle way into the public sphere. It becomes understandable, for example at Bradlaugh Hall I have a screening of a film by Amar Kanwar called “The Season Outside” that looks at the relationship between India and Pakistan, focusing on the Wagah border area. The film examines the borders and related subject matter. Anyone can enter these spaces including the people that live in the neighbourhood, those families that live in the encroachments around the building. These are the kind of projects that are really important.

Nayha: Where do you see the LBF in the future? Do we need to home-grow a Hoor Al Qasimi in Pakistan?

Hoor: The young members of our team said “yea we know, we did this before, we can do this and this won’t take time” resulted in running around to the last minute or 5:30 am in the morning trying to install everything. I told them this is why you need to work hard, you do not assume that you know everything or leave things to the last minute. This is something that happens often in Pakistan, everything’s left to the last minute. There is a lot of waiting for things to happen. And I that is frustrating because I want to tell those young members of my team to not wait for someone to come and do it. They would see me carrying things, doing the work.The priority is opening the show on time. When they saw the exhibition in the end, they understood my vision and potential that I saw in my head.

Nayha: How would you define the cultural economy of Pakistan?

Hoor: I do not know about the cultural economy, it has to do with the market or commercial galleries and I work in the not for profit sector. I do not work in a gallery, I don’t make money or spend money.

Nayha: People need to know that this is hard work and not a glamorous highlife.

Hoor: There are different sides to the art world, you have the collectors, gallerists, auction houses, and then you have the not for profit which are the museums, biennials that are aligned with the artists. A lot of us are former artists, used to be practising artists, I think that is also really important.

Nayha: Why localise and connect history with the Lahore Biennale?

Hoor: The Cairo, Alexandria and Baghdad Biennials were around before Sharjah Biennale. So, it is not like I brought it from the west to Sharjah. The Sharjah Biennale existed way before me. For me, it was more about changing around the conversation so that it was not just an exhibition that looked like an art fair. Having a meaningful conversation and being part of the city. People understand their city but they forget about important landmarks or buildings around them.

Pak Tea House was a place I said I really wanted to use and they were like “Why do you want to use that?” and I said because It is an important landmark and has a history attached to it. Those are the things to bring light through a biennale. Highlight places so that people react to its history and not simply pass by it like they do every day. Same with Bradlaugh Hall, as with the Planetarium. They have these connections with the city but then the conversations that happens within them through the art can bring in another voice. I wanted to highlight Lahore’s beauty and wanted to use the whole city but I had to cut my sites in half. I had 20 to 35 sites, and I wanted the LBF to be everywhere. Having these conversations like the Global Self, people tend to look towards the west for validation and I wanted to make it important for them to see that it is not about the west. It is about us. What are our histories? We have so much shared history and links. That is why I had many artists from Kazakhstan with its link with Central Asia and Pakistan, it’s so important. Artists from Iran, Gulf or India.

Nayha: What potential do you see for artistic and cultural exchanges here?

Hoor: International artists first reaction was to ask me if it is safe to visit and I found that very frustrating. I’ve stayed here during this and I’ve practically lived here. I walk down the streets on my own even during the night time.

Nayha: Ending on, what has been your takeaway memorable moments from curating the Lahore Biennale?

Hoor: During the opening, seeing the works come up and how beautiful everything looked because up until that moment it was all in my head. And then finally to see it up, that moment I will not forget, walking in and seeing Khadim Ali’s tapestry hanging there beautifully, Haroon’s performance at Alhamra, all of the installations, everything felt like it was in the right place.

During the last few minutes of our conversation. Hoor shared her upcoming travelling commitments and desire to have had more time to spend with the art installations. When I thanked her for her efforts and passion seen in the curation all across the LB, she said, “If I do something, I always put my heart into it. I never do anything that I don’t care about. I refuse to do things I do not care about. I put my heart into this and I said to them in the beginning if I do this, I want to do the best biennale I can do. I am not doing it just to do any old exhibition.” Her tenacity and confidence will always be memorable for me as an artist, I wish the Lahore Beinnale Foundation all the best and hope to see Hoor Al Qasimi back in Pakistan.