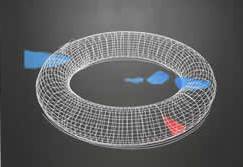 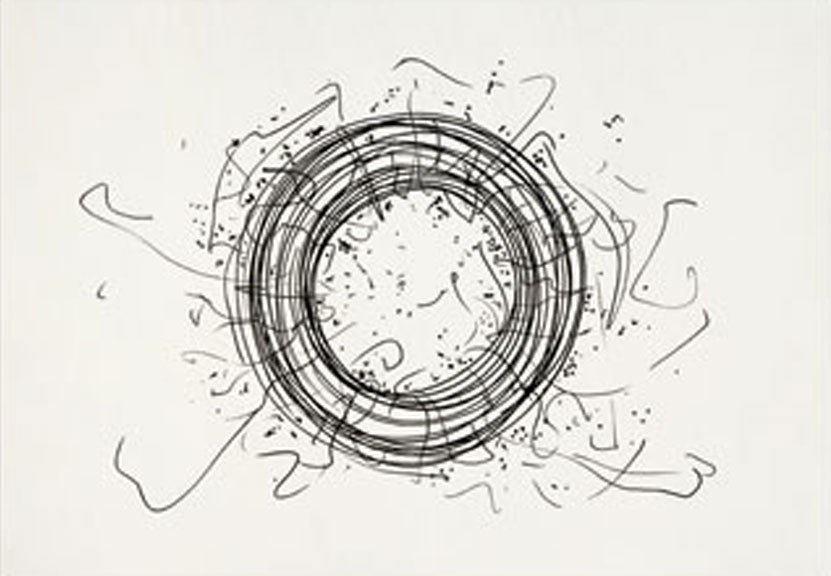 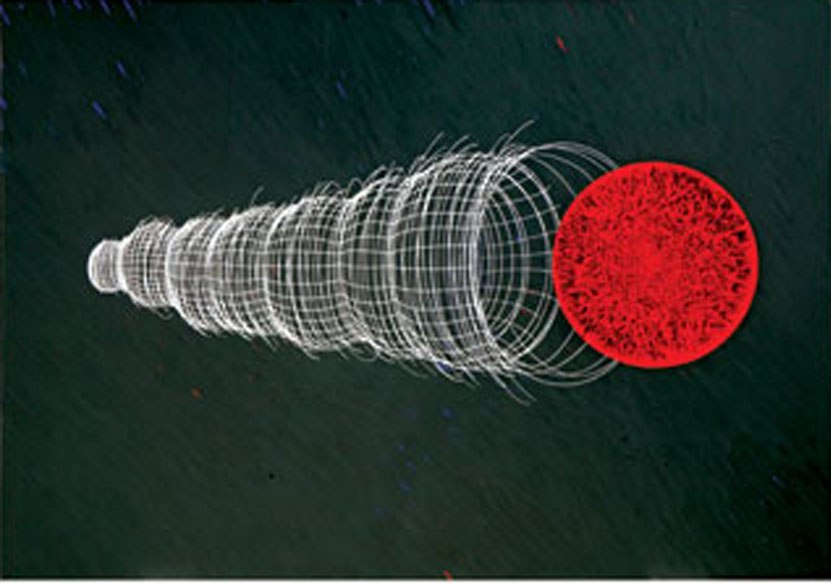 EXPERIMENTS IN SPACE
Imran Mir works in a large, light-filled open studio. The studio walls are hung with works recently completed or in progress; on the balcony outside are sculptures that he is modifying. His house, designed by celebrated Sri Lankan architect C. Anjalendran, shows the same careful considerations of shape and form that we see in his paintings.
Artists from turmoil-driven countries are often asked to respond to the political and social events taking place in their homelands. How does their work reflect their times, is the common refrain. Imran Mir is not concerned with such questions. His work is not representational; he is concerned solely with the visual aspect of art, the language of color and form, the movement of the line. The shapes he employs are common enough – circles, squares, spirals – but without a familiar human figure or landscape to fall back on, his art forces the viewer to really see. Mir’s work is described as “cerebral” and “challenging”. In response to a question about his paintings, Frank Stella once famously said “What you see is what you see.” Mir, who is soft-spoken in person and prefers to communicate through his art, holds to this credo.
After studying at the Ontario College of Art in Toronto in the 1970s, Mir moved to New York, where the main current of art was Minimalism. Minimalism was the forceful new ethos of the 1960s, setting its face against the prevailing movement of the 1950s, Abstract Expressionism. If Abstract Expressionism had been bristling with nervous energy, what critic Harold Rosenberg dubbed the “anxiety of action painting”, Minimalism and its close, though somewhat older cousin, Color Field Painting, was cool, in control, finely honed. Minimalism also revolted against Pop Art, the other major trend of the 60s, viewing with icy disdain the fetishizing of the object, the drive to make an icon of the commodity. In the works of artists like Donald Judd, who saw himself as neither a painter nor a sculpture, Minimalism sought to be painting beyond painting, a clarification of line, color and form and a pure engagement with space.
From this perspective, Imran Mir is a minimalist painter. He started off as painting typical representational works, but quickly abandoned this for an abstract style. His explorations and experiments are not of specific, individual objects, but of classes of objects. His “Papers”, as different series are titled, are careful studies of particular issues. The paintings are vast in size and seemingly simple in execution, which belies their complexity of structure and movement underpinning them. A constant thread running through the works is the ideas of variation within repetition. His earliest exhibited works were tonal monochromatic paintings, exploring subtle variations in color and shade cut through by bright lines of color. The Seventh Paper series in the 80s moved in a slightly different direction, offering what appeared to be a private, esoteric language. Featuring pyramids and circles, the forms verged on mysticism. They were abstract, but with an element of landscape. The Eight Paper series brought the human into the paintings, with finely drawn hands centered against a colored background. After that, the human and the artist again receded into the background; if a figure was depicted, it was the human as a symbol. The most recent works are even more spare, with all exogenous elements removed; the paintings are pared down to basic shapes against a stark colored background. The surface is so smooth as to look almost digitally printed, but that is the result of much painstaking labor by hand and careful application of paint.

Yet those tensions one sees in Abstract Expressionism are also apparent in Mir’s paintings, though in a reworked manner. There’s a tension between chaos and order, of wayward forms being brought under control but constantly threatening to escape. The tight structures of squares and circles tremble with energy and the desire to break down, join together, get tangled up. His work is described as Geometric Abstraction, but what it most closely resembles are the subatomic particles of physics: electrons furiously orbiting an atom, photons shifting from wave to particle. It is as if he is presenting quantum entanglement, one item at a time, but always with the reminder that in the background, against that stark black or red space, is the menace of entropy.
Mir’s work takes up many of Minimalism’s formal concerns, but borrows from Pop Art its blocks of strong color, bold lines and graphic designs. He has years of experience as one of the foremost advertising professionals in Pakistan, and since Pop Art took its inspiration from comic books, graphic design, and advertising, his affinity to its language is not surprising. His work shows how important it is for the artist to be able to borrow freely from the world at large, and not be confined to a one-dimensional identity, such as that of the ‘Pakistani’ artist seen through global eyes as being from a land both menaced by and producing terror. Many contemporary artists today are in danger of falling into such a trap. Similarly, if he uses Geometric Abstraction in his work, it does not mean he is referencing the abstract aesthetic of so-called Islamic art. Imran Mir’s art creates its own language, though one accessible to anyone. All one has to do is learn how to look.