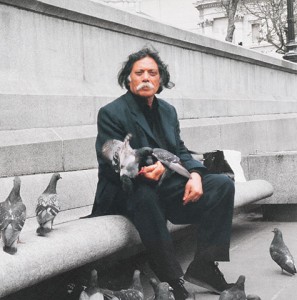 What Susan Sontag wrote 1998, about a fellow writer, can be stated for painters also, particularly for Jamil Naqsh. Who remained a constant traveller, moving to London in 2012, and now moving to other world on 16th May 2019. But even when he was at home (in Karachi or London his art travelled far, destinies not possible to cover for an ordinary mortal. The moment he placed his paint brush on bare canvas, he covered a distance five thousand miles from his house in London to the Indus Valley, and went back in time, five thousand years before, in the age of that civilisation.

In order to do this, one needs to have a vision, view and will superior to one’s physical restrictions and geographical boundaries. Jamil Naqsh had many flights of fancy, all of his work is about moving away from one’s limitations. In his paintings – bird, pigeon to be more precise, is a metaphor of freedom, for a soul to break away from its confinements, and levitate to unmarked territories – of sky. Where there are not national borders, no regional barriers, no entry points, no security checks. A bird is an ideal creature for someone like us, who are chained in conventions, customs – but more than these, in our fears and insecurities. Jamil Naqsh through this symbol, reminded us that in each of us, resides a bird, a beautiful creature – or you may call it imagination, dream, desire, which we have caged for multiple reasons. We need to look at his canvases, to realize that there is a world beyond our own. Or restrictions, imposed by others. And even if our bodies are fixed at a location, our minds can break the barriers.

But our bodies too. Naqsh introduced us to this possibility as well. To an ordinary viewer and a superficial commentator, he is the painter of nude figures, but in his paintings, body is pure body, devoid of any religious, national, linguistic or economic identity. A difficult task for all those who view and judge others on the basis of faith, passport, accent, and cost of clothes. Jamil Naqsh liberates a human being from these labels, and presents him as the prime example of God’s creation.

Did I say him? actually it is the woman which we see in his work, rendered in multiple postures and compositions. American art critic Arthur C. Danto observes “one cannot look at the painting of a naked person simply as a painting”, especially in our context where public nudity is not possible; if a painter is portraying female nude, he is challenging norms of a society that has curbed freedom of expression, in words, acts, and images. Through his example, his courage and his persistence, Jamil Naqsh showed how an artist, a creative person, an individual can choose what to say, express, paint, and do, against all odds.

Although, and apparently Jamil Naqsh never painted a political painting, but for me, his work – has a political significance, since it represents individuality, freedom and pleasure of a creative person – terms, which are not normally acceptable by a society that has experienced the oppressive period of eighties. His paintings of nude, made in Karachi and London, are the sign of a person who looked at the flesh and enjoyed to render it; and are the finest specimens of figurative art in Pakistan. But more than that these are the paintings of resistance. Marks of an individual who followed his vision, views and imagery in spite of official restrictions, state censorship (lingering from Zia’s regime) and general and moral pressure. I feel it is the art – only the ‘high art’ that survives the forces of bigotry. Thus, it was a profound moment to see Jamil Naqsh’s retrospective at a public art space, the Mohatta Palace Museum (curated by Marjorie Husain in 2003). His work is also a testimony that if you are attached to your subject deeply, and exploring it honestly, you would succeed. To the level of never dying.

Artists are made of a very hard material. They never leave. They just shift their locations. Jamil Naqsh moved to London in 2012, and now from this world to the world of eternity. Yet he would live among us, in each stroke of his incredibly constructed canvases. I remember meeting Jamil Naqsh first time at his studio here in Karachi almost twenty years ago. In my eagerness, and ignorance I asked Naqsh, if he is not bored by painting same subject, female figure and pigeon for years? Jamil Naqsh, sitting on the floor in his shorts and T shirt, looked at a pot of money plant at his side, took on leaf in his hand, rubbed his finger on it, and said. “I have been painting this also for years. When I am able to make it, I will do something else.”

I understood that it is not the appearance, but the essence of reality that Jamil Naqsh was seeking. A reality that resides in each of us, although we are reluctant to look, and locate it. Jamil Naqsh provided that mirror to recognise the essence of ourselves. Now has gone, but his work will keep on giving us a perpetual pleasure. Thank you, Jamil, for reminding us that how worthy and natural it is to have achieved this and other freedoms, which otherwise are considered hard, unimaginable and impossible – but not anymore!