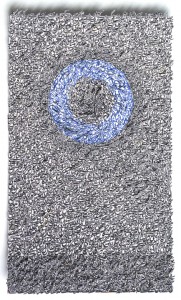 Flair and fortune enact a massive role in the livelihood of a prosperous artist; however, initiative and resolve are key. At his solo exhibition titled Gunjaan at the Aicon Art Gallery in New York, artist Ghulam Mohammad produces delicate and intricate collages of hundreds of individually cut out Urdu alphabet letters that he pastes upon hand crafted wasli paper. His collages look like impenetrable miniature carpets created by striking calligraphic script. It is a challenging, demanding and intense procedure but the process is what Mohammad is devoted to. The subsequent works are a phantasm of letters, anticipated to allure spectators and drive them to look attentively. Mohammad (born 1979) was projected to international eminence in 2016 when he acquired the desirable Jameel Prize, awarded by the Victoria & Albert Museum, London.

Language is dominant and an advantage to self-reflection because we as human beings use it to connect, to form bonds and associations. It has the power to equally fuse and distribute people, and Mohammad’s own capabilities of attempting to familiarize himself with the Urdu language while growing up in Balochistan appeared to make the cultural chasm concerning himself and the culture to which he was trying to adapt to that much more demanding to link. He found that while the rudimentary letters were the identical, their amalgamations, enunciation and connotations were dissimilar, encompassing the social gap between him and the unyielding community within which he was trying to engage himself.

Mohammad breaks down prevailing, comprehensible manuscript into its tiniest solitary letters before bringing them together in configurations in his collages. He reconvenes current texts to create new arrangements. This is by enlivening neglected books into his collages. For him this is a meditative process.

Resolute and calm, Mohammad is undeterred by the toil and discomfort of sitting all day, he seems to celebrate in the act of the making, his work is process-based and that is of great meaning to him. He feels the progression is contemplative as he becomes submersed in his work. Assets such as endurance, persistence and patience are crucial.

The individual letters that form Mohammad’s collages are cut out from old Urdu books about language. Spending a lot of time at the Anarkali Bazaar in Lahore, he rummages for the suitable texts through the stands of multiple booksellers. These books are often handwritten and have been rejected by their preceding vendors. He relishes surveying diverse Urdu scripts, exploring the narration, expansion and importance about the forms of calligraphic writing. It is a fact that languages create margins and estrangements, but they can also generate enticements. It forms meanings within society and culture.

In the piece Gunjaan (Jam-Packed), the exhibition’s title work, the Mohammad recollects the different symbols that point to road bottlenecking or overcrowding, when entering a city. This bombardment of text and thickly- packed cityscape enlighten the abundance of collaged scripture in this work. His usage of negative space to evoke text is a uniting idea within his composition.

Mohammad works with the susceptibility of manuscript. These minute pictorial ordinations are a mystifying coppice of codes. The ghostly desertion of script overall rears inquiries about absenteeism and elimination. Noteworthy amid the works on exhibit are two hand-woven carpets that branch from some of Mohammad’s original trials with paper collage. The larger piece measures 13 feet and interlaces together subsequent scripts from the numerous languages spoken and written in Pakistan. They are pressed together through their use of Arabic script. This unification, while mystifying the significance of every distinct text, is spun into a purposeful entity.

Papyrus, parchment or paper as a medium emphasizes the notion of narration and antiquity entrenched in the manuscript. The enigma of language transmitted into the clandestine of the mark. The letters are compacted in ways suggestive of bayyaans/kahaaniyaan or stories which are eternal. Mohammad through hus body of work investigates the opportunities of material and language, both being primary subjects and consequently distorts the fences between practice and thought.

Note: All images are courtesy of Aicon Art