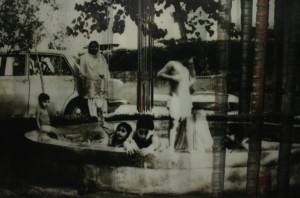 Eight Pakistani artists in the heart of Italy

Few month back, the Italian art foundation “ARIA – Fondazione Industriale Adriatica”, asked me to take part of a project conceived by Raffaella Cascella and dedicated to Peace and to cultural exchanges: “Stills of Peace and Everyday Life”.My mission was to invite some contemporary artists from Pakistan, working with digital techniques, who would at the same time tell about Pakistan, investigate on universal matters and create a cultural bridge between Italy and Pakistan.

Together with the other curator, Antonio Zimarino, we tried to establish a dialogue between the Pakistani art-works and the photographs and videos from the Italian artists previously invited by him. Emanuela Barbi, Massimo, Camplone, Sergio Camplone, Mandra Cerrone, Paolo Dell’Elce, Barbara Esposito, Attilio Gavini, Iacopo Pasqui and Giovanni Sacchetti are resident in the central region of Abruzzo, their research is mainly based on photography, video installation or performance.“The language of the Italian artists finds a specificity of the search for meaning: returning to the roots, to the essential issue, the possible reconstructive hypothesis.” says Antonio Zimarino, summarizing the work of the artists he selected.

The location also played an important role in the definition of the show inaugurated on the 10th of July to the presence of the Pakistani Ambassador in Italy, Ms Tehmina Janjua, the council members and the Mayor of Atri, and some delegates of the Abruzzo Region. In fact, the unique space of the ancient Cathedral Crypt of the historical town of Atri, that originally served as cistern to collect rainwater, contributed to give prestige and sacredness to the unprecedented event.

In this very special atmosphere all the works create a very positive balance and a strong harmony with the surrounding. Most of the projects totally merge with the space. For example, the site-specific installation by Emanuela Barbi that ponders on the importance of water through two fragile, transparent bell jars and a column of shells that rises from a stone of the ancient structure up to the ceiling.

A similar aesthetic effect results from the projection of the video by Naiza Khan. “The Observatory”, is part of a series of works on Manora, a now abandoned island situated opposite the city of Karachi. The space that host the show, incredibly rich of history, accompany the poetic images of the formerly observatory of the island. Strategic at the time of the British Raj, the building has been heavily affected by the passage of time, symbolizing both public and personal transitions.

Despite the limitations imposed by the choice of media, and thanks to their heterogeneous backgrounds, I believe Sajjad Ahmed, Farida Batool, Shalalae Jamil, Lali Khalid, Nadia Khawaja, Naiza Khan, Aroosa Naz and Risham Syed represent an exhaustive cross-section of the contemporary national scenario.

Using modern digital media, the artists in the exhibition recount tradition, history, everyday life, and irreversible, unstoppable changes and their consequences. They are rooted in their territory but at the same time projected towards the outside world and the future. Their works tell a local story – each in its own way – but leave ample space for reflection on the human condition.

The digital compositions of Sajjad Ahmed analyze the impact of globalization at local, regional and worldwide level, and demonstrate how images have become the stars of this new era in which it is “vital” to communicate quickly and extensively. Thanks to a special printing and directing technique, Farida Batool achieves a direct comparison of different situations, often in contrast, highlighting the paradoxes of contemporary life. The artist juxtaposes family photographs, depicting moments of her childhood, videos of personal experiences with images of more recent moments, of different places or which have changed profoundly in many different kinds.

To carry out her intimately personal research, Shalalae Jamil looks at her life and that of her family members. In her videos and photographs she hints at the somewhat uneasy relationship with the religion that marks every aspect of daily life for Pakistanis, also in light of the gradual radicalization that the country has experienced since the late Eighties. The photographs of Lali Khalid are also a kind of diary in which the artist questions the roots of her culture and its contradictions, but at the same time seems to find comfort in its reassuring traditions.

Aroosa Naz is fascinated by the increasingly diffuse parallel or simultaneous realities created thanks to the evolution of new media and state-of-the-art technology. Through these same media, her works highlight the daily interference between these reality-fictions and our real-lives, and any cultural clashes that arise. The digital prints on jacquard produced by Risham Syed are photographic images taken in the urban area of Lahore. They immortalize work-in-progress, maintenance, construction of new buildings or widening of the roadway. To recount a contemporary urban landscape that is constantly changing, the artist has chosen a nineteenth-century technique that gives the images an aura of history, static and timeless.

“Stills of Peace and Everyday Life” will be visible in Atri until the 11th of September 2014.