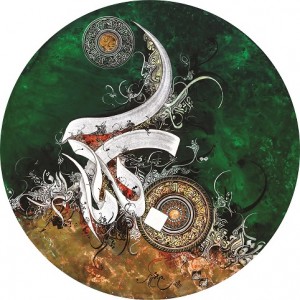 Satrang Gallery’s annual Ramadan Calligraphy exhibition this year featured two heavy-weights of the calligraphic world, along with two rising stars. Rasheed Butt, Ahmad Khan, Arif Khan and Tahir Bin Qalandar offered up their work for appreciation in the marble arches of the gallery.

Asma Rashid Khan, the show’s curator and gallery director has chosen the mix of works well, so that viewers have a taste of the traditional, intricate works of Rasheed Butt, which echo the splendor of the great illuminated Quran’s of the past, and also works where the artist is more visible, such as those of Bin Qalandar .

Bin Qalandar’s works instantly stand out in the show, not only for their large canvas sizes, but because the works are commanding in and of themselves. Although his works are clearly stamped with the Arabic style, there is a breath and movement in them that reminds me of the meditation reached by Chinese and Japanese calligraphers as they work; each stroke is a breath, a communion. In his large, circular Surah Rehman, Bin Qulander uses a familiar palette of green and white, contrasted with small areas of reds, and a lower canvas of earthen tones. The free strokes of the larger calligraphy are clean and crisp, yet have movement and power; they almost look three dimensional.  The smaller, free-form calligraphy creates a floral impression while the two circular insets show the artist’s traditional capabilities and training in calligraphy. Bin Qalandar said in his artist’s statement for the show that it was his aim to prove that calligraphy is not just a craft, but an art, and with this work he has done just that.

Arif Khan has the most free-form style of the four exhibitors, almost verging on abstract. Bright, raw washes of color grace the canvas in unhindered flow, and calligraphy is etched into the still-wet paint to leave the calligraphic words in the white of the underlying background. As with Bin Qalandar , Arif Khan uses larger words as a central focus, with smaller script adding detail around. He likens his process to making music, and this is a good simile of the symphony of color, form and texture achieved in his mixed-media pieces.

I fell in love with Ahmad Khan’s work when I first saw it hanging on the wall of artist Sana Arjumand’s living room. It has the kind of attractive power that can keep you mesmerized. Khan showcased three works in his familiar style in this exhibition and each one captures you and draws you closer. His two blue-hued untitled works seem to capture the luminosity of the moon, and even though there is a cloud of deep russet calligraphy above, it doesn’t affect the coolness exuding from the canvas. His technique, utilizing silver and pigment, really makes the canvas shine and it is clear to view his work, why he is considered one of the masters of this art.

Lastly, Rasheed Butt’s work brings the traditional forms, colors and techniques of calligraphy alive in all its formal glory. Butt is well-known as one of the finest living calligraphers in the Islamic style, and seeing his painstaking work up close is a privilege. His floral, filigree-like work on the background of the Hilya Sharif (PBUH) is exquisite in detail, every stroke a testament to his mastery. I was interested to see the large rendition of Surah Ambiya ‘ Ayat 92, which was a contrasting black and gold geometric style work. To me this shows more of the creative capability of the artist, as it is hypnotic almost like an optical illusion, which still maintaining the technical perfection Butt is known for.

The Hurouf exhibition, which continues throughout the month of Ramadan, not only showcases a variety of work, but really speaks to the possibilities of the calligraphic art. There is such huge scope within this art form, and not just as a craft or as a decoration piece. As Bin Qulander stated, each letter in the Arabic script has its own meaning, its own secrets and anatomy, and each artist will approach it differently and find different jewels within to share with their audience