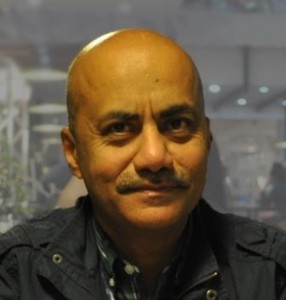 If you were to walk, always in one particular direction in a park for several years, the moment you decide to take the opposite uncharted path, you would discover a different park altogether, almost unrecognizable. And uncomfortable to some extent. Although the same place, but an unusual interaction alters the perception of a familiar space and turns it into strange surroundings.

In a sense the same phenomenon takes place when an artist is invited to an Artists’ Residency. For a number of years – or months, he has been working in his studio space, using regular materials and preferred tools, and producing objects which are in connection – rather continuation of his past practices. An ideal setting – till it is disturbed and disrupted by a call to join a residency. Now the artist has to say farewell to his comfortable environment, fixed work space, routine hours, and everyday companions, in order to explore something new.

Often what is explored, in reality, is not always exciting or too presentable, but the whole idea and premise of an Artists’ Residency is to move a creative person away from his ordinary world and to experience a segment of extraordinary not only in terms of art, but in life too.

Just the fact that a person has to abandon his home, studio, city (or country) and reside at a different (and difficult in some cases) location, interact with people (unknown and alien) for a certain period, and rely on material/mediums which are not of his choice or temperament, is crucial to examine one’s art and ideas. In most instances artists are so used to living in a certain place, and create what is demanded and expected from them, that their works start to turn/end up in to a circle of repetition. One is aware of examples involving many artists, some well-known names also, who are recycling their imagery in varying scales and materials.

Artists’ Residencies in that respect function as a savior, to provide an occasion for artists to reflect on their art, creative approaches and attitudes. The physical distance and detachment from their comfort zones, serves to view recent past and personal settings in a different way. It also inspires them to experiment into something, not possible otherwise – or in normal circumstances. Thus it is not surprising that sometimes participants of these residencies enjoy short-term affairs with their fellow artists, while being committed to their regular relationships.

What takes place in human domain is repeated in the realm of art too. In Pakistan and South Asian region there are a number of Artists Residencies, which offer artists from the region and outside to have a dialogue with each other, in a new location and with their art – employing a new vocabulary. Hence what comes out may not be ‘presentable’ in terms of exhibition and collection of art, but it suggests and envisages unseen dimensions in the aesthetics of a creative individual. So Vasl Residency, Sanat Initiative, Murree Museum Artists Residency, Avant-Garde and Kitsch, and several others such projects in Pakistan are offering venues and opportunities for artists beyond their usual existence.

In a sense these residencies – the theme of present issue of Art Now Pakistan – fulfill the gap between art institutions and art market/world, by providing venues to realize and recognize one’s individual and unique voice/idiom. Role and contribution of these initiatives are discussed in the two essays by writers who were part of residencies in the past. Likewise, in the Profile section, the focus is on personalities, who along with making their art have been involved in establishing these residencies. Institutions, which are important not only in the world of art, but are effective in social, cultural and political hemispheres too. For example in 1998 a Pakistani painter was invited to Khoj residency in Modi Nagar near New Delhi. Here another Indian artist, from Bangalore was using photography by working with a local photographer; but being from South India was unable to communicate with the local him. So the Pakistani painter used to translate he English in his Urdu, understood by the Indian photographer as Hindi, who responded in the same tongue, which was translated by the Pakistani into English so the South Indian artist could comprehend.

The Pakistani participant told his Indian friend: both of you are from the same country, but me, despite of being a foreigner had to translate between two Indians. An apt example of how our social, political, ethical and cultural differences are questioned, challenged, and examined in these artists residencies.