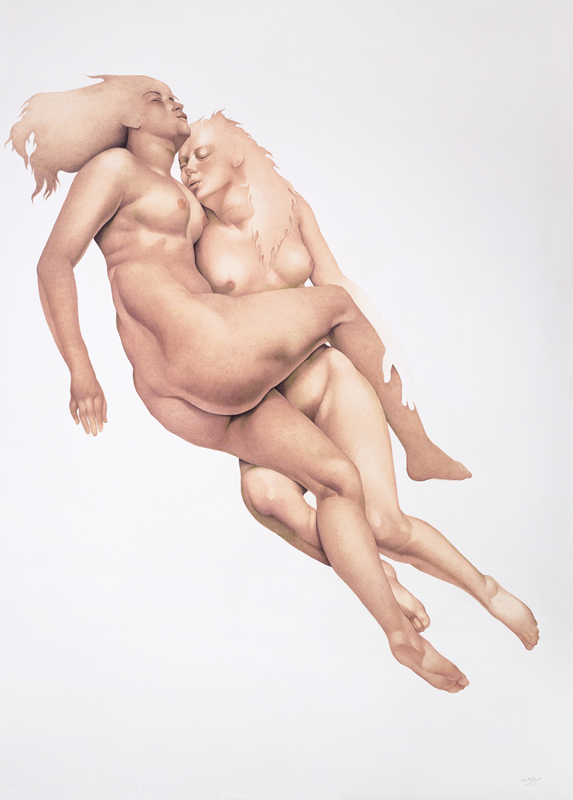 Inspired by the realism of the 19th century and the works of Da Vinci and Rodin, Hasan’s current body of work pays homage to western Old Masters such as Degas and Rubens along with 20th century painters such as Lucian Freud and Jenny Saville.

Upon entering the intimate space of Grosvenor Gallery, London, the viewer is immediately confronted by Irfan Hasan’s sensual paintings of the nude male form. The works are spectacular. They hold the viewer’s attention, leaving one hungry for more. The first painting, Equality Before Death – After William Adolphe Bouguereau, bombarded my senses. Two figures, the first a dead man and the second, his spirit coming back to cover his dead self. These forms have been painted in lifelike flesh tones in a traditional technique called gudrung, an opaque watercolour painting method from the Indo-Persian school of miniature painting. The beauty of Hasan’s paintings is his ability to handle paint with such sensitivity that he is able to create a feel that gives the subject a spirit-like quality. He also examines every contour of the human anatomy in extreme detail. This study is especially reflective in a painting titled The Young Greeks Attending a Cock Fight – After Jean Leon Gerome. The painting depicts two young men pushing their cockerels into a cock fight. The men are the embodiment of the Greek ideal and the eye lingers at the brush strokes that Hasan has employed. This piece is also a departure from Hasan’s earlier work, and that on display in the show, as a result of his use of colours to depict the birds.  His skill in depicting realism is at its peak with the cockerels and in stark contrast to the consistent monochrome colours used to depict figures in all his work.

Another one of his stunning works is called The Sleepers – After Gustave Courbet. Here, two women are in a passionate embrace. Hasan’s profound use of gudrung has added a translucent texture to the women’s voluptuous bodies.

Hasan also works his magic on the smaller portraits in the show. A Portrait of One of the Three Wise Men – After Peter Paul Rubens has a mystical appearance to it. Similar to the nudes, the portraits are translucent in quality.  Hasan seems to have captured their soul.

What is fascinating is that during his years studying at the National College of Arts, Hasan’s only access to western art was through misprinted magazines and rejected art books sold in the markets of inner Lahore. He has never seen any of the original works that inspire and influence him. This is remarkable and speaks volumes about the artist’s calibre.