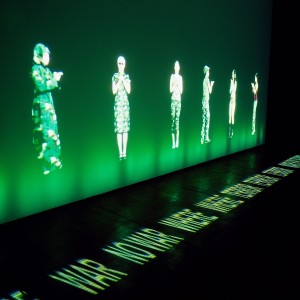 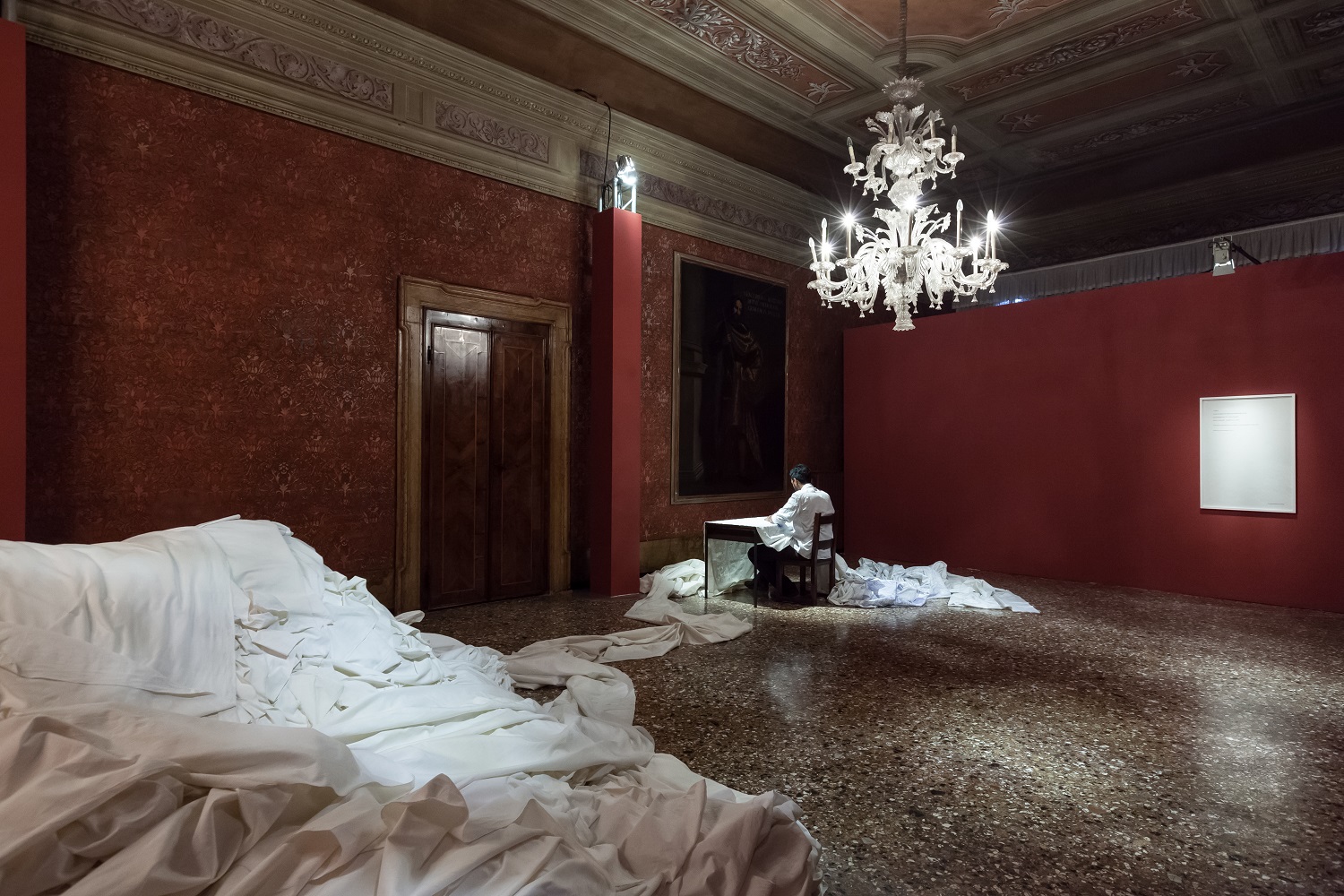 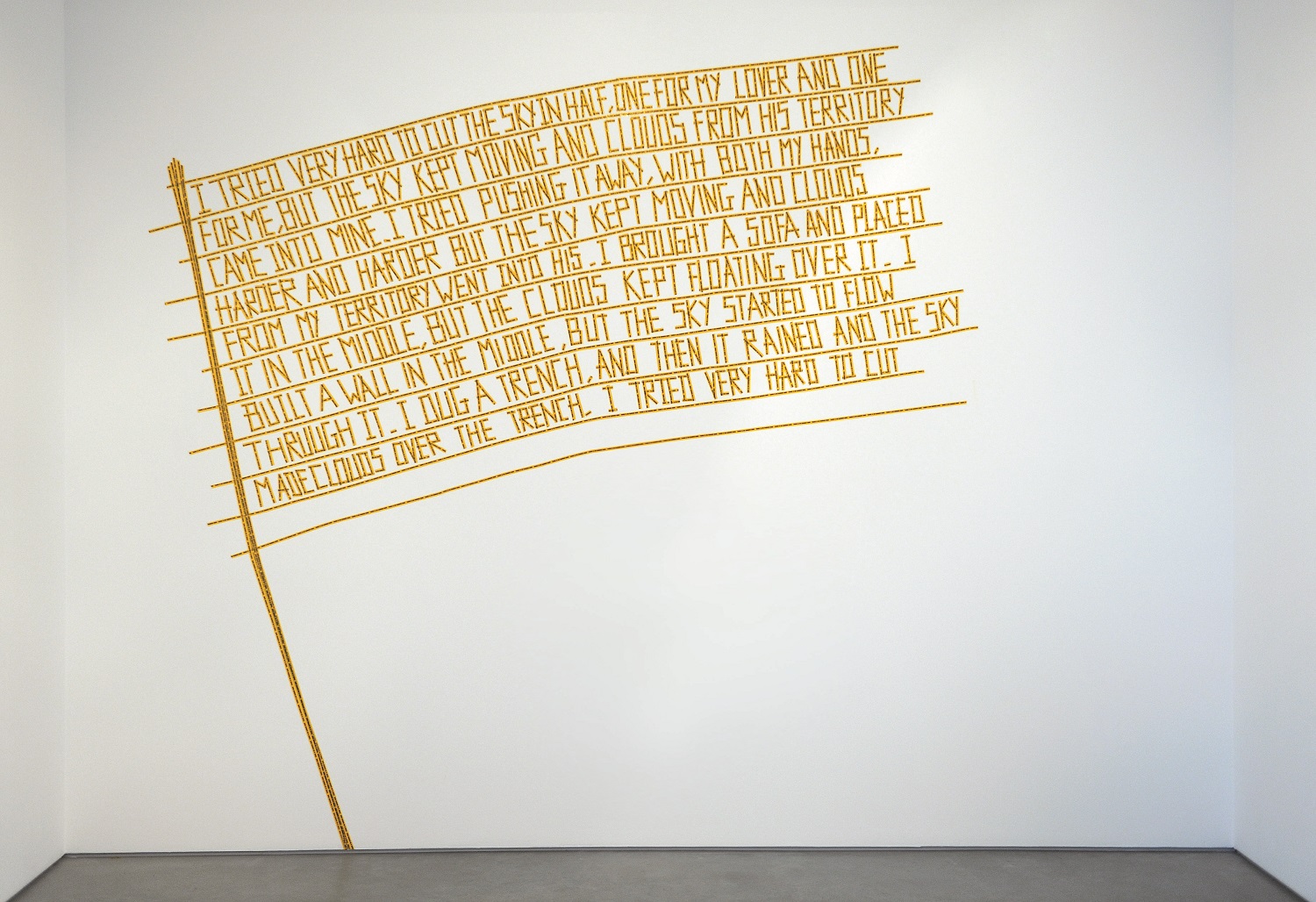 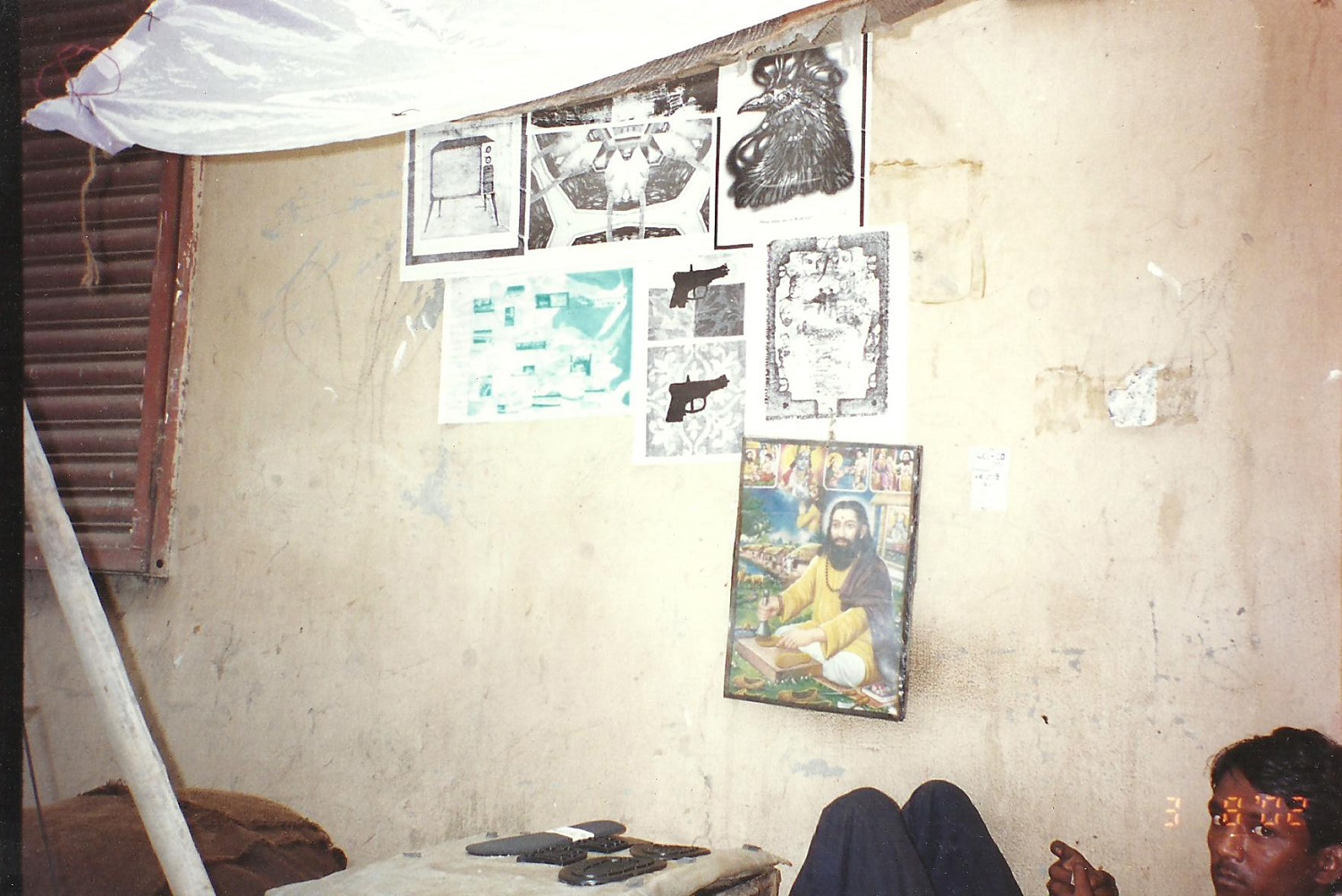 “When you are in Mumbai, please do call my friend and go see her work”. I followed the advice of the Pakistani artist, telephoned her friend at 5:30 pm, and soon left to meet her in Bandra, assuming that I be back in my hotel for dinner. But that day I missed my meal, because her work kept on captivating me as I continued to explore different aspects of Shilpa Gupta’s art.

But can we call her work art, because in its essence it defies – yet (re-)defines – the term art. I remember seeing her work for the first time in ‘New Indian Art :Home-Street-Shrine-Bazaar-Museum’ at the Manchester Art Gallery, 2002. Curated by Gulammohammed Sheikh, the exhibition included a large number of famous and familiar artists from India. Among names and works, which were known, I came across an installation, Untitled, which in its content and form was different from the rest of the exhibits. Created like an interactive piece, the work alluded to social and political realities in a narrative that was subversive in terms of established art forms.

This early introduction to Shilpa Gupta culminated when I encountered her work at her house in Mumbai (2005). Usually, it is perceived that Indian art schools are conventional in comparison to other places, even though there have been brilliant exceptions such as Baroda School of Art; yet J.J. School of Art is categorized as one of traditional institutes. Shilpa Gupta studied sculpture there (1992-1997), but even in her student works (displayed at her degree show) she addressed the issue of art as art along with its presence, power and participation in a society. Thus it is not surprising that soon after her graduation Gupta became as one of the most represented artists of her generation in India, with works shown at various important international exhibitions.

In an interview with Plinio Apuleyo Mendoza (The Fragrance of Guava) Gabriel Garcia Marquez comments that an author writes only one piece of fiction, each time in a different way, and expresses that his ‘novel’ would be about ‘solitude’. Taking this example further, if one speculates on the art of Shilpa Gupta, it would be about power, whether of state, terror or other factors. In some of her works the subject of terrorism is approached in such a scheme that it negates the stereotypical definition and description of our contemporary conflicts. Here the sensitive issues are not dealt with in a remote or distant tone Actually it is the artist, who instead of commenting on the crucial questions of terrorism, enters her own work and becomes one part of it: A soldier girl, owner of a suitcase with the text declaring ‘There is no explosive in this’ or a person distributing blame bottles. The interactive nature of some of her works also suggests how the artist, instead of being a voyeur – and inviting the spectators to be participate as voyeurs – wishes to participate in the art work, the art world andthe world at large, and to be a potent player in changing the existing order and power.

Gupta has been engaged with the consequences of power and its common perception. In one of her interactive video installations (Untitled, 2004-05), the figure of a young female appears in a variety of attires, changing her roles (rather her reality), from a youth of Mumbai, to a bimbo, and to a fighter wearing army fatigue. These characters perform separate roles, yet one can see behind all of these the uniting figure or personality of the maker – Shilpa Gupta. In another work, a girl in camouflage clothes with a cap moves her hands as if holding a gun or shooting. Both of these works and others of such kind allude to the growing fascination with violence as an attitude in our societies, whether this violence is found outside, in the world around us, or in front of us – on the T V screens, or within ourselves – and a kind of longing for it. Gupta gathers this search/surge for violence when she depicts herself in a character that is engaged in multiple actions – mimicking to aim, hit and kill with her bare hands. All these gestures are communicated through her fingers, without holding a weapon, much like shadow play in dark. But the whole idea of not holding a gun, yet indicating the killer’s instinct/gesture is important in order to decipher the essence of her work; because it indicates the potential of violence in our environment.

Violence in Gupta’s work, much like in today’s world, trespasses frontiers. It is not contained within one nation or territory. In fact, it emerges as an attitude, without knowing religious differences or racial discriminations. It is a wrong analogy, but like the wind, birds and sunshine and the Big Mac, it does not recognise national boundaries. This altered view of the world is pointed out in the work of Shilpa Gupta, when she maps a location with the adhesive taps, printed with the text There is No Border Here. Paradoxically, this message about the demolishing of barriers is written on a material that is often employed to bar access to certain area. But Shilpa points out the way world is designed/devised in our era. As for political reasons, the regions are marked with their national borders, strict lines that cannot be crossed without travel documents obtained after a tiring routine but for fundamentalists, these lines of control do not exist or pose any restrictions. They travel to their target sites without any legal documents, thus the sticky tape proclaiming There is No Border Here, if on the one hand illustrates the custom of terrorists in our environment, at the same instance signifies the power and ease of multinational organizations, which operate without any limitations/respects of national borders/customs/norms.

In fact the matter of the border, which has become rather irrelevant in reference to non-state actors today, has been an issue in terms of relation between Pakistan, India and Bangladesh. Families, languages, customs and conversations which many try to resume have been split because of these borders, and it still requires a great effort to amend a broken relation/connection. In her work from the 56th Edition of the Venice Biennale 2015, under the general title My East is Your West Shilpa Gupta also addresses the idea of separation, especially partitions in the Subcontinent, which not only sliced the land, but any imputed shared history. The common past somehow becomes a uniform present for subversive motives and illegal activities, as not only terrorists but traders of banned items do not recognize borders between countries. Not only those, but a number of others also cross the line that separates one region to other, particularly in places where communities have a common culture and language, as is the case between Bangladesh and West Bengal in India. Shilpa Gupta in her work deals with these contested grounds where the territory turns into terror. In one work, a three thousand three hundred kilometre long fence between the two countries is documented in a shredded hand-woven cloth, as well as the blinding fog from a no-man’s-land preserved in a box, allude to how these demarcation on land cause problems yet can be conquered clandestinely. At the Venice Biennale, Gupta created a number of drawings made with a cough syrup that is banned in one country and allowed across the border. A practice that reminds Zizek: “in the much-celebrated free circulation opened up by global capitalism, it is ‘things’ (commodities) which freely circulate, while the circulation of ‘persons’ is more and more controlled”.

Whether these are routes of illegal immigrants and smugglers, floodlights that dazzle anyone standing at the edge of his country, or chunks of gold, the work of Shilpa Gupta is about the separation of two countries, but it also addresses the segregation of a single province, Bengal, cut into Eastern and Western halves, resulting in two different countries. Along with the shared past it is the language that connects the two, because no matter how much a region is dissected, the language functions as the common currency between separate, or warring states. Hence more than the national identity, it is the linguistic identity that serves as a binding – if not the blinding – entity among diverse sections of society today.

But even though how much we recognize and connect with each other through a common tongue, there is still a power of national border that is preserved in our minds, souls and textbooks, often under the heading of patriotism. Which often manifests in the form of blaming the other. Her work Blame (2002), aptly describes this situation. In this interactive installation and performance, the artist distributes bottles with the labels of blame (with the inscriptions such as “BLAMING YOU MAKES ME FEEL SO GOOD. So I Blame You for What You cannot Control. YOUR RELIGION, YOUR NATIONALITY. I WANT TO BLAME YOU. IT MAKES ME FEEL GOOD”) in the local trains of Mumbai and at other public spaces, such as shopping malls, etc. The artist’s decision to move inside the public domain can be seen an effort to bridge the gap between high art and popular sphere as well as an attempt to shed the notions of authenticity and originality in the act of art making. Her bottles, made in a factory and labelled mechanically, bear only one signature of the artist – her idea; which is connected to the piece – but not contained or confined in it.

Shilpa Gupta’s surge to move beyond borders – of all sorts, manifested in her project ‘Aar Paar’ (2002-2006). In this public art exchange programme, artists from India and Pakistan were invited to make works, which can be easily transported – like the video dramas of Pakistani TV, CDs of Lata Mangeshker and DVDs of Bollywood cinema – from one country to the other. Artists from the two countries responded to it and made works in the form of posters, which dealt with the idea of unity and separation of two neighbouring nations of the South Asia. The work, transmitted through computers and internet from one country, was printed in other destiny to be shown in the public place. Even though this idea and project was conceived on the theme of public art, but along with it having an effect on public’s imagination or perception of the ‘Other’, it provided an occasion for the artists from the two sides to come closer and share common interests, ideologies and imagery.

The ‘Other’ artist/organizer in Aar Paar was Huma Mulji, the friend who suggested that I should go and see the work of Shilpa Gupta, a process that began in that summer day in Mumbai and still continues at various biennales, triennials, Tate Modern, Serpentine Gallery, Guggenheim along with many museums around the world, since her art also does not recognize limitations or lines of borders, may they be political, formal or personal.

Quddus Mirza is Editor of ArtNow.