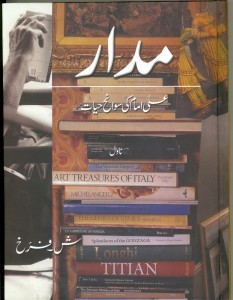 Madaar took me to different worlds, constructed with words which are around us, yet which we often neglect them. Use of Urdu to describe an event or personality of art is a rare activity and exercise; but in this case the choice of words, sentences and paragraphs and the way author expressed every single thing influence a reader, despite the fact if he is engaged with art or not. This is a novel which narrates the life of Ali Imam, the grand old man of Pakistani art. From his contribution as the Principal of Central Institute of Arts and Crafts in Karachi to his participation in the Lahore school of artists, Ali Imam has been a significant figure of Pakistani art, serving it through his Indus Gallery till his last breath.

The language of the book is very fluent, accessible and engaging. Sheen Farukh maps the journey of Imam’s life in a brilliant manner, taking into minor details from his ancestors’ environment to his lonely days in London, his engagement in Karachi art scene and his interactions with his contemporaries. Not only does the book inform us about Imam but provides a lot of information about art, the art schools of the sub-continent, its famous teachers, the way people used to live and practice art at the time of Indo-Pak partition. Sheen Farrukh writes as if we are spending time with Imam in real life, or as if the painter has come to life. The life of a real person is reconstructed in a way that he becomes a mythological figure, a combination of actuality and imagination. Ali Imam’s character is created or resurrected in such a scheme that his personality appears larger then life. But perhaps Ali Imam was a person like that, as no one can match his contributions to Pakistani art. Although he did not influence others through his paintings, it was his critical eye and sense of judgment that played an important part in the development of art in Pakistan.

Throughout his life Ali Imam was surrounded by people of all sorts, including painters, collectors, writers, intellectuals and students, but with each person he was as cordial and open as he was with his close friends and companions. This aspect of his life is described in the book, as the last part is comprised of lives and anecdotes of artists who were his contemporaries, colleagues and friends.

The book, written in the form of a novel, recreates the story and life of Ali Imam, and it seems that the author has spent considerable time interviewing Imam in order to know every possible detail of his life. This book is different from other biographies, which tend to be accurate but boring to some extent. Opening lines of this book are very interesting, as the author explained Imam’s family life and his love for art and difficulties in getting education and switching his field from science to art – all amazingly. She gave every detail of his friends and family and his love relationships. She told that Ali Imam was a hard working and unique individual among other artists of his time. His life spent in England is illustrated in a fabulous manner, so we know that we are reading about one of the important artists of our times, yet we feel that it is about a fictional character.

This blend of reality and imagination is an element that distinguishes Madaar from other such books, in which one often gets an exhausting account of a person. However may be because of exciting life of Ali Imam or unusual writing style of Sheen Farukh, Madaar is an incredibly interesting and readable text.

Sheen Farukh is a highly experienced and hard working author, as she created her fiction, mostly on the basis of her research from her interviews with the painter, his friends, press clips and mostly from Marjorie Husain’s monograph on Ali Imam (printed by FOMMA).

Madaar, published by Sang-e-Meel Publications, Lahore is an important document in knowledge of the art of Pakistan, besides being a significant addition to writing on art in Urdu. Because of its originality and informative approach the book is valuable not just to artists and art students, but to general readers too, who can enter the world of art through the words of Sheen Farrukh.

Madaar by Sheen Farukh is published by Sang-e-Meel Publications, 2015.

One Response to Book Review | Madaar Lives of an Artist