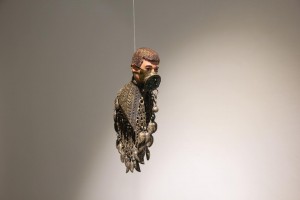 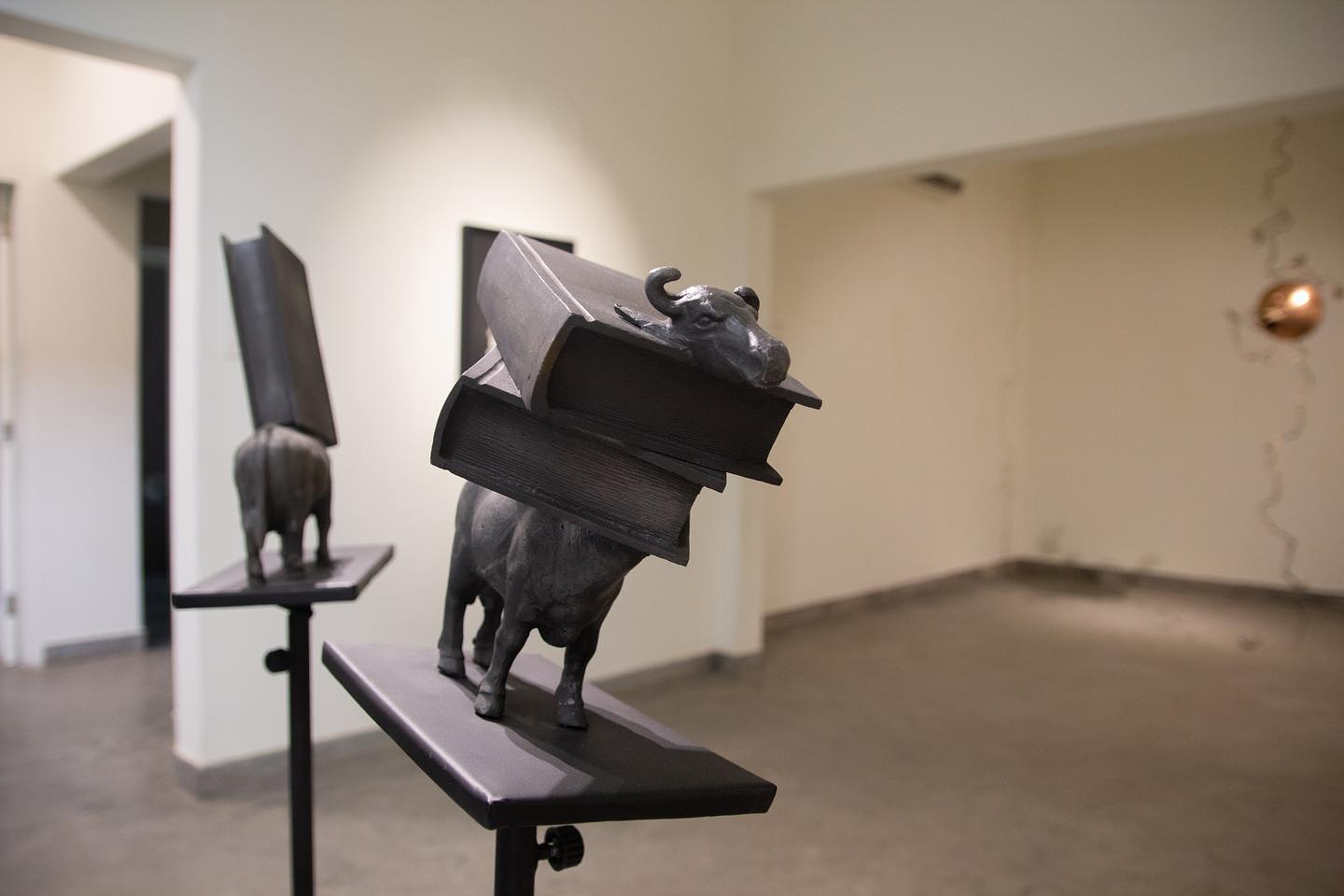 “Copper, Steel, Iron, Silver, 1080 – 666” opened on Tuesday 13 July 2021 at Koel Gallery and continued to run till 28 July 2021. What first grasped my attention were the digits 1080 and 666 and led me to discover John Michell, the English natural philosopher, and clergyman of the 17th century. John is a pioneering astronomer, geologist, and cosmologist. Considered ‘one of the greatest unsung scientists of all time’, Michell was the first person known to have proposed the existence of black holes and explained how to manufacture an artificial magnet. Ahead of his times, the extract from his writing included in the catalog of the show started to make sense of the digits. “The water beneath the Temple was both actual and metaphorical, existing as springs and streams, as a spiritual energy, and as a symbol of the receptive or lunar aspect of nature. The meaning of that principle is too wide and elusive for it to be given anyone’s name, so in the terminology of ancient science, it was given a number, 1,080. Its polar opposite, the positive, solar force in the universe, was also referred to as a number 666,” he wrote.

As the world grapples to come to terms with the post-pandemic era, it made for a perfect occasion to introspect and discover within the lives we lived in primeval times, the objectives we cherished in another era, the fantasies we craved when we were someone else, and the beliefs about immortality that we held. The artists who displayed their work and captured the reverberations of times gone by included Affan Bhagpati, Andre C. Meyerhans & Arshad Faruqui, Fahim Rao, Zohra Rahman, Munawar Ali Syed, Noor Ali Chagani, Nurayah Sheikh Nabi, and last but not the least Meher Afroz.

Affan Baghpati’s begins his creative process with collecting discarded objects once functional but now found idly at various avenues. These domestic objects have long lost their presence, function, and respective maneuvers. He deconstructs forms, redesigns motives, and creates new hybrid objects with notional functionality. In his own words, “These hybrid objects…. also engage the viewer with their aesthetic sensibilities that are no more practiced in this age. Through this work I aim to probe deeper into the biography of objects, to investigate how things were made, bought, used, consumed, given away, collected, sold, and bought again.” His Lullaby 2020, an assemblage of a headless taxidermy rooster, a brass huqqa, and a polymer vinyl head of a doll deep in slumber commanded an almost ironic iconographic respect despite being an object of waste.

Arshad Faruqui and André C. Meyerhans are both architects. While Faruqui has been reviving the crafts of copper and works with local craftsmen to incorporate it in his tableware, fountains, and furniture designs, Meyerhans has been recognized as one of the forty most influential architects of the region in 2015, 2016, and 2017 by the Middle East Architects Magazine. Talking about their collaboration to create a collection of copper pieces they said, “What would embrace today’s Zeitgeist the best? Without a piece of scientific evidence, ‘remote’ seems to be this word…. And so, two architects, designers, and friends embarked on an experiment of ‘remote design’.”

Fahim Rao, a Pakistan sculptor, and educator is known to work with various mediums and materials ranging from clay and wood to metal and fiberglass. Rao draws from his memory and experiences and focuses on the anxieties, struggles, and joy of living in a metropolis. He carves, assembles, and welds to create forms that tell lawlessness, inequality, unaccountability, and injustice. His single display, an angular doodle crept over the wall at the show, titled, ‘Drawing not allowed’. Explaining this Rao shared, “I remember I was in my fifth grade. My teacher did not allow me to draw on my copies and here I am still drawing lines.” This unabashed urge to express his innate child-like bewilderment at the universe is what perhaps also once motivated the non-figurative cave art in the Iberian Peninsula.

Munawar Ali Syed’s work at the show was most fascinating. Syed is a Hyderabad-born artist and art educator. Syed’s artworks have been shown in seven solo exhibitions and numerous national and international group exhibitions including Karachi Biennial 2019. He also collaborated with local Pakistani artists and craftsmen such as truck artists and produced several public artworks as accessible public art initiatives. His three pieces of the ‘Black in black’ series, cast in aluminum and metal stand, were stunningly poignant. Metallic bulls held metallic books on their heads and shoulders and reminded one of the cosmic bull of Kujata. Syed said about his art, “Art is the mirror of my creative vision, an abstract object of my desires, and a manifestation of my existence. I seek to transcend the traditional dichotomies such as structure from the agency, high from the low, concepts from value and sacred from profane.”

Noor Ali Chagani had an intriguing, Untitled (Together), 2021 concrete and iron rods, the piece on display as part of the show. Chagani has exhibited in solo and group exhibitions in notable institutions around the world. Chagani has been a part of several fairs and biennials such as Venice Biennial, India Art Fair, Moscow International Biennale for Young Arts, Art Basel Hong Kong, Slick Art Fair Paris, and Art Dubai in 2017, 2015, 2011, and 2010. He has been awarded Residencies in Rijks Academy, the Netherlands in 2012, Riwaq Art Space Residency, Bahrain in 2013, and the Jameel Prize Residency, Victoria and Albert Museum, UK in 2016. Recently Chagani has been featured in Modern Painters Magazine NY in ‘Top Emerging Artists to Watch in 2018’.

Nurayah Sheikh Nabi’s single entry in the show was also very captivating. Having investigated and worked with multiple mediums, printmaking remains Sheikh’s forte. Her visual practice is an intensive study of material and technique through critical research and documentation that has deeply informed her pedagogy. Sheikh explores the timeless transference of complex relationships linked to the female in the ageless avatars she adorns. Currently, Sheikh is an Associate Professor at IVS, where she has taught since 2005. Her ‘Dragon dance’, a repositioning in dispersal, 2021, is an installation in brass and copper variable – stem 10 feet in height and 12 inches in the sphere is ethereal and evocative.

Zohra Rahman studied jewelry design at London’s Central St. Martin’s before returning to her hometown for the launch of her eponymous jewelry label in 2014. The Zohra Rahman workshop is sustainable and ethical in its ethos. Reinterpreting age-old concepts of apprenticeship, each artisan is individually trained in the intricacies of jewelry making by the designer herself, spreading specialized skills to the local community. Every apprentice holds the capacity to become an innovative master. Widely credited as a pioneer of contemporary luxury jewelry in Pakistan, Zohra has been recognized by numerous prestigious publications, including Vanity Fair, Vogue, and Wallpaper Magazine. For the show, Zohra Rahman designed a set of concept objects, drawing inspiration from the urban visual aesthetic and the ubiquitous symbols of the Islamic faith. The processes of traditional jewelry-making were used to create precious usable sculptures, designed and handcrafted at the ZR workshop by the artist and the team.

Meher Afroz needs no introduction. She graduated with Honors in Fine Arts from Government College of Arts and Crafts, Lucknow, India, in 1971. She has taught as a professor at Indus Valley School of Art and Architecture, Karachi, and is a member of Pakistan Arts Council, Karachi. Afroz’s work has been featured in notable publications, 50 years of Visual Arts in Pakistan 1997 by Prof. Quddus Mirza, Pioneering Perspective 1998 by Nilofer Farrukh, and Image and Identity 1999 by Dr. Akbar Naqvi. She has been showing her works in several solo and group exhibitions in Pakistan, UK, Sri Lanka, Canada, Iraq, India, Hong Kong, UAE, France, Nepal, USA, Bangladesh, Australia, and Italy. Meher Afroz is the recipient of numerous awards including the Pride of Performance Award by the Government of Pakistan in 2014, and

Honorable Mention at the 6th Asian Biennale in 1993, Bangladesh. Her mesmerizing ‘Nuqra-e-Tabnaak’, 2021, Silver leaf, stitching, acrylic on vasli, was a 10 x 13 inches piece at the exhibition. According to her, “As silver does, even the most eloquently-worded, beautiful passages lose their luster over time,” and Nuqra-e-Tabnaak signifies exactly that; a transitional nature of the most scared of the emblems and icons.

The art on display at ‘Copper, Steel, Iron, Silver, 1080 – 666’ definitely echoed of space beyond the realm of this globe – it echoes of metallurgy, alchemy, and mythology that is outside mortality but has faded away from human consciousness. It resonates with experiences and objects that we humans may have held consecrated, perhaps before this physical existence – they appeared familiar and yet outwardly. Reminiscent of the times of afore the industrial age. They spoke of the past lives that we may have lived centuries ago, through the times of our forefathers