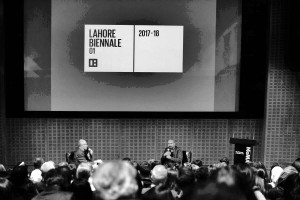 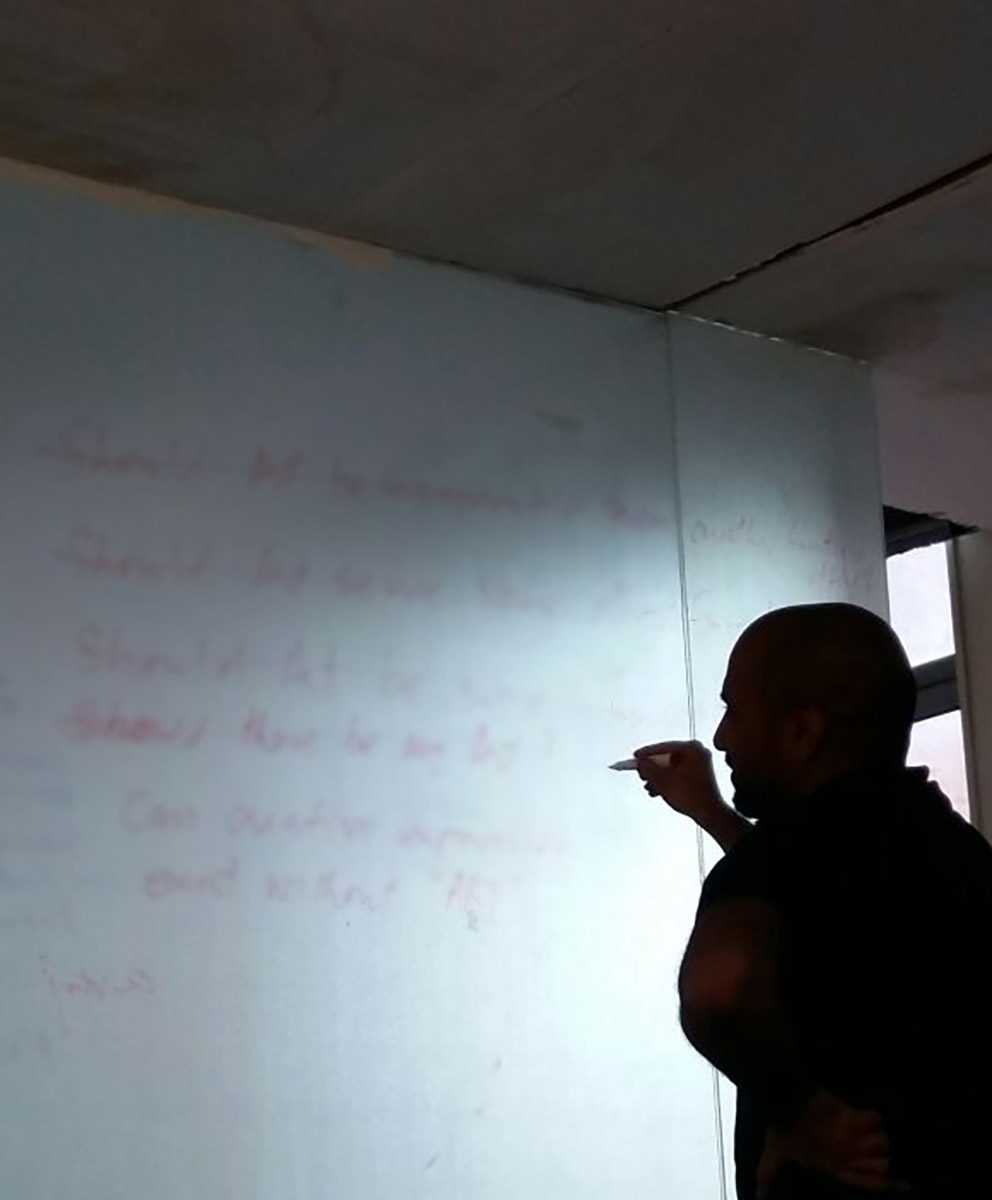 There is no End | In conversation with Rashid Rana on #LahoreBiennale01

The greatest challenge in art today is not novelty rather contextualizing of expression. Defying the two fold binary present in the nature vs. culture discourse, where artistic practice explores either to serve as mimesis or self exploration, one observes a polarity developing in the world of high art today. This polarity is innately instigated by defying navel-gazing,and exploring thematically and formally practices beyond ‘objects’,curating environments, gallery kinetic objects, outdoor installations, happenings, and other multi media exhibits. The evolution in the art world is surely in a flux and presently it is in deterministic to provide a context or theory to this, albeit it is a major paradigm shift.

“We are now in a transition from an object oriented to a system oriented culture. Here change emanates, not from things, but from the way things are done.” – Jack Burnham

Where one observes biennales, fairs, triennials, and documentas sprouting like wild mushrooms, one finds it’s quite crucial to cap the thematic and contextual questions being raised by each individually.

The inaugural Lahore Biennale with the Artistic Director Rashid Rana at the helm introduces a multi-layered complex proposition. Rana brings into the curatorial process an artistic oeuvre and academic sensibility that incubate deep thought and reasoning. After a long conversation with Rana, while also being part of diverse discussions around the Lb01, I realize that the Lahore Biennale 01 (LB01) deems to not only serve as instrument to hosting the international art connoisseurs, this unique vision is a three-fold endeavor, raising thematic, formal as well as contextual questions about the role of art and creative expression.

Our current reality is closely configured by institutions, forms of making, and system of knowing of which art and aesthetics plays a critical role. The curatorial vision of LB01 comes directly at par with art/life debate, posing pertinent questions and deeming skeptical about the predefined roles of art, artist, audience and beyond. One may wonder whether such skepticism stemming from LB01 vision is infiltrating from Cartesian doubt or Danto’s “End of Art Theory” predicament, however when digging deeper, LB01 moves beyond institutional critique and introduces a vision that broadens the way of expression that are harmonious to life and vice e versa.

This unique vision of Rana stemming from a philosophe-artistic bearing makes me wonder whether the role of a curator is being redefined and whether this ambitious project will inform the role of art making and art curating in the region in the future.
NJ: I would like to ask you firstly, the term that caught my attention; Lahore Biennale 01 aims to create a biennale ‘without walls’. The term with its impact claims to rethink the biennale formats. Is this a rhetorical statement or are you planning to cross all limits and confines to art making and exhibiting?

RR: With the inaugural Lahore Biennale, it is only natural and perhaps even necessary to reflect on the ways in which the format may be used anew in a distinct and meaningful way. This distinction, while informed by the context of the location, is not restricted within it. The first Lahore Biennale sets out to challenge the parameters of both the format and the discipline of art itself. It seeks to imagine possible futures and potentials in subversive and yet, expansive ways.
LB01 is inviting the participants to engage with the city of Lahore as a mere point of departure. Lahore surely will serve as a site of exhibit, but it would be interesting to see whether the LB01 vision invites the artists to converse with the city beyond its location, and engage with possible underlying multi-layered networks and systems of the city that allow them to re-examine the context of the city.

NJ: In your introduction you state, ‘It is my desire that we create something, which generates ideas for the larger discourse in art world and yet remains relevant to a large number of audiences from Lahore.’ Are you aiming for the biennale to serve as an institutional critique to art making today?

RR: The first LB hopes to directly engage with the inhabitants of Lahore to whom the sensory experience of the event will be most accessible. By attempting to engage residents of the city directly, LB01 hopes to create a network of art projects where participation and autonomy diffused, thus creating a horizontally rather than a vertically structured system.
Naturally, this emphasis does not bar an international or dislocated audience from experiencing the event on its own terms. It is also acknowledged that for many, direct and indirect experience may even overlap. Particularly, the ideas that we are working with, involving challenges to the biennale format and the discipline of art, are more broadly applicable. Such investigations transcend the idea of location since they hope to generate a wider discourse in the art-world at large. This allows the LB01 to operate with an informed but unfixed view of its geographic location.

NJ: In your talk at the LB introductory seminar last month you mentioned “LB01 aims to go ‘beyond public art’”. Public art over the years has increasingly gained visibility, where you see huge sculptural installations like “Bean” by Anish Kapoor that serve as touristic spectacle or public projects like “Gramsci Monument” by Thomas Hirshhorn that tap into social interventions. How will LB01 re-contextualize public art and take it beyond?

RR: On one hand, we hope to expand the production and viewership of art beyond conventional spaces, but hope to do so in many diverse ways. We hope to overturn expectations surrounding both art practice and exhibition making. A public art project can either serve as a static spectacle or stimulate a dynamic system of engagement and participation with the environment, such as in the case of relational aesthetics. In both cases the audience is a key component to the work.
Barring from the context of the gallery space, where the audience is expected to practice a ritualistic exercise of visiting the gallery to experience the art, LB01 questions all relevant ideas/mannerisms. Therefore I am interested in exploring the idea that goes beyond “Public Art”; the city serves not just as a site but also as the medium, probing various functions of life through art. We aim to invigorate and facilitate artistic interventions in the city using various fabrics of the city as a medium, and to plug their projects into the city while activating any function of life. These projects will stipulate a transaction among the various networks and systems of the city that may be tangible or intangible and in turn moving beyond the public art, as we know it.

NJ: What kind of practices and mediums are you looking at to be included in the biennale?

RR: LB01 aims to actively question the role of art/artist and art practice, it serves to connect not only the local with the international, but also provide a nexus between disciplines like the humanities, sciences and the arts. Creative expression does not exist in isolation. Today ‘Art’, its realization, autonomy as well as reception are informed by various contexts. With the advent of new millennium, art has fused into science, technology, culinary, biology, engineering and many more. Surely there is a linear progression that the most talked about phenomena of ‘global village’ directly informs. Art has even found a way into our rhetoric and colloquial ways of conversation and everyday being.
Artists and thinkers have tried to question the role of art and life in the past; where one sees the Duchampian criticism on the boundaries sketched out between everyday life and art, while one also sees Warholesque thematic sensibilities exhilarated by replication of the everyday in art. It is pertinent to imagine that we are entering into a new way of engaging with the world around us. The role of art is actively being questioned and intentionally broadened, where we come at par with every section of life, where art doesn’t become life, in fact life becomes art.
Lahore Biennale 01 hopes to explore the intersection of art and its social context by inciting dialogue amongst practitioners, academics and thinkers from diverse disciplines, and through new commissions from some of the world’s most engaging artists, both established and emerging. We are surely in a lookout for creative practitioners, from fields within arts and beyond.

While one may critique that this is pertinently a western model of thinking, and furthermore dissect whether it can quite directly if not apply, but impact the South Asian sensibility towards creative expression, I found it crucial to ask Rana ways LB01 is addressing or rather raising questions around contextual and exotic reduction of art from this region.

NJ: Pakistan due to its strategic location, rich cultural history and political positioning is ceaselessly eroticized and perceived with certain orientalist viewpoint. LB01 aims to invite the international onlookers; artists and audience to not gravitate towards Lahore as a theme, rather use the city as a point of departure. Is this possible? How do you aim to achieve this?

RR: Lahore at present is complicated but the world has a very limited view of it.
Its non-linear sense of time and peculiar circumstances enable multiple contexts, providing a fertile environment that has produced many creative individuals who have made their mark felt across the world. Lahore deserves an art/cultural event of the scale and the ambition of a biennale. Admittedly, the task we face is an intimidating one, posing its own particular set of challenges both ideological and practical. This is also what makes the project so immeasurably exciting. As an artist as well as a curator, I welcome the hybridity of creative possibilities.

Art operates by moving amidst binaries, boundaries and any other extrapolated dualities, existing in the in-between. While at the core of the LB01 lies questioning, rethinking and reinventing the formal and contextual understanding of creative expression, I sit here wondering of all the possibilities and relevant questions that it sparks around the art discourse in the future. The biennale aims to engage with the systems, networks, and transactions of the city installing in play organized creative structures that continue to engage with the city ad infinitum, becoming a part of the city giving birth to new systems, and existing beyond an end.