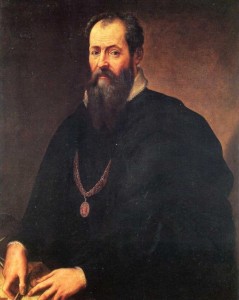 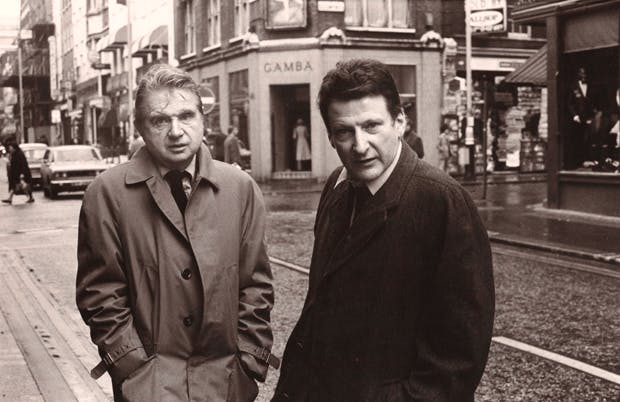 “Masaccio’s origins are to be found in Castello San Giovanni di Valdarno where, people claim, some figures painted by him in his early childhood are still to be seen. He was very absent-minded and unpredictable, like a man who has devoted his whole life and will only to the details of art, caring very little about himself and even less about others. And because he never wanted to think in any way about worldly affairs or concerns, not even about how he dressed himself, he was unaccustomed to collecting anything from his debtors unless he was in dire straits. Instead of Tommaso, which was his real name, everyone called him Masaccio*. This was not because he was a bad man, for he embodied goodness itself, but rather because of his complete lack of concern.”

(*Masaccio might be translated as ‘sloppy Thomas’, ‘Thomas the mess’, or ‘bad Thomas’.)

What, or who, brought out artists from the shadows of grouped anonymity and pointed out their names, features, and personality traits to the world? Up until a certain point in history, artists were indistinguishable not only from each other but also from their creations. The concept of the artist as an individual was concurrent with humankind’s emergence from the middle ages into an epoch, purportedly, of truth and enlightenment, at the heart of which was a championing of humanism, an enshrinement of the individual as a creator and the creator as an individual. In this context, Giorgio Vasari’s The Lives of the Most Excellent Painters, Sculptors and Architects was both opportune and inevitable. For the first time, a biography of the artist was offered up for readership. Published in 1550, the text chronicled the lives and works of the luminaries of the Italian Renaissance (many of them now household names), from Cimabue to Michelangelo. No longer simply pairs of nimble and nameless hands, toiling pell-mell on a painting in an atelier, artists were presented (and so began to be perceived) as individuals with distinct familial and educational backgrounds, temperaments, and even physical constitutions that all contributed to what they made and how they made it.

Vasari’s Lives, in many ways, prefigures modern biographical writing. The biographies recount not just the breakthroughs and accomplishments of the featured artists but are also replete with anecdotes about their personal lives (many from dubious or unspecified sources), narrated with the relish of a gossip columnist.

Lives can also be said to have birthed the cult of personality in the arts. The myth of the artist, of the doomed or tormented genius would never have taken root in popular, and timeless, imagination if no one had thought, first, to separate one doomed genius from the other. Indeed, if one thinks about it, much of our current preoccupation with the personal lives of artists owes itself to Vasari painting Giotto out to be a child prodigy and Fra Filippo Lippi a womaniser of prodigious talent and Leonardo da Vinci a mercurial, easily bored pupil. We have come to expect artists’ lives to provide answers to and commentaries on their oeuvres – or, at any rate, to entertain us. Da Vinci’s inability to finish things he started has, for instance, contributed as much to his infamy as the Mona Lisa has to his fame. His distractibility informs studies of his work, prompting researchers and admirers to muse on the not uncommon relationship between heightened inquisitiveness and marked impatience.

Consequently, now, when Anish Kapoor (in the kind of megalomaniacal move many have come to associate with the extremely rich and famous) secures exclusive rights to the artistic use of Vantablack, it is both news and not news. It is news because the artist wishes it to be news, he makes sure it is news – he ruffles feathers, scorns decorum, spurns tradition. He could have chosen not to obtain copyrights for a new synthetic material just because he could. But he did, and this is also why it is not news – we have come to expect artists to behave a certain way. Their lives fascinate us. They are relatable and human, perhaps too human, embodying, like many of the Greek or Roman gods and goddesses, those aspects of human nature that are unruly and intemperate.

“The man who should have tried his best to increase [Piero della Francesca’s] glory and reputation (since he learned everything he knew from him), instead wickedly and maliciously sought to remove his teacher Piero’s name and to usurp for himself the honour due to Piero alone by publishing under his own name – that is, Fra Luca del Borgo – all the efforts of that good old man who, besides excelling in the sciences mentioned above [arithmetic and geometry], also excelled in painting.”

There is a cartoon made for New Scientist by Scottish cartoonist and illustrator Tom Gauld, titled THE GREAT SCIENTIST’S PAPERS HAVE BEEN DIGITISED AND PUT ONLINE. It shows a computer screen with two columns of folders on it labelled: Published Papers, Research, Correspondence, Disputes, Slights, Snubs, Spats, Quarrels, Grudges, Slander, Libel, Threats, Feuds, Vendettas. One can easily replace THE GREAT SCIENTIST with THE GREAT ARTIST and PUBLISHED PAPERS with PORTFOLIO and essentially have the same thing: a creative life characterised and fuelled by competitiveness, pettiness, envy and egotism.

In recent years, a lot has been written about famous artist rivalries (interestingly, Vasari, in his Lives, touches upon the importance of rivalry among gifted contemporaries and its positive effect on their collective output). Artist rivalries are a crucial example of how the professional and public worlds can have a bearing upon the private, interior worlds of artists. Or perhaps they raise the question – what if these two worlds are not exclusive at all?

In The Art of Rivalry: Four Friendships, Betrayals, and Breakthroughs in Modern Art, Sebastian Smee examines four famous rivalries in art history by seeing rivalry not just as “the macho cliché of sworn enemies, bitter competitors, and stubborn grudge-holders slugging it out for artistic and worldly supremacy” but as a kind of “yielding, intimacy, and openness to influence…[a] susceptibility.” What results is a deeply nuanced study of the private worlds of different artists colliding and conflating, and of these collisions and conflations shaping the wider art world. Smee narrates, for example, how Lucian Freud sought long and hard for his portrait of friend and rival Francis Bacon that was stolen in 1988 from the Neue Nationalgalerie in Berlin, years after the two had fallen out. Similarly, upon Edgar Degas’ death in 1917, a small collection of friend, peer, and rival Edouard Manet’s works was found tucked away in his studio.

Then, of course, there is the art itself – the art predating these artists’ often fraught relationships with each other and the art produced afterwards. Smee is vivid and poetic in describing the art and the changes it underwent as a result of the “slippery psychodynamics” of these delicate friendships. He observes, for instance, that Freud’s drawings, pre-Bacon, “were cramped, fanciful, childish, their pressurised lines criss-crossing the page like cracks in thin ice.” His paintings, after getting to know, admire, possibly resent, the older painter, began to show “unflinching realism, prolonged scrutiny, a beady-eyed focus on humid, blotched skin and sagging flesh…” His work became “raw and rash-ridden. Sweaty. You could almost smell it.”

“It is said [Fra Filippo Lippi] was so lustful that whenever he saw women who pleased him, he would give them all his possessions just to have them, and if he could not, as a middle course, he cooled the flames of his amorous passion by talking to himself while painting their portraits. He was so obsessed by this appetite that when he was in such a libidinous humour he paid little or no attention to the projects he had undertaken. On one such occasion, Cosimo de’ Medici, having commissioned him to do a work in his home, locked him inside so that he would not leave the house and waste time, but one evening after Filippo had remained there for two days, he was driven by his amorous – or rather, his bestial desires – to cut up some sheets from his bed into strips with a pair of scissors, and, once he had lowered himself out of a window, he pursued his pleasures for many days.”

Over the years, our keen appetite for artist biographies and life stories has also led to an interest in the lives of those who, for the longest time, were treated or dismissed as peripheral figures but are now regarded as central and seminal, those who lived with (and frequently suffered at the hands of) artists. In today’s compensatory socio-cultural climate, the lives that intersected with the lives of artists of renown – wives, “muses”, lovers, lesser-known friends, patrons, invisible champions – are being revisited, and artists themselves are being reappraised in light of their entanglements in these other lives. Artists like Pablo Picasso, for instance, are no longer completely separated from their deplorable conducts towards the people in their lives (women, for the large part). The concept of the faultless and irreproachable genius weakens under the ironic, quizzical, postmodern gaze, as does the practice of isolating the artist with a spotlight on a tenebrous stage, of viewing the artist through a peephole in his studio door, hard at work in the only world he is believed to inhabit. Identities are no longer different sets of clothing to be donned for different sets of tasks. They can and do conflate, leading to more wholesome experiences of individuality. Just last year, a number of women artists defiantly responded to Marina Abramović’s pronouncement that having children endangers a woman’s artistic potential. Kara Walker countered by saying that she had her daughter the same year that she received the MacArthur “Genius” Fellowship – “What can I say, I wanted a child and a career and I didn’t feel one took energy from the other.”

Vasari, Giorgio. The Lives of the Most Excellent Painters, Sculptors and Architects (translated by Julia Conaway Bondanella and Peter Bondanella). Oxford University Press, 2008.