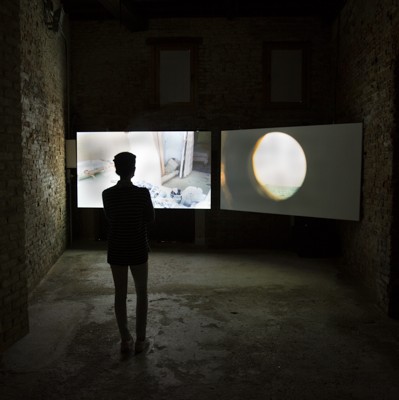 The Ghosts of Past and Future: Pakistan in Venice

Pakistan Pavilion marked its debut at the 58th edition of the Venice Biennale with Manora: Field Notes, a solo presentation by multi-disciplinarian artist Naiza Khan. The exhibition, which will run till November 24, has been curated by Zahra Khan and presented jointly as a public-private partnership between the Pakistan National Council of the Arts and Foundation Art Divvy.
Naiza Khan’s oeuvre spreads across three decades and expands beyond a rigorous studio practice of drawing, painting, printmaking and sculpture, to encompass performativity in the public sphere in the form of film, sound and in-situ installations. In charting a trajectory through her works, one can observe a natural progression in the mapping of contested/controlled bodies, as the subject matter moved from women to land. Hers is a feminist historicisation of the urban age of Karachi, narrated through experiential cartography, and it is from here that the interest in Manora took root.

Despite what the title alludes to, Manora: Field Notes is not an overview of Khan’s research or notation of her past projects. It, instead, comprises almost entirely of new works that depict existing with the idea of what Manora represents – a peninsula (interchangeably identified as an island) layered with the ghosts of the past and the future – specifically within the dialectics of Khan’s world. Manora’s own physicality, replete with multi-religious and ethnic histories and current-day land politics, becomes a microcosm of the Greater India that a small 19th century weather observatory was built on it to observe.

The backbone of the exhibition emerges in the strategic decision that the curator and artist took when they selected the venue that they did. The pavilion’s proximity to the Arsenale must be costly (it is a stroll down the entrance queue and a hop across a small, bridged crossing) but it is in its scale, layout and intimacy that the works find triumph. The exhibition is laid out across two rooms and a courtyard in-between, and both the curator and artist emphasise that these three spaces played a large part in developing the final format of the installation and the sensorial dialogue that emerges from it.

The division between the spaces, demarcated by one’s position inside or outside the rooms, greeted either by darkness or a watery sunshine, seems to also mark the temporal tonality of the exhibition. Upon entering the unassuming entrance, the exhibition swallows one into the dark womb of the narrative. Deep blue paint covers the walls and the asymmetrical plinths that jut out like small islands covering most of the floor space. Even before the eyes adjust to the solemnly glowing brass sculptures of Hundreds of Birds Killed, resting upon the plinths or suspended from the roof, the disembodied voice of a woman finds you. Those familiar with The Observatory, a 2012 film Khan shot in Manora, immediately recognise the reading of excerpts from the 1939 weather report that the artist salvaged from the ruins of the British-built weather observatory on the island.

The new sound piece, commissioned for the pavilion, is a cover to cover reading of the entire 1939 India Weather Review which reports storms, and the destruction left in their aftermath, across British India. The narrator Nimra Bucha, who also lent her voice to The Observatory, has imbued the reading with dramatic inflections of empathy, while London based sound artist Oriol Campi has engineered modulations and augmented it with ambient weather sounds, like rain and hail. The dossier itself, rescued from under the collapsed roof of the observatory, is installed in a far corner of the room and surreptitiously looks down upon the manifestation of hundreds of stories of weather anomalies that flattened crops and huts and displaced humans and cattle alike – to me, mimicking an account of how the British Empire weathered upon colonised lands.

The brass sculptures represent eleven cities (Lahore, Mymensignh, Amritsar, Jamalpur, Kolkata, Faisalabad, Motihari, Siliguri, Sukkur, Chittagong and Jhansi), selected from the reports in the journal, have been produced through a laborious process involving digital cartography of current-day maps, followed by brass casting in Golimar, Karachi. It is ironic that these cities, that once told the story of undivided India, are now part of three different nations, metamorphosing their geographies to the needs of their own socio-political narratives. Scattered around the maps are miniature casts of the debris of the storms – cattle, planes, birds, trees. Interspersed are the miniature whale sharks that have become a recurring motif in Khan’s visuals – referring not only to a specific 2012 event of a beached whale shark in Karachi but also to the Sindhi lore of ‘Moriro and the Whale’ (Moriro ain Mangermachh) which is echoed in the teachings of the Sufi mystic Shah Abdul Latif Bhittai, and therefore marks the spiritual coastline of Karachi. Khan explains that for her the shark becomes a metaphor for the city of Karachi, “a non-human organism with its guts spewing,” symbolising the way the city has been treated and unloved. Through this gentle prodding of the open wound of Karachi, the installation wears an intimacy of sorrow.

As one is about the exit the room, a portfolio of watercolours silently nods you through the door. The Cast of a City drawings are the only works in the Pavilion that are not new; their inclusion is significant yet understated. Made in 2015, as a response to the artist’s own video work created for a public project by the Tentative Collective, the images mark the sound spillage as an alternative mapping of the urbanscape of Golimar. For Khan, the idea of casting a city found its first home in these drawings, a theme repeated in the plinths which are designed along these maps.

Where the first room seemed to be encased in the solidity of archival, museum-esque memory making, the courtyard brings a disruption that is completely personal. In the centre stands Doorbeen, a steel telescope lifted off the coast of Karachi to become a worm hole connecting the beach to this little, enclosed brick space in Venice. Not unlike the accidental portal from Being John Malkovich, the telescope transposes the viewer inside the head of Khan, becoming her eyes as she walks down the beach. When I saw the exhibition, the telescope had been moved inside and positioned by the window, to protect it from the incessant Venice downpour. It worked well for me, this placement, of looking out from within; of a literal window into another world. For this temporary configuration, the courtyard became a space to pause and reflect. A table in the corner was piled with books and catalogues of Khan’s as well as a guide map of the brass cast cities inside. The table broke the reverie of the first room: at first welcome, but on later consideration, more jarring than it should have been, and proving limited use of the space. Had the Doorbeen been in its original place when I went, perhaps the experience would have been different for me.

Leaving the bright outdoor space, a small door invites the viewer back into another dark room – this time a longer space with four large, suspended screens. Sticky Rice and Other Stories is a four-channel film installation, which is set up in two sets that each carry independent narratives. The layout starts with a two-channel video that grazes over colonial and post-colonial histories of South Asian maritime conquests and trade through a micro-pocket of local artisans who fabricate and sell handmade souvenir boats on the coastline. The footage, which has been shot over several years, weaves in additional interviews with scholars Iftikhar Dadi and Arif Hasan, and the dialogue moves between informal chatter to historical accounts of the systematic destruction of local economies of production. The footage of one of the artisans pushing his cart on the beach in the evening, self-conscious of the camera, is a strangely endearing moment in the film, but one that also makes glaringly visible the rigid class divides across public spaces of leisure in Pakistan, and between the worlds of the viewer and the viewed.

The two-channel video at the further end grounds itself in a workshop setting in which another man cleans and assembles telescopes similar to Doorbeen while talking about the simultaneous histories of the parts that make the telescope, and the people that use them (or have stopped using them). In the conversations around smuggling and new technology, a very real glimpse is offered into the disintegrating small-scale industry in the face of changing times and globalisation. Through it all, the film navigates through the idea of the loss of wonderment in the age of racing ahead. Having said that, the video seemed long drawn at times and was not able to hold its own against the familiarity displayed in the first set before it.

While the presentation left me wanting more in content, certainly not in the number of works, both the Khans (and Manora) help bring a challenging and nuanced dialogue to the country’s first national pavilion. This is a feat in itself considering that temptation of making grandiose statements, fuelling fetishized perceptions of Pakistani art, and staking claim to nationalism (that often crops up at such platforms) were successfully avoided. The pavilion’s social media account seemed to proffer bites from a rich archive that one had hoped to encounter in the exhibit itself. However, the curator explains, that the scope of the research material and the artist’s expansive engagement with it will be properly represented and dissected in an upcoming reader, which includes texts by Emilia Terraciano, Aamir Mufti and Iftikhar Dadi and is due to be published in September of this year. It is indeed something to look forward to.