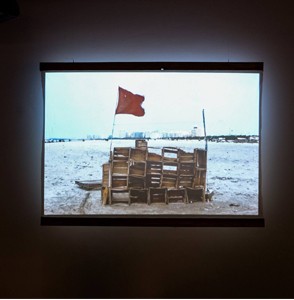 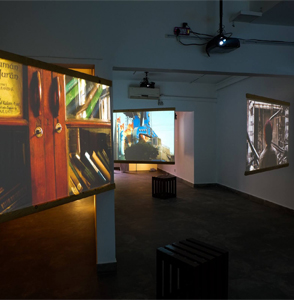 While the City Moves On

“Look at the city from here” is a series of three solo exhibitions which celebrates the Gandhara Art’s tenth anniversary; and nothing seems more befitting to mark this milestone than by paying an homage to the cities we are entirely beholden to for moulding our identity as individual citizens or even as a collected establishment. Yes, undeniably the city is equally reliant on its inhabitants for constructing its face as we are vice versa, and it is this reciprocity which forms the foundation for the project. Curated by Hajra Haider Karrar, the exhibitions capture the poetics of this relationship by displaying the artists’ distinct attempts at resurrecting the image of the city. They archive the evolution of the tangible – the ceaseless metamorphosis of the infrastructure and the ripples sent across the skyline for instance. And they also materialize the impalpable – the wavering social climate and the fluctuating moral compass in light of recent events. The artists discuss the empathetic memories as well as the history the city witnesses and imprints on itself with time and in doing so, encompass the long ago, the present, as well as the futuristic.

Bani Abidi is the second artist to showcase an extract from an expansive oeuvre as part of the series. Titled “The most amount of people standing still, screaming and laughing,” the exhibition is a retrospect over the past decade, inviting viewers to not just experience the trajectory in her career but also reminisce the city’s history which the artist recounts.

Prescribed throughout the gallery, the curation thoughtfully maps the body of work to navigate viewers within the space as they would within the city. Having been allowed to view the city in a way they would not get to otherwise, the audience visits recognizable locations, encounters interesting individuals and continually shifts across timelines. This in effect shadows the reality where one’s experience of the convulsing dynamics of our metropolis rarely recurs.

In Karachi Series II Abidi transports iconic landmarks to an anti utopian future. Withstanding time, the ghostly locations emanate an immense sense of melancholia. A solitary man seated towards the Arabian sea has turned his back to the city; perhaps given up or distracted from the strenuous environ, the individual attempts to forget the problems which engulf the megalopolis behind him. Another man stands in a burnt cinema and looks with despair at the devastation around. He contemplates how to rescue what is left. In another video a middle aged man empties shelves in a defunct library. Revealing no expressions of despondency despite having to shut down the space, he aimlessly stacks and packs an array of books in empty cartons. They are those who are trying to salvage the savage remains of a city that was extensively abused by most who then left it vacant in its misery. One of the reoccurring themes in Abidi’s practice is the class and sectarian division endemic in our society and how that effects an individual’s or a group’s ability to continue existing in a city that is constantly altered. Having bred an extremely fragmented and specialised culture we have further divided our supposed public spaces such as amusement parks, beaches and cinemas amongst themselves to cater each stratum.

A group of people is shown proceeding with mundane household activities on the roads in Karachi Series I. The domestic routines of these individuals percolate through the rigid membrane that segregates them from the public sphere. Set during the time of Iftar in Ramadan when the Muslims have all comfortably retired to their homes, the non Muslims finally get the opportunity to diffidently step out to experience the city with unrestrained freedom which ashamedly they rarely achieve. Abidi mitigates the modern fissure between the public and private lives as they openly iron clothes, laying defying claims to equal ownership of their city. Abidi further explores societal marginalisation in Looking out for the stars amongst the crescent as a round of Christmas celebrations in a local neighbourhood is conducted under heavy surveillance through several cctv cameras. The voyeuristic lens and the escalating sense of constraint is unnerving for viewers to bear; they share the disquietude with the marginalised communities shown in the video. Abidi creates a discourse on the exclusion of not just groups but also of neighbourhood streets which politicize and religionize a benign space.

In Flailing Barriers Abidi envisages a parallel existence where the superfluous barricades develop a life of their own. Servants to their own voice, these hurdles swing at will. Abidi offers a humorous perspective at a world where all the mechanics of the city lose control and rise in anarchy, causing mayhem amongst the sought semblance. But who is to say what we have now with the overbearing blockades around the city create any less of a chaos despite the intention behind of introducing order.

A misleading scenario is set in The Address as Abidi creates a setting used for televised presidential speeches which she originally played in public spaces in Lahore. Upon observing the empty seat the passers-by are caught deciphering whether the speech has yet to begin or has just concluded. The wait tests viewers’ patience and interest as few realize that from the flowers and portrait to the curtains and the flag, everything is a gimcrack imitation of the real. It compels one to question whether the video is actually a photograph. The artist shows concern for the enmeshed relationship between the civil society and the face changing state heads and the perpetual uncertainty we circle in as a result.

While the redolence of desolation imbues the ground floor and the works are discernibly void of active human interventions, the conglomeration on the first floor commemorates those who Abidi calls the ‘freaks’ of our country. The anomalous and the often misfits congregate for a jocular display. Disregarding the normal system, the eccentrics have nothing to lose or be answerable for. Abidi’s interest in the oddities and her extensive research on peculiar world records our country holds is apparent in the visuals. In a society where every day life and culture, and the historical events are dissociated – without losing their solidarity – Abidi pinpoints how the historical and the everyday come together as in her work the two coincide. By contriving narratives she displays the processes which escape immediate notice but are perceptible once they emerge in the consequence.

The ghost of Mohammad Bin Qasim highlights the absurdity behind the concocted reality which we gradually conceived high veneration for. The mounted figure is pasted in present-day settings; accentuating our retroactive mentality and our self that are adversely affected by the fallacious introduction of this character in our religious as well as native history. The Speech Writer stars a former political speech writer whose sole mode of reconnecting with the world after having retired is to daily broadcast his speeches across the street from his home. Documented in the form of ten flip books, we spectate him adorn his uniform and deliver his oration. We watch him rejoice in his momentary realm of freedom but we cannot hear his speech nor can we view him and his domain in entirety.

The aberrance follows in Abidi’s latest pieces. In Most amount of people standing still, Abidi assembles a city wide silent protest that she feels will never actually happen. The overwhelmed response to viewing a horde of people is immediately punctured once one debunks the visual as Photoshop trickery and identifies the reappearance of multiple faces within the frame. The artist playfully derides the often doctored images which surface as evidence to numerous rallies and protests on social media. The title comments on the mistaken gestures of nationalism which once surged in both India and Pakistan leading to a competitive match of many farcical world record attempts. The uninterested crowd, like sheep in herd, stands muted in aim to hold a record – the irony lay in the hollow gestures which in effect produce nothing concrete to unite the diverse population.

The concept sprung from a preceding video An unforeseen situation in which Abidi risibly portrays a sequence of factual events. Although with intended alterations she combines two chronicles: a series of failed feats organized by the Punjab Ministry of Sports, and the patriotic attempts by a resident from Lahore to crack the most walnuts with his head in one minute. By weaving her own story line the artist questions consequences of corruption, misconceived pride and negligent misrepresentations that is casually undertaken even on large scale.

Abidi’s work is an anecdotal documentation. It is amusing yet lugubrious. Ostensibly she anatomizes the everyday life in Karachi. As her practice stresses, there are as many everyday life as there are people, places and the ways of living. It is not something common across the human race; in fact, one’s everyday life itself is quite malleable and is shaped from individual to individual. Her work in essence is a question of discovery – what must and can change in people’s lives. She underscores how we as townsmen and women live, how badly we live or how we don’t live at all. Her analysis suggests possibilities and demonstrates these possibilities and a lack of fulfillment which in reaction affects other disregarded citizens as well as the city itself. She calculates a critique of morality and its agents, the political realms as well as class divisions by everyday social practice and vice versa. Similarly she assesses the real by the imagined and what has happened by what is possible and vice versa. In fact, Abidi is keen on incorporating the staged and the actual. She appoints actors to play various characters, teleports venues to different epochs, and orchestrates a historical narrative to present fiction as fact. This arresting technique underlines the fragile foundation our identity rests on – woven to a severely fabricated history and nurtured in a disoriented atmosphere. As a consequence Abidi makes it difficult for viewers to avoid identifying the didactics in her sardonic yet dejected approach; triggering one to relish, if not preserve, the evanescent while their city moves on.

One Response to While the City Moves On