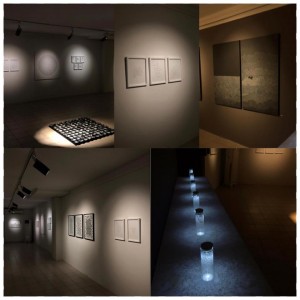 What do they say

A solo show by Faizan Reindinger, curated by Humayun Memon and co-curated by Huma Tassawur opened at the Art Chowk Gallery on Feb 18th, 2021.

The works had monotone white, black and gray themes. People often categorize colors to certain occasions and events, but Faizan does not see the colors as perceived by the world. He looks at them the other way, maybe black as a color of joy, white as a color of peace. Faizan, a self-taught artist and a musician, created music that was meditative and powerful enough to put the mind at rest as soon as it touches the ear. The arrangement was brilliantly done as the white walls had white-themed works and the black walls had black-themed works.

Faizan’s show’s title is actually a question that people often ask him when they observe his work. He believes that his work is open to multiple interpretations that is not clouded thus inviting viewers to find the meaning on their own.

Meandering through the sparse divisions of the gallery, one finds themselves taken aback by the push and pull of the visuals within the space.