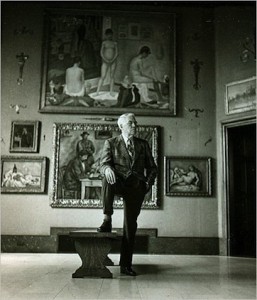 The Lens of An Assured Eye

“What you really collect is always yourself.” – Jean Baudrillard

The urge to acquire and own art is a time-honoured one. From the grand patronage of Renaissance popes and princes (not to mention de Medici), to eighteenth-century British aristocrats, or the bulk buying of Europe’s cultural heritage by America’s J. Paul Getty, over the centuries art has been amassed for purposes of propaganda, prestige, intellectual enlightenment and sheer pleasure.

Few activities run the gamut of human impulses more comprehensively than the acquisition of art. Yet, however lofty or ignoble the underlying motivation, the cultural significance of art collecting has always extended beyond individual desire. The choices made by the collector affect not only the monetary value of art, but also its cultural status. Collectors have had a lasting impact on the way art is exhibited and perceived, and even what kind of art is produced. When the British Raj amassed quantities of plundered textiles and metal ware, their love of these works influenced both the fellow collectors and the artists of the time; while a few hundred years later, Charles Saatchi’s presentation of Minimalist and 1980s American Art had a direct impact on many of the young British artists who were themselves to enter his collection.

The art collector’s influence is broader today than at any other time in history. After all, why are art galleries and gallerists busy spending time and energy on a near-perfect display of art? Who are they all (the gallerist as well as the artist) trying to lure? Why is it important for the artist to know, swagger and often strut around whose collection his/her artwork has landed into? Why does the art gallery (and/or the artist) that manages sell-out shows, havea chip on its shoulder? The speedy dissemination of information and the ease of international travel offer the collector unrestricted access to an art world. From being a strictly specialist subject catering for a small elite, contemporary art has entered the cultural mainstream in an unprecedented way. This is, perhaps, where one can draw a line between ‘collecting art’ and simply ‘buying art’.  Regardless of the motivation, a collector has a serious, eclectic and discernible approach to accumulating art whereas, in comparison, a plain buyer is a sporadic customer for who the value of art may not be the prime consideration while picking up art arbitrarily. Artists are given celebrity status, and in New York City it is a widely quoted fact that more people visited Imran Qureshi’s in situ artwork on the Met’s rooftop than attended Michael Jackson’s concert at Madison Square Garden. As the worldwide proliferation of museum buildings and the ever more congested calendar of international biennales and triennales testify (let alone private art galleries and art fairs), contemporary art is now a key sector of the leisure industry and a powerful force in urban and national regeneration.

Linked with this recently raised profile is the rapid expansion of the market for contemporary art. This is now a ‘global economy’ supporting large and interconnected communities of buyers, sellers, curators, critics and artists. In this frenetic milieu, the boundaries between the private and public sectors can often become blurred. The opening of Art Basel, the most prestigious of the contemporary art fairs, heralds a simultaneous series of exhibitions throughout the city. From Ayyam Gallery to the tiniest project space on Al Serkal Avenue in Al-Quoz and DIFC, every gallery in Dubai schedules its best shows to coincide with the invasion of the international art world that accompanies the opening of the Dubai Art Fair. At the centre of this maelstrom stands the collector: pursued by the dealers for sales, courted by the institutions for patronage and, with often bemused but more often amused tolerance, entertained by the artists.

This obsession with consuming the contemporary can be seen as an inevitable product of our high-speed, commercially driven era. But while today’s art market may chime with the prevalent cultural climate, its origins can be traced back to the beginnings of the twentieth-century.

Obsessive is the word most commonly used to describe the collecting instinct. Compulsive, competitive, neurotic, exhibitionist and self-aggrandising are not far behind. Collecting is sometimes seen as a pathological attempt to control the untidiness of everyday life, or as a means to combat mortality. Sigmund Freud, himself an avid collector of antiquities, defined collecting as “compensation for loss.”  In 1968, writing from the radical standpoint of the era, philosopher Jean Baudrillard derided collecting as the means by which consumer society replaces human values and relationships with material objects.

Collecting is often regarded as both malady and therapy. William Hazlitt wrote of his bibliomania as an infirmity, but he also considered the urge to collect as an inborn and indestructible human trait. David Teiger, a New York City-based collector. once said: “People often ask: ‘When did you first get interested in art and collecting?’ And I say that, with me, it was a birth defect. I really believe that.” Like all true collectors, the serious collector of art is driven as much by compulsion as by desire. The compulsion of the best collectors manifests itself as genuine passion for the art itself. It can drive them to collect beyond their capacity to house, display or even afford. That is probably when collecting becomes ‘hoarding.’

Regardless of how altruistic and intellectual the collector may be, money still matters. It is art, but it is also a market – let’s face it – and a very idiosyncratic one. Knowing that a work has just made its way into the House of Saatchi can indicate that another work by the same artist is worth collecting. The contemporary art market is fraught with risks and opportunities – something that the artists and promoters (read mediators, dealers and brokers) are willing to negotiate. Collectors, as I’ve witnessed, often compare, compete and outshine each other, to join the rat race.

There is an overall pricing structure in the contemporary art world. It begins with the accepted level for works sold at college degree shows but the so-called ‘accepted level’ oscillates every year on the occasion of the annual degree shows. There is no policy and no control. As a matter of principle, as an artist’s career progresses through the various levels of critical and market endorsement, so should their prices. The madness witnessed at the annual degree shows across the country affirms the speculation that the collector/buyer takes ‘young art’ for granted, and thinks no matter what he’s being asked to pay, he is still paying little. Bearing the collectors’ psyche in mind, the young artists, still on the threshold of their careers, have escalated their prices five-fold in recent times. Within these parameters there are frequent efforts to manipulate and thereby ‘improve’ the status of an artist by the gallerist and the critic. At an early stage, he or she can be hyped by an enthusiastic art dealer or seller who sets unduly high prices on the back of sales to a few collectors, rather than on the basis of broader critical recognition. This can irreversibly damage a young artist’s career if the necessary endorsement does not occur as quickly as expected. By buying out complete shows or all of an artist’s production, then promoting it through exhibitions, the gallerist increases the overall value of his holdings mainly by controlling major bodies of artists’ output.

The art market in general and the contemporary art market in particular are notoriously unpredictable. Bubbles can burst and, as the ultimate in ‘luxury goods’, the economic status of artworks is highly fragile. Even when there are no dramatic market swings, the vagaries of fashion and subtle shifts in preferences that decide who is hot and who is not can result in either a rapid descent or a slow decline in an artist’s prices.

Although collectors of almost all cadres and incomes can often be heard saying that they spend more than they can afford, it might be wise to view money spent on art as ‘disposable income.’ Sometimes, collectors start out buying work by mid-career artists, not with an aim to resell, but because they feel more secure spending large amounts on something that they believe will not depreciate. At the same time, they often feel they cannot afford to gamble on works by less well-known or ‘fly-by-night’ artists, as their long-term value is by no means guaranteed. What about collectors who wish to know if the artist has only a few more years down the lane to go?

Collectors come in all shapes and sizes, manners and misdemeanours, preferences and predilections, and all backgrounds and pedagogies. Take, for instance, Howard Hodgkin as an avid collector of Indian miniatures or Ismail Merchant, of furniture and porcelain. “I am a collector of people!” the latter would have exclaimed. The diversity of Merchant’s collection encapsulated his artistic vision. From the fine gilt detail on the bullock-drawn carriage of Prince Mirza Babur delineated by a Fraser album artist circa 1815, to the bold and monumental composition, recorded in a grand historical scale in ‘Thugs of India’, we find a dialogue between cultures. A rosewood card table with intricate brass inlay purchased from the Chor Bazaar in Bombay, and the warm colours of Kashmiri shawls cross shores and sat alongside a fine pair of 18th century Italian mirrors (formerly in the collection of Paramount Pictures) and French Empire candelabra similar to a pair in Châteaude Malmaison, in his NYC loft.

The best collections are born from a deep personal engagement with the work. Collectors have a clear understanding of why they respond to certain kinds of work. It is not enough to declare: “I know what I like.” The process of collecting demands rigour, self-awareness, staying power and a serious mindset. It is a long-term, sometimes lifetime commitment, and one that is highly esteemed, such as in case of Anupam Poddar’s collection of contemporary Indian and Pakistani art. The collector who thinks deeply and seriously about what he or she acquires, and who harnesses passion to intellect, wins respect in all quarters, regardless of spending budget. But there are exceptions too, such as Imelda Marcos and her collection of designer footwear.

While huge profits and dividends mean that art is increasingly viewed as an alternative asset class, buying it primarily for investment is not a good collecting strategy. Very few serious collectors purchase art purely to make a profit. Even the most hard-nosed artist resents seeing his work appreciated only in terms of accruing value, especially if he doesn’t receive the benefits. Some collectors embark with their interests firmly in place, never depart from their chosen course, and always keep everything they buy. Others regard art collecting as an evolutionary process: as their vision is honed and adjusted, so the collection is pruned and altered accordingly.

*The title has been taken from an introduction by Dr Amin Jaffer.

Aasim Akhtar is a visual artist, writer and curator. He lives and teaches in Islamabad