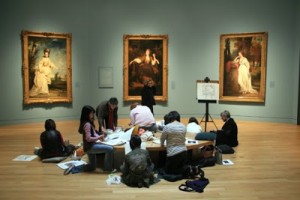 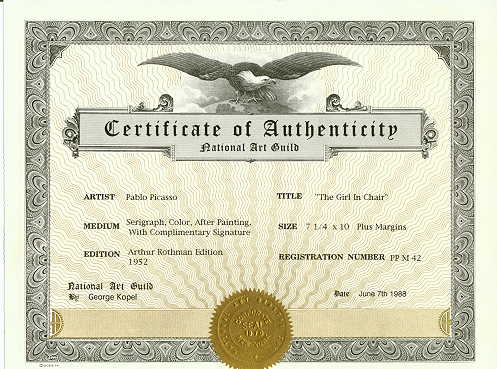 The Art of Forging Art

Back in early 70’s, when I was Principal of the Central institute of Arts and Crafts, Karachi, a woman carrying a painting under her arm walked into my office. She wanted me to verify if the painting, which she had acquired with great zeal and for a large sum of money, was a genuine Chughtai. A cursory look at the work and I announced to the obvious dismay of the visitor that the painting was a crude copy of the master. I had no difficulty in detecting the fake Chughtai but it became very difficult for me to explain when she asked, “How could you tell?”

Soon after the demise of Chughtai, and even during his life time, fake Chughtais had proliferated the Karachi art market. It would be naïve to perceive that practice has ceased.

More recently, I was in the house of an avid collector. The host showed me an oil painting and asked if it was an original Sadequain. The concern of the collector was real. After Chughtai, a much larger number of copies of Sadequain are in circulation in the art market today.

Art forgery has been in practice for many centuries. The Roman sculptors copied Greeks to learn and to earn. The wealthy Romans were eager to buy copied Greek sculpture to decorate their villas. The Renaissance artists and their pupils also copied Roman and Greek paintings and sculpture as a way of learning classical methods and techniques. These copies were also well in demand and a source of revenue for the artists. There was no legislation against counterfeit art then. In our time, in spite of strict laws and harsh punishment, the business of forgery has not stopped. In fact, with the increasing demand and value of art, counterfeit art also gained momentum.  In Europe and in the USA, the art of forgery has become more sophisticated and conniving. According to a conservative estimate, of all the major art works in today’s market, nearly 40% are faked. It is also believed that major auction houses also keep their eyes closed when it comes to dealing with forged art.

The greed of making quick bucks, enticed a renowned American art publishing family to partake in one of the biggest art forgeries of the world. Joanne and Kathryn, the daughters of late Leon Amiel who befriended Picasso, Dali and Miro, made a fortune in the art publishing business and were indicted by the US Federal Prosecutors in 1992 for selling forged prints of Dali, Picasso, Miro and Chagall ripping off art buyers by millions of dollars. According to the prosecutors, Leon Amiel, in order to amass wealth embarked on the counterfeit business. After his death his wife Helda (who was also indicted in the case but died during the court proceedings) and their daughters continued the fraudulent business. The experts who testified in the court confirmed that the prints were forged, a fact that the defendants also admitted. However they pleaded that they were completely unaware of the shady business and could not imagine that their father, who was so close to the great masters, would indulge in counterfeit art business. The ‘innocent plea’ of Amiels daughters did not carry much weight in court.

The Amiel family sold a forged Miro for $ 20,000.00, a giveaway compared to the original sold for 130.000.00 in the nineties. When the Federal investigation began in regard to the Amiel family case, the art market from New York to Los Angeles to Tokyo was stricken with panic and nervousness. Scores of galleries worldwide succumbed to skepticism and forced to declare bankruptcy. A Los Angeles gallery closed its door to business after they paid one million dollars to its customers for forgeries that allegedly originated from the Amiel Family. Since the Amiel family case there have been more sophisticated and bigger cases of forgery which have taken place in Europe and America that  manage to deceive even some reputed museums of art.

Not long ago, a young Karachi based artist visited New York and I took her to Soho, then renowned as the world head quarter of art. We entered a gallery which displayed prints of Picasso. I had realized the truth about the prints as soon as I entered the gallery. The young artist however was thrilled to see prints of Picasso being sold at a giveaway price. I informed her that the prints were not original but rerun in the printing press, imprinting Picasso’s signature in the process as well.  The salesman tried to sell us a supposedly original print for as little as $9000.00. When I questioned him about the authenticity of the prints, he would not give me a straight forward answer. This incident also reminds me of a low level art seller in Karachi who tried to convince me that the photocopies of Sadequain’s drawings he was selling, to ignorant customers, were in fact originals.

Forging art is not always illegal or unethical, and you can make money too. You may copy a master whose work is in public domain or whose copyrights have expired. There may be different laws in each county about what does, and what does not come under the public domain. In the USA, you may copy a work of the original creator if 75 years or more have passed since the artists’ demise. However, you cannot sell a copy of, for instance, Rembrandt or another deceased artist, giving the potential buyer the impression that he is acquiring original work. You have to indicate appropriately, in the front or the back of the copied work with an acknowledgement i.e “after Rembrandt” or “copy of Rembrandt ’’. Having met this legal requirement you can charge the potential buyer whatever he is willing to pay. Cautionary measures are still necessary if the work is in a Trust or belongs to the estate of the artist.  The works of an artist, writer or a photographer who is either a Federal employee or on public payroll are part of the public domain. Works of a living master or a senior artist can also be imitated to learn techniques or to improve your own skills.

The question remains, how would you protect yourself from being conned by a forger or a dealer of forged art? Obviously we are not talking here about a major art transaction of millions of dollars. There is a long list of methods and techniques the museums use when examining a work. It includes visual examination of style, brush strokes, material of canvas or stretcher and many other minute details. With the advance in science and technology counterfeit art can be traced through carbon dating, digital analyses, forensic authentication, X-Ray and so forth.

In Pakistan, paintings age faster due to the presence of heavy pollution in the cities. Cities are covered in smog which carries carbon monoxide, carbon dioxide, sulfur dioxide, ammonia, and other chemicals emitted from motor vehicles and factories. These chemicals are extremely dangerous for any living being as well as everything else in the environment. This chemical laden dust, when settled on paintings, begins to erode pigments and sheen. Almost all paintings produced 10 years ago or so will show some impact of pollution. A number of works by Sadequain, Shakir Ali, Ahmed Parvez, Bashir Mirza and other artists of the 60’s have deteriorated because of pollution alone. Some paintings even show visible cracks. Of course there are other reasons of decay on the artists’ part such as their use of non-archival material, improper application and lack of understanding of chemistry of pigments, mediums and solvents. A separate discussion would be needed to address this particular issue.

In the relatively younger art market of Pakistan, a little prudence and common sense can prevent a fraudulent deal. Take an immediate step back if someone tries to sell you a painting of first generation Pakistani artists and it looks fresh. As pointed out earlier, familiarity with work habits of the artists and the material they use can also serve as lead to detect a forgery. For instance in Pakistan, back in the day only a few artists used prepared readymade imported canvas. Sadequain was one of those artists. A Sadequain done on a canvas made domestically (which is in fact considered better by many) and hand prepared, is most likely a fake Sadequain.

If you are a novice, do what you would when for instance buying a used car. Take a mechanic along with you. A mechanic in this case is a trustworthy art dealer, an art historian or an artist. These people are well acquainted with the style, technique or particular skill set of many artists. Sometimes, history on the methods, materials and work habits of artists can also be helpful in determining the origins of a particular work. Ask the seller about the provenance of the art work in question. Check if the answers are verifiable. Best of all; place yourself in the driver’s seat. Increase your awareness through education in art history and art appreciation. Dabble in art, meet as many artists as you can and visit art exhibitions frequently.  Be skeptical if someone tries to sell a work of art for 25% of its market value. Remember! Picasso is not sold at store front art galleries, and you will rarely find a Chughtai in a back alley.