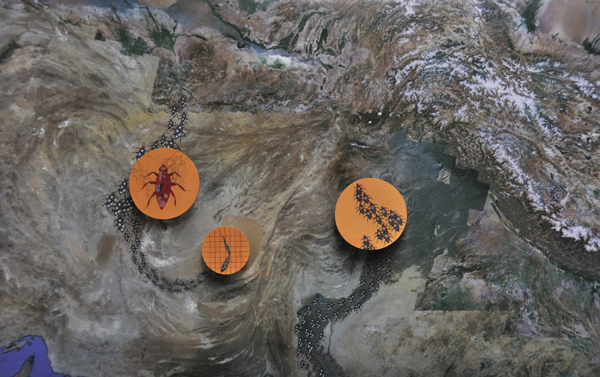 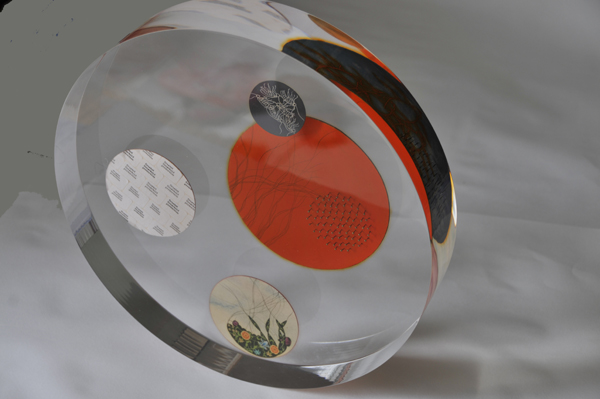 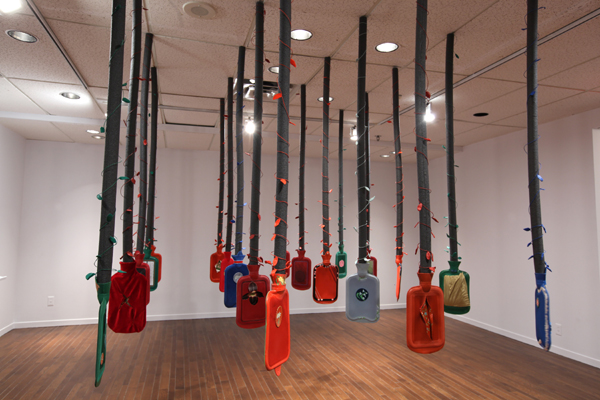 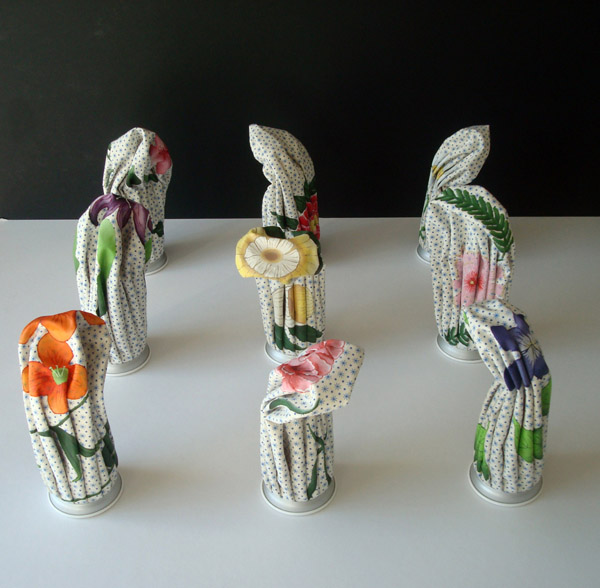 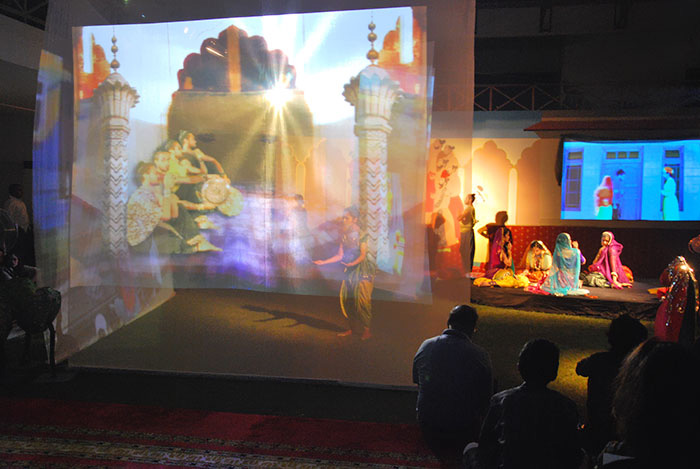 ArtNow: The idea of entomology is an integral part of your oeuvre. What does it mean to you? What is the significance of the cockroach?

Tazeen Qayyum: I use an image of a cockroach repeatedly in my work to simultaneously attract and repulse; commenting on human rights violations and fatalities as a result of war. The bug crept in my work back in 2002 when the US and its allies launched the war in terror full force. When people are killed like insects around the world; we question our own insensitivity and the diminishing value of human life.  Since then my work and its narrative has developed as we witnessed how the war progressed and its consequent effects.

I take pleasure in creating metaphors, multiple layers of meaning and using subtle humor to address serious issues. I enjoy creating a forced and artificial order in my work that is similar to museum archival practices. I borrow the language of entomology, and reference insect museum displays, to explore how categories and classifications parallel the agendas of political propaganda. Using real entomology pins and labels, the insect images are open to inspection and investigation, are classified, labeled and eventually presented in display cases, a notion similar to how unfamiliar cultures are feared and classified. The labels offer significant yet vague texts, derived from scientific facts on cockroaches, and war related facts and figures. Using universal pesticide warnings as my titles reference and evoke dehumanizing ideas.

Selecting a cockroach in particular as my metaphor plays with the notion of ‘stereotyping the unknown’, a household pest that is universally detested and difficult to eradicate, shows an interesting contrast of beauty and grossness in my work, and a unique similarity to notions of religion and race based fright.

AN: How has the progression from miniature artist to installation artist happened for you? Was it progression or experimentation with materials and spaces?

TQ: I believe it is a little bit of both. Although I’m not a very prolific artist but throughout my practice I’ve tried to experiment, stretch the boundaries and be different. Even with my paintings, the ones mimicking the entomology museums, I had started presenting the paintings off the walls and flat on pedestals to be viewed as showcases thus offering a different viewpoint to experience the work. Later, within the same series I created some sculptural works by embedding my miniature-style paintings in single cast Lucite discs; these were 3-Dimensional and combined experimentation with materials.

I consider myself very new to the discipline of sculpture and installation and thus the excitement and challenges are anew. I plan to continue this exploration in future works.

AN: Tell us about the hot water bottle project. Did the project engage other disciplines under the single medium format, or were only the narratives diverse?

TQ: This is an installation-based, mixed media project titled, Our Bodies Our Gardens, a phrase derived from William Shakespeare’s words “Our bodies are our gardens to which our wills are gardeners” (Othello). By gathering personal stories from women, this piece consists of hand-painted old-fashioned, rubber hot-water bottles, ice bags, foam insulation pipes and clay thus creating objet d’art from common objects.

The hot-water bottle is generally associated with comfort and pleasures and for me, serves as a metaphor for the female body. To create this body of work, I had requested several women from various cities across the globe to send me their own hot-water bottle (if possible) along with a short write-up on their personal journey or an experience which would inform my creative process. The response I received was overwhelming, and the interpretation of the call was as diverse as the backgrounds of the participants themselves.

Thus the work created is a visual representation of every story received. The installation examines the challenges and everyday struggle of a universal woman and its commonality. Scale and location may differ yet the struggle is familiar, arising as issues of relationship, sexuality, love, fidelity, politics, health, comfort and stability. Each bottle in the installation is linked to the individual narratives I received.

Accompanying this piece is a sculptural piece title Thee Only Do I Love created using commercial canvas ice bags. Each bag is painted with images of flowers, such as Martle, Purple Violet, Jonquil which, in Western symbolism are associated with fidelity in love and faithfulness. I found the following quote by George Mikes quite fitting “Continental people have sex lives; the English have hot-water bottles.”

AN: The tableau vivant was a novel idea for Pakistani viewers. How was it received in Pakistan and abroad?

TQ: In 2006, I created my first tableau vivant of a traditional miniature painting, titled ‘Lady Excusing her Love Bites as Cat Scratches’, this project was created with the support of SAVAC (South Asian Visual Arts Center) and was presented in Toronto and Saskatoon, Canada. For me it became a completely new way of making a contemporary miniature painting but this time by merging it with a historic western art practice. The project was received very well, and I was awarded funding to further develop the project. Therefore the following year, I directed a collaboration of 14 Canadian artists and musicians through a workshop process and presented a tableau titled ‘Double Date’, in Toronto. It was a novel idea for Toronto as well, and the response was great.

My prime endeavor was to explore how historic artistic practices and visual strategies would mediate and meet the contemporary expressions in art today, as well as how different artistic practices, if put together, reflect and respond to the political, social and cultural setting of our times.

In 2010 this model was brought to Pakistan, working in collaboration with my better half, Faisal Anwar (new media artist). The project was possible with the support of VASL artists’ collective and Indus Valley School of Art and Architecture.

The most interesting aspect in Pakistan was the workshop with the Fine Arts students at IVS, where they were encouraged and challenged at every step and contributed a lot to the project, thus the process itself becomes more important than the end result.

I felt that the project was more meaningful in Pakistani as the audience and the participants were already familiar with the genre of traditional miniature painting and thus could enjoy the similarities in the two traditional art forms and how the painterly elements were brought to life. In Karachi I was also conscious of how the work relates to my ongoing political commentary in my art practice, which led to the selection of the painting of Pundava brothers leaving Drupad’s court after their long exile. The story very subtly drew parallels with the current political dramatics of Pakistan.

AN: Do you feel that as a Pakistani artist and a miniaturist, you are exoticized by western audiences?

TQ: I feel the ‘exoticism’ associated with Pakistan or the South Asian region has lived its course, today we are practically a household name in North America. There is definitely a growing interest in the contemporary arts from Pakistan but I strongly believe that has more to do with the strong narrative, critical expressions and the quality of work coming out of Pakistan today.

Back in 2000, during a residency in Vienna, and traveling through Europe, I definitely felt that my art and I were both viewed through the ‘exotic lens’ which at that early stage of my career did not hold much meaning to me. Today, living and working in one of most multi-cultural city of the world, I might occasionally experience a lack of understanding amongst my audience, and sometime a bias against miniature painting within the art critics but not exoticism. I do not brand myself as being strictly a ‘miniaturist’ either, as seen in my practice too, yet I’m satisfied how the sensibilities of my miniature painting background translates into my work.

AN: What has been your most important exhibition in terms of the development of your work?

TQ: Most of my exhibitions have played an important role in my artistic development, the reason being that every time I get invited to participate in a show, I force myself to rethink my work, challenge myself to create something new based on the curatorial vision, and design my display according to the space so that the work is viewed in a comprehensive way, even within a group show setting. To name two shows that were most important in my view so far are ‘Gendering Detail’ curated by Kristy Phillips , at Art Square Gallery Toronto and  ‘Urban Myths & Modern Fables’, curated by Haema Sivanesan, presented at the University of Technology, Sydney, Australia and Doris McCarthy Gallery, University of Toronto Scarborough, Canada. These were the shows for which I fully explored the idea of mimicking entomology displays.

ArtNow: Your husband is a new media artist. Do your works ever overlap or coincide at a conceptual level?

TQ: It is very rare that Faisal’s work would overlap mine as both our practices are quite different, not only as a genre but our concerns and inspirations are very different as well. Yet both of us have a tremendous positive influence on each other’s work, mostly through our feedback, encouragement and discussion sessions. The one project that we created as collaboration was the performance based tableau vivant.

AN: In your work exhibited at The Rising Tide, you digressed from your entomological theme and addressed issues of urbanity and mapping of terrains. What was that about?

TQ: The selected works at The Rising Tide were from a series of work created for a solo exhibition in Karachi the same year. These works too had the entomological reference but at the same time had a parallel narrative that was specific to Pakistan at that time. These works were a look at the developing, conflicting yet complex, situation in Pakistan, where a military war is declared on its own people, and the growing divide in opinion. One of the painting exhibited was titled Poisonous if Inhaled, it was a diptych which included the mapping and a satellite view of an urban setting, with an overlay of, factory-like, colored pipes flowing throughout like a network.

These pipes eventually converged into the second half of the painting where I showed the same colored pipes systematically creating identical cockroaches, as if on a conveyer belt. I guess the metaphor is quite self-explanatory. I feel it is about time that we as individuals and as a nation recognize and address the grave effects of what happens around us.

TQ: Living in Toronto and working from home; I do not have the luxury of a large studio space. I do have a small room designated as my studio, where one corner is set up as a typical miniature painting studio and another with my writing/computer table, and the rest holds my books, paintings and music. Juggling between the house, a young kid and work, I try to spend some quality hours of work every day and a lot more if working towards a deadline.  For works that require more room, I take the liberty of transforming any space in the house into a studio, one of the many advantages of having an understanding artist partner.