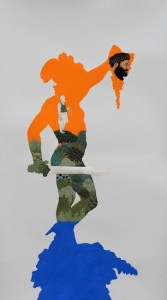 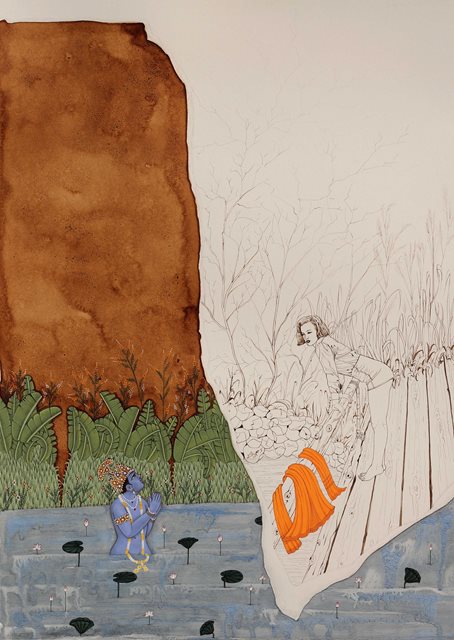 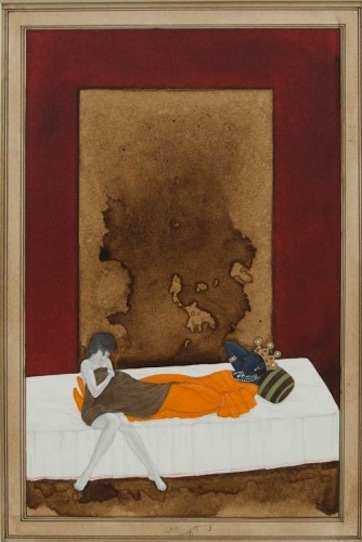 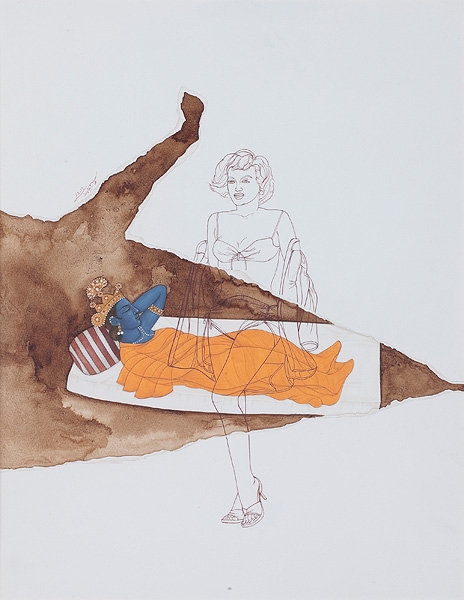 As I stand outside a centrally located home in Johar Town, which acquires a personal aura and truth of material, there is a sense that I am already at home. The gate with raw wooden planks and brick elevation gives a silent comfortable welcome. I’m greeted by the artist and directed to the studio… upon entering the experience reaffirms itself. It is a square room with a large window, a large miniature desk-workspace with ceiling lights right in the corner-centre, a single comfortable sofa chair across it. His son’s toys are lying on the floor, while a traditional carved corner wooden shelf sets the mood – a sweet fusion – where on the other extended corner a large casual bookshelf is stacked with books, catalogues and a soft board opposite it with group pictures of shows and their invites.

Like Waseem Ahmed’s current stance, the conversation waves boundlessly where we contemplate, reject, accept and wonder over the contradictions and colors of society and art practice. Ahmed shares how during the Green Island International Human Rights Artist’s Workshop, Taiwan, in 2007, certain experiences were unforgettable; for instance, when during their presentations a French artist decided to address the audience in French and not in English although she could speak in English. It caused great dismay and difficulty because it had to be interpreted in English for everyone else. To respond the other artists did the same…they all presented in their first languages and refrained from talking in English. This example was crucial in pondering over how as people we could make things easier or more difficult for each other. “We were three artists from the subcontinent during that time i.e., from Nepal, Bangladesh and Pakistan and everyone asked us if we were from the same country; we appeared as one because we chose to speak the same language with each other.”

Contemporary miniature in the world now is getting undivided attention. I question Ahmed about its position as an art…it’s confrontational and powerful, unsettling connect with tradition/region and for once, being a contemporary painter myself, I get a rational, reflective and convincing answer. He shares: “In 2003 I exhibited works in Rohtas Gallery Lahore; they were water color paintings on vasli paper with a layer of gum arabic and I realized then that that work was not what I ‘had’ to do…not what I’d chosen miniature painting at the National College of Arts for.” He continues to explain how the world over it is been a norm to segment genres. Just like all subjects are separate and have their own vocabulary, miniature painting is a complete subject with its own vocabulary. It has evolved and shaped itself through different practices and times but some core values have remained constant and they are like the laws of any subject …which have to be revered. From perspective, pigment, technique, simplification and elements of nature – a miniature painting is distinct with its rules. He emphasizes that “small does not mean miniature” and these precious attributes in different subjects are what have supported archival divisions through the ages. In terms of rendering, medium, aesthetics and values it is different – “I’ve looked into and studied cultures and societies in-depth and the culture, temperament, mizaj of the people in the east is different from the west and that comes about in the work; the west mastered its own visual vocabulary”, the industrial revolution changed the imagery and affected temperaments across the globe. It also directly impacted the craftsman…where machine, less-time-consumption, mass production was preferred and the man-made product became more distinct – enhancing its quality only in certain pockets where it was facilitated but losing it generically. This leads us to talking about how the Chinese market has taken over the world and he mentions how his son’s Legos (made in China) have large pieces which don’t fit into each other while ‘the real one’ not made in China, is made to perfection. Every minute piece joins.

Ali Abbas’s MA class fellows told Ahmed (when he was a grade eight student in Latifabad/Hyderabad) that his painting was too subtle in color and he needed to add more color to it. “If I put all the colors in one painting how would I save them for the other paintings!” he replied. Ahmed pays homage to his teacher, artist Ali Abbas, who was there for him as a mentor and guardian angel through the time when he needed it most. He reminisces and shares how during his school years art classes had been initiated at the Iranian art council in his hometown, which was an otherwise backward place. Ahmed did not belong to a social strata where his parents could support the education of all his siblings and cater to their ‘other hobbies’ as well. He had to discontinue the art classes during the course due to that reason. Ahmed’s teacher Abbas met his family and convinced them that he would just need to continue attending and all else would be taken care of by the organization. Years later when Ahmed was leaving the classes and was ready to enter college he got to know from an administration personnel in the council that the program/classes were not of the NGO self-support type, they had a fee and Mr Abbas, Ahmed’s teacher, had been managing it all along. Ahmed shares with enlightenment and joy that he believes how there are some great people in this world.

Currently the artist is preparing for a show in Germany’s Asian Art Museum, Berlin, curated by Martina Stoye, and participated in the French art fair, Drawing Now, with a exhibition, ‘The Narrative’, put on Gowen Contemporary, a Swiss art gallery. My visit to his studio subjects from politics, observing and talking about works, society and its intrinsic layers, what we see, what it is or what we are shown. Ahmed’s imagery is a playful dialogue; it is coherently serious in its urge to play. For instance he explains about the Krishna series… Krishna, a seller of grass…a god – it is a shift of roles – what is he worth as a ‘die-hard’ lover of goddess Marilyn Monroe, posing and planning ways to impress her in the works while she lives unaffected and estranged. In the blindfold visual (a recent work in the studio), the blindfold itself shifts/changes like a chameleon through different works – a utopia – a dream – a promise – a bluff – a secret… it could be anything. I ask Ahmed about his groundbreaking achievements and he replies, “none of them is groundbreaking” but there is a plethora of things he can boast about from international awards and coveted residencies to exhibiting at prestigious grounds. Ahmed enjoys great friends, artists across the subcontinent as well, and when I ask he confirms “they are just great people…artists are the same the world over”.

From collecting stickers with fantastical icons from a local tuck shop and replicating them to working for plaza billboards to being nominated for the Sovereign Asian Art Prize and being published extensively to representing art in Pakistan on a celebrated level, Ahmed’s practice is a pivot of impossibilities which become possible. All secret stories are shared with so much ease that they become our own, political observation/conversation becomes a way of life to realize that it is not politics but just life…