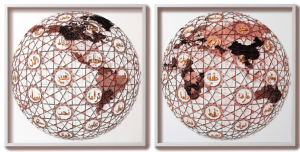 In the heart of San Lorenzo’s neighbourhood in Rome, a pasta factory was transformed into a “creativity building” in the early 80s when some artists decided to move there to live and work. Today the industrial building continues to host art galleries, graphic designers, a school of photography and some artists’ studios. Together with the first generation of artists, which includes Nunzio, Bruno Ceccobelli, Gianni Dessì, Giuseppe Gallo, Piero Pizzi Cannella and Marco Tirelli, many others are working there now. Amongst them is one of the most interesting artists of the contemporary Italian panorama, Pietro Ruffo.

Born in Rome in 1978, Ruffo studied architecture at the University of Rome and obtained a research fellowship at Columbia University in New York. He is represented by Lorcan O’Neill’s gallery in Rome since 2006 and has exhibited widely in all the main Italian cities, as well as Berlin, Paris, London, New York, and Moscow. His works are drawings, aquarelles, paintings, photographs, very small size paper sculptures or huge mixed-media installations.

In 2009 he received the award “Premio Cairo” and in 2011 the “New York Prize” by the Italian Ministry of Foreign Affairs. He was part of a number of artist residencies including “The International Studio and Curatorial Program”, New York, Civitella Ranieri Foundation in Italy and Nirox Foundation in Johannesburg, South Africa. His works are part of many prestigious collections such as the museums of contemporary art in Rome (Macro) and Bologna (Mambo), Deutsche Bank Collection (Frankfurt), Depart Foundation (Rome, L.A.), Fondazione Guastalla (Switzerland) and Lodeveans Collection (London).

His grandfather, Francesco Del Drago, was a well-known abstract painter and Pietro Ruffo’s first works were influenced by his ancestor’s big size, colourful, geometrical canvases. But the young artist found very soon his own, unique and very sophisticated style. The bright colours disappeared quickly to leave room to a deep, complicated, yet discreet research in which the ‘abstract’ became one of the many layers.

The first series of works of his new script might be Human Geology, where macro-photographs of details of vegetable origin are juxtaposed with satellite pictures of cities showing the result of different kinds of human intervention. Baghdad during the bombing, Kabul’s blast scars, Maha Kumbh Mela before and during the pilgrims’ immersion in the Ganga, are some examples.

From then on maps became a recurring presence in his practice. Pietro Ruffo draws them with a delicate pencil-line; sometimes they are the main subject, some other the backdrop. Together with the flags, also very popular in his art, maps talk about globalization, and meditate on how sometimes the political and economic decisions of a localized élite, influences territories, believes and everyday life of many populations around the world.

In Not in My Backyard (2008), he ponders on contemporary colonization by collecting and reproducing some of the treaties signed from 1945 to 2002 between the USA and countries in South America. He then cut and bent the documents to form insects.

Pietro Ruffo’s interest in contemporary history leads the artist into an in-depth analysis of, more or less, recent events, where he sometimes points out thorny, omitted or just insignificant facts to transform them into timeless tales. His works are a sort of poetic and aesthetic second reading of some of the main facts of humanity and at the same time they tell about an imaginary ‘never land’.

Another interesting example of the visual and ‘unfinished’ historical and political analysis of the Italian artist is the series of works born around the concept of positive and negative freedom presented in 1958 by the philosopher Isaiah Berlin in his essay “Two Concepts of Liberty”. In The Six Enemies of Freedom (2009-10), Pietro Ruffo’s portrayed six philosophers from the French Revolution period with graphite and notched paper. In order to further investigate the reasons for the failure of the liberal models, he video-interviewed some of the most renewed contemporary Italian savants on the concept of freedom.

The desire of freedom during revolutionary periods is another theme that inspired Pietro Ruffo’s latest works. The chain of protests and extreme manifestations happened in many Middle Eastern and North African countries during the winter of 2010/2011 became the starting point of the artist’s series Arab Spring (2012). Golden words from the street’s slogans emerge from the artist’s world maps, cut and assembled in different layers and painted in watercolour. The geometric shapes that fill up the series symbolize both traditional Islamic decoration patterns and the web used by protesters to communicate though social networks.

During his last artist residency Pietro Ruffo also analysed the pre-revolutionary moments of South Africa. He writes in his statement that “the interest in this specific historical period is the same interest that led me to do the works on the Arab Spring”. He explains: “Before a revolution, before the time when something changes, the people have a unique idea of freedom, freedom against the tyrant, and this idea is very strong in their mind. But then when they get what they wanted, that large initial energy, potential energy, needs to be channelled and transformed to build a new society, but it is much more complicated and they often begin fighting amongst each other.”

Lavinia Filippi is an art critic, curator and writer based in Pakistan and Italy. She has worked for international art galleries and museums and is a writer and anchor for Italian National Television (RAI)