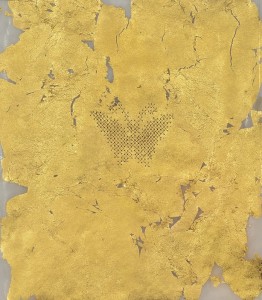 Reverberating Sounds Echo Through the Desert

Identity has an impact on politics, economy, culture and the arts. The Sindh art show at Koel Gallery piqued this experience for many. It refreshed the spiritual and demographic connection amongst the artists who have had their grounding and early visual art training in the province, particularly from interior Sindh. Kudos to Noorjehan Bilgrami and Muhammad Zeeshan, the curators of the show, for bringing together a show of such magnitude, profiling masters, celebrated artists, mid-career professionals and emerging artists, all under one roof. The display was unbiased and represented all artists judiciously, irrespective of their name baggage and caliber.
While the elaborate and extensively publicized Sindh Festival was fresh in our minds, this show organically stirred yet another interesting and organic discourse around ethnicity, tradition, rooted-ness, connectivity and regionality in the art world. It inspired debates on one’s origin and how it swayed individual motivation, style and inclination. But what would one expect for non-Sindhi artists who found or re-discovered their roots in Sindh or Karachi – that there might be something distinct in the “Sindhi” experience which is independent of birth?
Although one could debate around the show being region-centric or ethno-centric, the curators were attentive to the fact that there was hardly or no metropolis flavor or Karachi-ness to the show. They consciously kept it apart. Consequently, the city played out to be an entity independent of Sindh. I believe drawing that boundary was important to the impetus of the exhibition otherwise there would have been no limits to the nature and kind of work engulfing the show if all Karachi-based artists were to contribute towards it. But imagine a similar show, taking place in the Punjab; the narrative might be quite incomplete, or even impossible, without the presence of Lahori-ness!
There were seven female artists in the 57-artist show; Manisha Jiani, Shahana Munawar, Firdous Siddiqui, Mussarat Mirza, Scheherazade Junejo, Rehana Mangi and Nazia Gul. Although Scheherazade Junejo’s Tongue-Tied, inspired by various moods of dance, mime and theatre, was strong and impactful, she seemed to be a misfit for the nature of the show (born and raised in Karachi in a rather liberated and elite environment, with little connection to interior Sindh). Rehana Mangi’s iconic manner of drawing with her hair and gold leaf on wasli, once again, caught the attention of many. Mussarat Mirza’s Dar-e-Tooba was an oil painting on canvas rendered with earthy tones of ochre and burnt sienna subtly representing closed muddy doors of a prison vault.
The late A.R. Nagori and late Ussman Ghauri’s work were value additions to the show. A. R, Nagori’s Gloomy Riderwas a blatant political remark on the crisis of urban and rural Sindh. A nude rider on horseback seemed to be tripping or jumping over a red tombstone. Clearly one of my favorite works, his spontaneous marks and a vibrant color palette ironically heightened the gravity of his dark content. Ussman Ghauri’s seven piece wall installation of human portraits on drop-shaped wood structures hinged with floral metal hinges at their tips satirically commented on luxury, comfort and happiness.

Two self-taught artists’ works had a visual presence beyond many institutionally trained professionals. Rizwan Ali Umrani’s Present beautifully explored color with acrylic on paper. Muhammad Rustam Khan’s Punjab Culture Charkhawas a detailed and photo-realistic representation of women working at home in a typical, romanticized idea of a village.
Munawar Ali Syed, Abdul Jabbar Gul, Amjad Talpur and Noor Ali Chagani worked in 3-D. In Boundaries, Noor Ali Chagani exquisitely constructed his tiny brick wall in terracotta as “thousands of tiny brush strokes” to build a miniature sculpture, this time adding graffiti to it with advertisements about Aamil Junaid Bengali, deemak se nijaat, and German dawakhana painted on its rugged wall facade. These minuscule mud bricks functioned as transforming units, while simultaneously commenting on the absence of home and a yearning for one’s own space. Another sculpture that clearly distinguished itself in the show was Munawar Ali Syed’s barbed metal wire book form that seemed to contemplate on the nature of knowledge and questioned its hidden and visible potential of harm and pain in Between the Lines.
The star-artists and almost-star-artists (Imran Qureshi, R.M. Naeem, Muhammad Ali Talpur, Aqeel Solangi, Ali Abbas, Ayaz Jhokio, Abdul Jabbar Gul and Imran Channa, being some of them) added immense value to the show. Although it was delightful to see works of artists who have an exponentially growing national and international presence, it was a bit disappointing to see the same kind of works being repeated time and again by some. The highlight was Muhammad Ali Talpur’s black and white, zigzag-patterned painting that was sold for a hefty sum. Afterall, brands do have a language of their own. Ayaz Jhokio continued to surprise the viewers with his refreshing, simple, and representational imagery in Mehrabpur to Khairpur.
‘Some mid-career and emerging artists’ work significantly stood out in their visual content. Naveed Sadiq’s mellow, tea-stained composition of distorted camels within a circular mount offered a soothing ground to rest on amongst a gusty, chok-a-block display. Ghulam Hussain Soomro commented on beauty within stark contrasts of stereotypical notions of high and low art. Going back to his roots in Sindh, he questioned the notion of high craft by integrating forms of low-craft through weaving and intertwining his worked surfaces. Irfan Gul, in Excavators, knottily embedded a male head within a mesh of spongy, tactile marks with acrylics and pen on wasli. Tahir Ali impressed the onlooker with his gestural, expressive lines and intuitive colour choices on a large canvas. Drawn loosely with a blend of observation and imagination, the work instituted elements of an emotional experience. The quirky and rhythmic forms created restless harmony. Through a painted canvas, Agha Jandan critically reflected on his own teaching practices and made a compelling mark with his spontaneous, raw and chalky lines in Blackboard.
Most significant to the nature of the show was a documentation of the evolution of an aesthetic milieu that has been nurturing for the past several decades in the soulful, “reverberating” and mystic lands of interior Sindh. The show paid homage to the ustad-shagird tradition prevalent in the region and acknowledged the dissemination and transformation of the mentor/ustad’s creativity and style to his mentees in a unique traditional way. Some of the ustads were also part of the show. Ustad Lal Muhammad Pathan’s knife painting (oil on canvas) of donkeys with carts and Ustad Mirza Irshad Baig’s monochromatic, balmy and intricately rendered work, Karigar (oil on canvas) were genuine representations of the artistic sensibilities of the era which they transferred to their subsequent generation. Muhammad Zeeshan, now an internationally acclaimed artist (and the co-curator of the show) was one of theshagirds at Ustad Baig’s workshop. Many such contemporary artists, intact with their primary lessons learnt from this knowledge transferal practice, embark on their artistic, contextual and conceptual journeys, further inspiring young artists from their province and beyond. The exhibition was a testament to the aesthetics that have evolved through generations of art practitioners in the region and celebrated the cultural situated-ness within its lucrative soils. Sindhi-bonding at its peak!
‘Sindh: Reverberating Sounds Echo Through the Desert’ was on at Koel Gallery, Karachi, from 18 April – 3 May.
Rabeya Jalil is a visual artist and art educator who is currently affiliated with the Fine Art Department aat the Indus Valley School of Art and Architecture, Karachi, Pakistan.