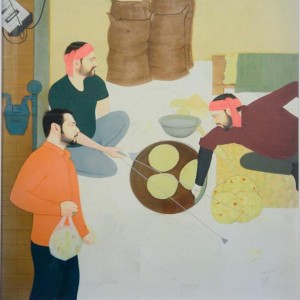 One of the final collateral events to open at the Lahore Biennale, this March, was a 2-person show titled ‘ Personal or Social’. Held at O Art Space, the gallery displayed works of two National College of Art graduates both of who are trained in the traditional Mughal style of Miniature. Traditionally used as illustrations and as a storytelling tool, the art of Miniature has developed over they centuries to depict the realities of its contemporary users.

Sobia Ahmed, a faculty member at NCA, portrays her concerns of the gradual dilapidation of Pakistan’s ideology over the years in her paintings. Using Gouache, Gold leaf and thread, the artist recreates imagery that emphasises her trepidations about the country. Even though Pakistan has long claimed to be in a postcolonial era we are still, like many other countries, stuck under the unyielding thumb of the West. No matter how far we go as a country, our inability to shake the invisible chains the Super Power has clamped on us, has not allowed us to truly prosper.

Ahmed uses iconic visuals such as the moon and star of the Pakistani flag, which symbolise progress and light. Originally depicted in white, the crescent and five-pointed star are painted in greens and reds in Ahmed’s work; some of the symbols are just hollowed outlines, disappearing into the background. Green is the national colour of Pakistan but in Ahmed’s work it is slowly taken over by the deep red foliage, a visual response to the country dreadful circumstances. Red is repeated in her other works as well. Crimson thread is meticulously stitched into gold leaf to create repeated patterns of the crescent and star. Some of the patterns are just pierced holes left behind from the needle.

Drawing on her miniature training, she also uses Mughal imagery to talk about contemporary situations. Mughal figures are dressed in, what seems to be the National flag, while being hung upside down, an allegory on the mistreatment of the country while other figures, outlined through needle point, gather around like crowds unflinched by the horror. Perhaps this is a hint at the desensitised onlookers as a result of viewing constant turmoil. The artist also uses crows and vultures, stylised with the aesthetics of miniature. Generally seen as scavengers, these birds are often seen around (and associated with) death and decay. Juxtaposing it against national symbols and colours creates a discourse of the problems we face today.

Keeping with the theme of today, the second artist of the exhibition, Ahmed Javed, also describe the everyday in his work. Moving away from the political stance of Pakistan, Javed aims at understanding the mundane activity that humans perform in their day-to-day lives.

Also using gouache as a tool of conveyance, he observes the rituals of the common people but through the eyes of original miniature masters. All his pieces, regardless of size, hold aspects of traditional miniature while still holding on to the artist’s own original style. The perspectives are flattened and kept frontal, the figures have side profile but bodies viewed as if frontal while the accompanying objects are seen through an aerial or frontal perspective; all similar to the style of traditional miniature. The colour schemes for the work, though inspired by real life, are also based on the original pieces.

Javed’s seems to depict the life around him, scenes that any of us in Pakistan can relate to, the mochis (cobblers) and naan makers at every corner. The artist even puts himself in the work, casually purchasing naans. It is interesting to note that these scenes may record mundane activity but they also help the viewer to another glance at their surroundings.

The artist creates a fascinating contrast between the ‘Wall of Kindness’ and the barbed wire on the wall. This ‘Wall’ can be seen at several sites in Lahore and Karachi and invites people to hang used clothes that the less fortunate may be interested in taking. Obviously, this helpful gesture is a positive point for the country but the audience immediately is reminded of the issues of security and violence we still face in Pakistan. Barbed wires have been increasingly common in the recent decade with residential areas loaded with them and have, therefore, sadly become a familiar site.

Both artists use their miniature training to understand their surroundings and each one carries it out in a unique way. Ahmed’s use of red, green and gold ties her oeuvre together. These coupled with her meticulous needlework create vivid and intense visuals. Javed is commendable for his creation of texture and distinction in objects through his strong brushstroke and detailed pardakht (rendering). His smart use of perspective and colour immediately links his works to the traditional art while still holding a strong footing in today’s world.