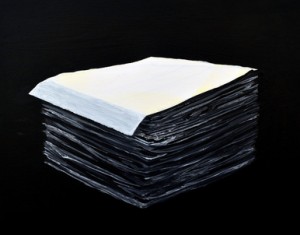 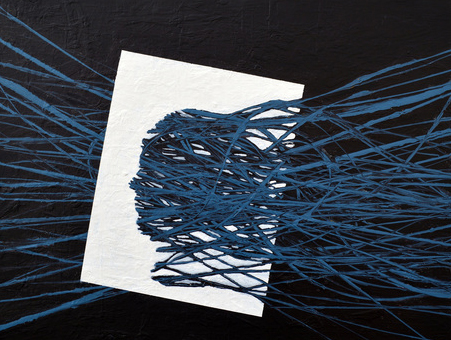 Ali Raza’s solo exhibition titled ‘New Pain-tings’, which opened at Rohtas 2 on 4th February, 2017 was a surprising departure from his previous show held at the same venue back in 2014.

“Seen from here, there and nowhere” had featured what could be best described as lush, textured, lenticular paintings painstakingly made by hand. What had been even more striking, apart from the optical illusion that was created, was the scale and content of Raza’s work: a plethora of representational imagery such as burgers and pizzas amongst other images had been magnified with the images alluding to consumer culture, the chaos and curse of urban life and its many vacuous temptations. The motorized slats of the billboards that he had drawn inspiration from had been retained, but the surface of each one was painted by hand.

One look at his recent works certainly piqued one’s interest. Gone was the breezy pop art and cornucopia of color that had streaked across the artist’s broad expanse of tactile vertical planes. The phrase that came to one’s mind as one viewed his latest works was “pared-down.”

Representational imagery was used sparingly. Works had been executed in acrylic and house paint. Shapes, forms, grids, and angularity, including the importance of the shape of the canvas itself, became an integral part of the subject matter.

“Suburban”, “Things to do”, and “The Unwritten” were like a Holy Trinity of singular color and texture on a monochromatic surface. Each black canvas was humming, seething and practically dancing in a different tactile, singular color. While the synthetic glowing green of “Suburban” resembled small blades of grass or even neatly cut vertical shards of glass, “Things to do” was replete with thick, tactile lines in yellow like dried hay that, on close examination, seemed to melt and bulge in harmony at just the right time.

It is said that ‘all life moves, nothing is static, and that the material world is nothing but sensation and vibration created by the speed of atoms’. In “The Unwritten”, Raza stripped it all down and tapped into these ideas with the finesse and control of his paint. A curling, bubbling, amorphous surface of simmering red magma on black confronted the eye— like magnetic energy contained within the paint. Fragments of two blank white rectangles seemed to peek out in contrast – they were a clean slate before they were consumed; eternal, permanent, primordial. The razzle dazzle of consumerism featured in Raza’s previous work had been dispensed with, and the transcendent now seemed to dominate.

It also seemed as if the artist had taken a scissor to the vertical slats that made up his lenticular paintings and washed away the color, for there they were in “Suburban” and “Things to do”, resembling pristine little white rectangular bits of paper, leftovers slipped in and partially hidden amidst the sea of texture, like niggling thoughts waiting to be formed. And perhaps that is what they were, for in “Hover” the motif was repeated as the central idea: a little white strip vacillating against a dense texture of horizontal lines, waiting for its eureka moment. In the gallery space it had been placed next to “Persistence”, which showed a pile of papers reduced to basic angular forms with one vertical end of the top most page sticking out; an unpainted slat – the sum and its part – a discourse on deconstruction.

One of the most powerful works of the exhibition was Majority/ Minority which seemed to bring this exploration to some fruition. Dramatic and experiential in nature, a mass of all encompassing, dense, overlapping daubs and layers of color dominated the canvas. The eye reveled in it: unidentifiable marks on close examination yet integral to the sum total, the composition seemed to cascade downwards, an explosion, really— weight and density weighing down but not halted by the angular white shape attempting to block their trajectory downwards. It was as if the artist resolved to shatter all representational imagery and celebrated the act.

Three dominant characteristics of Raza’s work, speed, motion, and consummate painterly skill were successfully reenvisoned in this work. Given the potency of such works, “Resume” and “Adam”, in contrast, featuring the silhouette of a face seemed an unnecessary attempt to return to the realm of representational imagery.

“Myopic” echoed with the solemnness of Kiefer and the monumental power of destruction. Small and intimate in scale, it was as if the painter had applied a blow torch to the detritus of everyday urban life. The canvas consisted of a landscape that was akin to a wasteland. The grim silhouettes of trees and the dull sky were eclipsed by this post-apocalyptic setting, but it was the two white ovals (one whole and one hollow on the bottom half of the canvas) like a lens that became the focal point and invited one to ruminate on the title and our existence.

Are we to emit a chuckle at the ironic title of the exhibition, given that it seems Ali Raza has attempted to search, struggle and forage for new modes of expression? Perhaps John Berger can help us dispel this notion as we simply celebrate the act of looking and interpreting when he says “ The one who looks is essential to the meaning found, and yet can be surpassed by it. And this surpassing is what is hoped for.”