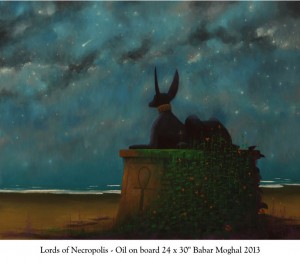 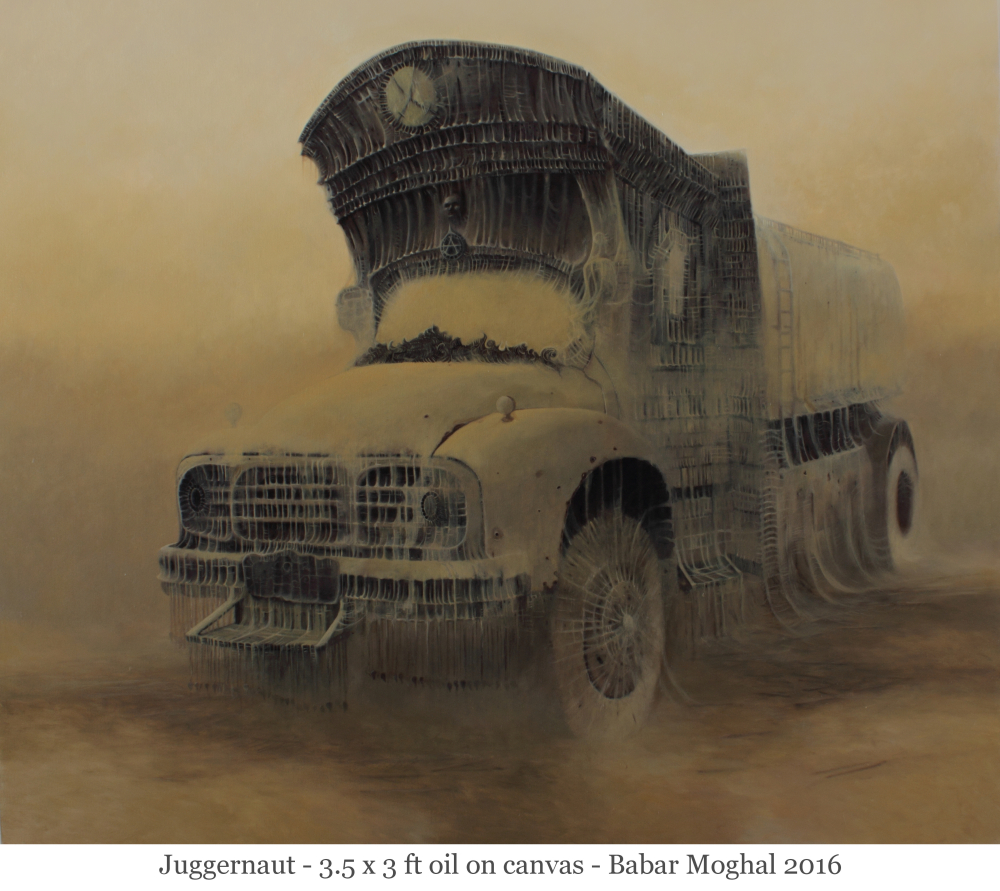 “…but some day the piecing together of disassociated knowledge will open up such terrifying vistas of reality, and of our frightful position therein, that we shall either go mad from the revelation or flee from the deadly light into the peace and safety of a new dark age.”[1]

Fiction writer, Howard Lovecraft, explains that the human mind is vast in its understanding of the surrounding world but one of the most humane things of this lifetime is its inability to draw parallels between the thoughts inhabiting it. Ignorance has become a basic instinct of survival; an unawareness of what is happening and what is to happen.

On March 9th, 2017, Full Circle held a solo exhibition titled ‘Omen’, which displayed works by artist, Babar Moghal. The title itself contextualizes Moghal’s paintings for the viewer who immediately reverts to its history. Omens foretold the future and though, do not hold any particular inclination, have come to reference negative insights for many people. Some of the first recorded omens can be traced back to second-millennia Mesopotamia but still holds some credence in today’s society. Consequently, Moghal’s oeuvre encapsulates its audience with vivid forewarnings of what is to come.

The beautifully bizarre paintings transform the gallery space into a whole other world for the viewer. The artist’s imagery varies from piece to piece; some illustrate mythological spaces while others are occupied by worldly objects that have been left to wither and attract dust. Keeping in mind Lovecraft’s view of society, Moghal’s painting appear to convey a sinister and gloomy world for their audience, forewarning of a post-apocalyptic era that many believe to be inevitable and are yet, oblivious to, in their present day lives.

Working in Karachi as a graphic designer, Moghal began painting as a hobby. Eventually as his interest in the medium grew, he quit his job and began working as a painter full time and has been exhibiting his work in various shows for over a decade now. Moghal’s past experience as a designer can be seen peering through his art which is captivatingly illustrative by means of the compositions and vibrantly unique colour palette.

Inspired by music, his work began as experimental paintings stimulated by psychedelic tunes. As the years went on, the abstract works became clearer in their imagery as the works slowly became more descriptive, though still keeping intact their surrealism, hues and primary inspiration. The abstraction was described by the artist, as initial illustrations of the music he listened to which now seems to have created clearer images in his mind, thereby, enabling the creation of these paintings. Moghal draws a link between the effects of music and art on a person explaining that these enter and break through one’s conscious exterior delving further to enlighten and awaken the subconscious being within.

Moghal also draws inspiration from an assorted number of artists and this insight is evident in his body of work. The concept of symbolism and surrealism are adapted from the works of Swiss symbolist painter, Arnold Böcklin and Belgian surrealist, René Magritte while his use of vast, deserted landscapes come from studies into the work of German artist, Caspar David Friedrich.

Similar to the exhibition’s title, the names given to each of the paintings also steer the viewer’s mind in a particular direction. In ‘Lords of Necropolis,’ Anubis, usually depicted as a black jackal, sits atop something resembling a tomb, looking out to the shore, alert, almost as if in wait. In Egyptian mythology, Anubis takes on many roles, a few of them being protector of tombs and usher of souls into the afterlife. This painting receives context then, and one realizes that though similar to an earthly landscape, they are in fact being engulfed into a space of death, staring at the sea and like the god, anticipating arrivals from beyond the horizon. Upon the manmade structure, on the canvas, was once carved the Egyptian symbol of life now concealed with unattended flora, again strengthening the absence of human existence.

In much the same way, others such as ‘Juggernaut’ and ‘Monolith’ also describe a space of post-destruction with nothing but abandoned windmills and trucks, left to rot away into colourlessness. Interestingly enough, the colour is brought back in some of the other paintings like ‘Aether’ which is covered in crimson and violets and as the name suggests, is an illustration of an anthropomorphic sky looking over her voyagers as they sail through turbulent waters.

“Subjective temporality structures and guides every aspect of behavior and cognition, distinguishing memory, perception, and anticipation.”[2]

When creating the artwork, there is no fixed imagery in the artist’s mind; one object leads to another in the paintings until eventually the whole visual is complete. He allows his subconscious mind to manifest onto the canvas without revealing any conscious thought. It is important for Moghal to create a space where the viewer develops their own ideas from the work while drawing on their own past experiences and allowing their intuitive thoughts to surface.

[1] Howard Phillips Lovecraft, ‘The Call of the Cthulhu’, 2009. /http://www.hplovecraft.com/writings/texts/fiction/cc.aspx