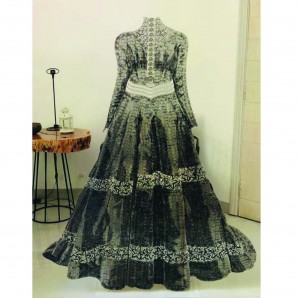 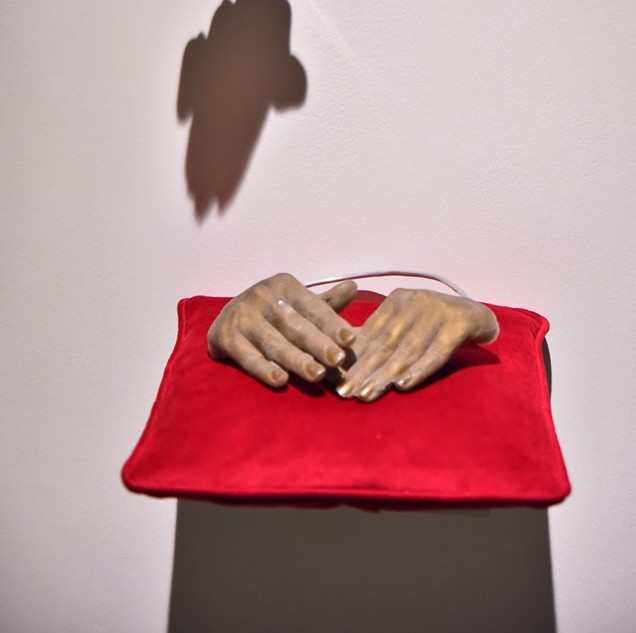 Microcosm III, Curated by Adeel uz Zafar at Gandhara Art Space spotlights the characteristic, unprecedented aspects, attitudes and motivators of an artistic age – this one. Evoked through the work of the twenty mostly millennial, largely emerging, entirely female list of participants, the show was a percolation of energies that lingered with you long after one had left the gallery space.

Exciting at every turn, the show’s curatorial premise was heavily influenced by Artist-Curator Adeel uz Zafar’s penchant for work that was just as technically demanding as it was moving – much like his own practice. Aimed at being a survey of contemporary art by women artists from and connected to Pakistan, the media and themes that were interpreted were extensive.

Addressing the instability of identity, several artists deconstructed themes of history, belonging, space and ownership, as palimpsests of an evolving history with multiple orchestrators at play that create the acknowledged general narrative. Anusha Novlani’s work merged pop culture and humor with a certain degree of self-awareness and self-deprecation, to convey a sense of belonging and lack thereof. Jovita Alvares’s sensitive lenticular prints were a focal point in one of the more densely packed spaces in the gallery, becoming the physical present of a space that is heavy with history. The nature of the lenticular beautifully conveyed the ephemerality of the present depicted scene, using the communal urban space of the gallery to actively negotiate urban aspirations with contrasting but innate desires to beautify spaces with manicured nature. Madiha Sikander and Saba Qizilbash’s works focus on disconnects, with the former depicting the complicated relationship between coloniser and colonised, while the latter uses man made barriers – walls, fences, gates – to ravage the landscape with imposed divisions and separations. Ideas of home and homeland linger in Qizilbash’s work, constructed of objects and spaces that are familiar, but under her treatment they come together to create something more sinister. Rubaba Haider’s meticulous work and stripped colour palette of black and white convey loss and a fracturing of the harmony between various communities that have always coexisted, whereas Howra Batool’s work is a hybrid of painting and sculpture that evokes a visceral reaction to the abstract but organic forms in the work that allude to a mound of suffering bodies. The works aptly convey that there is no tidy definition of otherness. Identity and history are things unfixed, complicated and altering.

Weaving in and out of Zafar’s carefully curated spaces, some purpose built just for this show, the experience conveys varied nuances of thematic consideration and formal order in the artwork and its installation. Though hardly any space is left bare in the gallery, there’s no sense of clutter or imposition between the distinct artworks, rather, there’s an orchestration of contrapuntal harmonies. Quite a challenge that has been tackled very sensitively by Zafar, making sure that each artist was given their own unencumbered space, even creating specially designed false walls and divisions to make sure that each artist and their artworks were given their own space, uninterrupted by the view of another . The meat of the show is diverse and totality engulfs the viewer as one whole, containing variable parts.

One artist whose work was particularly facilitated by these divisions was Bushra Waqas Khan. One of the first things encountered by visitors to the gallery due to its placement, Khan’s Smile Please was almost defiantly challenging the audience to interact with it, playfully conveying through its translucent dress made from affidavits, how odd the agency omitted  and control imposed is, by that laws and legalities place on the moral and sartorial choices of women. An uncomfortable message conveyed with humor. Zafar’s installation of the work allowed for people to walk around the translucent work, wearing it like a dress and being complicit participants and perpetrators of this discomfort.

The extensive list of participants and the multidisciplinary nature of the exhibition was testament to Zafar’s thorough curation, making sure that he was very well acquainted with the practices of all the participating artists, not just one particular work, before inviting them for Microcosm III.  Maha Ahmed, Humaira Abid and Hiba Schahbaz have flourishing practices abroad but have not exhibited as much locally, so their work was particularly striking in this context. Ahmed’s intricate work demands a certain level of attentiveness from the viewer, demanding that they come closer to it and engage it, only after which it reveals itself to them. The negative spaces in the work, just as important as the matter in the paintings, are a beautiful visual metaphor that convey inclusiveness, understanding and acceptance in their lack of specification. Abid’s striking Mother and Child III also uses the absence of form, but she uses it to question the reductive ideals of womanhood and motherhood set forth by the codification of gender roles. Schahbaz’s clever work was divisive for audiences but perhaps that is why it was so important a piece in the show, going beyond its motivators and functioning as a vessel that proved that Schahbaz, like any other women artist, can and should take command of their sexuality, career and public image.

The millennial voice is very strong in the show with Zafar inviting participants who could add to the archive that this survey show creates, by commenting via art on global discourses that are currently surrounding millenials and their concerns. Marium Habib’s Bad Feminist I and Bad Feminist II turns the notion of the commoditisation of the female body on its head, presenting an alterantive gaze using the male. The subtlety of the work, almost audacious, captivates the viewer, reconfiguring uncomfortable stereotypes in order to critique them, challenging the audience to question the realities of gender expectations and the very act of looking. Misha Japanwala’s work takes from the series she began in her Thesis, subsuming the stories of women, in this particular case the stories of Jyoti and Anila into her artwork, two of the women whose hands she cast to create her jewelry pieces.The pieces allude to confinement and the threat of violence, but are also sensual and remain open to interpretation. Zeerak Ahmed’s Passage Calls is a sound sculpture that merges auralising with visualising, creating a sculpture that is housed in the body, interpreted through sound and then reconfigured into a physical drawing of wood and steel whose severity is in stark visual contrast to the form of sounds that instruct it. Sara Mahmood’s Still Hanging is a haunting installation that is biomorphic and whose materiality and low installation height allude to violence and the loss of something human and innocent.

From the diverse nature of the work, it is clear that it was important to Zafar that his participants had a certain level of freedom to create work that they felt strongly about, even if it meant that this would create a challenging show to install and bring together. In the installation, great pains have been taken to direct light and align shadows, making sure that sounds and visuals do not interfere, but in fact compliment each other. Interesting works included Aroosa Rana’s two channel video Probability and Predictability that very intelligently commented on gender roles and was accessible in its media and imagery, Zara Mahmood whose digital prints were ethereal manifestations of time and change, and Sadaf Naeem whose two dimensional work successfully created the depth of an indoor and outdoor space as representations of the feelings that are inward and outward, surrounding the lives and expectations of women in south asian culture. Shahana Munawar’s fiber glass and bronze works on the heart were striking displays that conveyed through a lifeless object the depth and power residing within the organ and its influence over the individual. Sheema Khan’s installation was an accumulation of gestures that extends into objects and a painting of the scene, creating a detailed sensorial environment that negated and emphasised the role of the artist, where as Karen Frank’s work, made of polythene bags, playfully conveyed the suffocation and impact of public space.

While Microcosm III does call into question the paucity of shows by just women artists, it was also very much about the art itself- real, sensitive, diverse and highly impactful. Rare is the show curated so meticulously that it can inspire and engage such wide audiences and present a kind of survey that is intelligent and unrelenting.