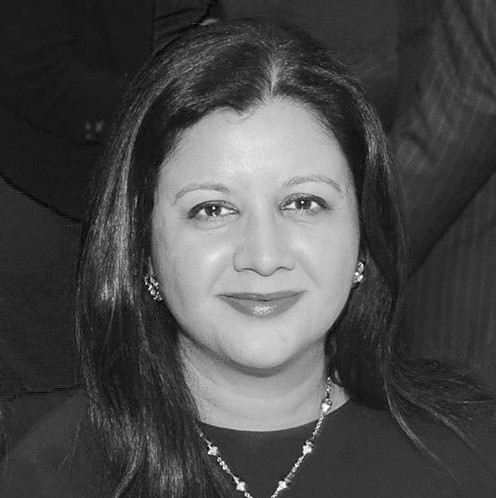 Amna Naqvi is the Founder and Director of the AAN Foundation and AAN Gandhara Art Space as well as the Owner of the twice champion Pakistan Super League cricket team Islamabad United. Together with her husband, they are both leaders in the fields of finance, art and sport. They also own the AAN Collection, which is believed to be the largest and the most acclaimed collection of Pakistani modern and contemporary art. The Collection has been exhibited and published extensively in over fifty global institutions. Her Art Space has set standards in exhibition making by introducing museum quality longer duration exhibitions among private institutions and museums in the country as well as internationally. AAN Gandhara has been a leader in exhibiting new media and seminal exhibitions which include film, technology and in-situ installations, public programming and art publication since its inception.

As our guest editor she speaks about immersive art experiences in the global as well as the local context.

While in Milan and on a visit to the Prada Foundation in the summer of 2017, I came across a work of art which was so far ahead in both technique and narrative quality that it left me utterly speechless (and let me tell you, that is a difficult feat). When I had been exchanging emails with the curators, they said that they would arrange a special visit to view ‘Carne Y Arena’ (Flesh & Sand) a film by the critically acclaimed Academy Award winning director Alejandro Inaritu(The Revenant). The viewings were sold out, but I was fortunate enough to experience it, thanks to the wonderful curators.

It is a solo experience and individuals were asked to take their shoes off and wait in a cold room and the then walk into a huge space with hot sand beneath their bare feet. In the space I was fitted with a VR head set and my journey began. In the words of the Prada Foundation “Based on true accounts, the superficial lines between subject and bystander are blurred and bound together, allowing individuals to walk in a vast space and thoroughly live a fragment of the refugees personal journeys. Carne y Arena employs the highest never before used virtual technology to create a large multi-narrative light space with human characters”. Suffice to say that I was so overwhelmed by the narrative at a certain point that I sat down on to the hot sand.

Critics can remark that the use of VR verges on the point of too much reliance on technology, but in the hands of a story teller like Inaritu, it was both poetic and authentic. Inaritu went on to receive a Special Achievement Academy Award, for this work in 2018.

Moving on, the artist collective Team Lab’s digital work can be viewed at the Mori Art Building in Tokyo. They use algorithms to generate the images for their light and sound installations. They are breaking boundaries in a whole other manner. Often times the artwork is transformed by underlying algorithmic programming due to the movement of the audience. Another point to note is that the installations are not confined to buildings and move out of the confines of a museum to outdoor spaces with ease, as I experienced at the roof garden of Ginza Six in Tokyo in 2018. Team Lab was showing a light and sound installation titled ‘Resonating Trees’ on the roof garden. To create an immaterial work in the heart of Tokyo’s consumer hub raised potent questions of consumption and the environment without the use of a single object.

As I was working on this essay, I came across the news in Art News magazine that the contemporary artist Ai Wei Wei is so done with museums and museum shows and he will now be focusing on art based films and has three in production currently.

There are two questions to be asked thus. What of the ‘object’ and the ‘museum’? If the question all boils down to experience, do we need both or any to employ for ‘art making’ or ‘exhibition making’?

Closer to home, one can research and observe artists such as Shahzia Sikander, Imran Qureshi and Aisha Khalid who have been working with film and installation since the late 90’s which I have been fortunate enough to witness.

Shahzia Sikander created a number of films and installations including her video installation titled ‘SpiNN’ in 2003 and ‘Unseen’ at Doris Duke Foundation’s Shangri-La in Hawaii in 2012. Her magnum opus though is ‘Parallax’ which is a seventy two feet, three channel-single image animation composed of hundreds of hand painting drawings which is a classically immersive film experience and was created for the Sharjah Biennial in 2013 and has been shown at the Guggenheim Museum Bilbao, MAXXI Museum Rome amongst others.

Aisha Khalid’s video installation titled ‘Conversation’ was created while at Residency at the Rijksakademie, Amsterdam in 2001, while Imran Qureshi’s installations at the Singapore Biennial, 2006 and the Metropolitan Museum of Art in 2013 are a testament to an immersive experience.

These artists though continue to create object based art but practice their engagement and experimentation with film and in-situ installations with zeal. It is interesting to note, that the artists who were trained at the miniature painting department of the National College of Art were willing to experiment with other mediums very early in their art practice. The reason could be that to break the ‘jadwal’ or the border in the training for miniature painting is such an act of rebellion, that to break further boundaries with any medium as well as subject was that much easier.

Rashid Rana on the other hand used ‘real time’ to create his multi -media installations. At his collateral exhibition at the Venice Biennial in 2015 ‘My East Is Your West’ he manipulated the viewer in real time in Venice with his work titled ‘I do not always feel immaterial’ and it was a very disorienting art work to experience for the viewers. I recall constantly moving in and out of the first room to figure it out. Moving on, the viewers in Lahore and Venice were confronted with each other in real time and unknowingly morphed into each other’s audience in the second installation titled ‘The Viewing, The Viewer and The Viewed’. Or the question to be pondered is that were the respective audiences in different times as weren’t those in Lahore in the future, while those in Venice in the past? As is increasingly obvious with Rana’s artwork, notions of ways of seeing, time and space all collide in his practice.

Then there are artists such as Bani Abidi and Basir Mehmood who have chosen film as their primary modes of storytelling, while Adeel Uz Zafar and Abdullah Syed have experimented with sound installations. Khadim Ali chose to realise monumental murals for the ‘National Exhibition’ at the Museum of Contemporary Art, Sydney. While Fazal Rizvi is experimenting with both sound as well as the notions of using the landscape or in this case sea-scape as a mode for story telling for his work ‘Rooms Afloat’ rather than the confines of a ‘walls/museum’. As for artists such as Yaminay Chaudhri, Shahana Rajani and Zahra Malkani film and technology and are the central focus of their practice.

Publishing projects is another area where art is overlapping with artistic practice. This is not only in the form of artist books such as ‘The Straight Path’ by Imran Qureshi in 2009 but independent publishing projects such as Scroll, which was a collaboration between the AAN Foundation and the curator Aziz Sohail in 2015 and is now being exhibited in various museums with Zeitz Museum of Contemporary Art in Capetown South Africa as its first stop in 2017.

The lines between education, publishing, research, film, architecture, technology, design and art will be so porous that these will inhabit each other’s spaces even further and artists who have developed interdisciplinary skills will be more adept at inhabiting any or all of these worlds in the future, be it with creating ‘objects’ or immersive experiences. As for ‘the museum’ and if it is to remain relevant then in computer- game speak, it will also have to be an amorphous being which will have to manifest in many avatars, forms and spaces.