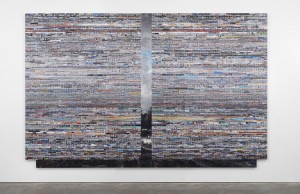 “Men seldom moved their bodies; all unrest was concentrated in the soul.”

In The Machine Stops, an eerily prophetic story first published in 1909, English writer E. M. Forster imagines a future in which humans live underground and rely entirely on “the Machine” for sustenance, comfort, entertainment and information. Their subterranean lives are controlled and perfected, down to the last detail, by the Machine, to which they are linked through buttons and knobs and switches present in their small, hexagonal rooms. They know “several thousand people”, though meeting or even seeing someone in the flesh is a rare occurrence, bringing on a kind of panic. They attend and deliver lectures from the snugness of their cells. They are able to turn on something known as the “isolation-switch” when they wish to give their time exclusively to another party and be undisturbed by “accumulations” that are rather like the “notifications” of today. They talk to and see each other through round, luminous, hand-held plates. And very few of them travel. There is no need to, as “the earth [is] exactly alike all over.”

It is easy to locate in Forster’s terrifying and tender story the blueprint of the Internet age. The internet is the Machine from the story that has come to govern our lives, our interactions, our collective experience of life, surely but not in any way slowly. In fact, it is probably the speed and near-absoluteness with which the internet has taken over our lives that makes us regard it often in a villainous light. As if it caught us unawares. As if no other technological innovation ever left us so starry-eyed, perplexed, and acquiescent before. But if one thinks about it, it is not so much the speed of its conquest as it is the internet’s assimilation of other technologies of the modern era that makes it such a monumental force.

In a memorable passage in The Work of Art in the Age of Mechanical Reproduction, Walter Benjamin recounts the effects of technological progress on art and its experience. He recounts how lithography superseded wood and copperplate engraving, and “made it possible for graphic art to accompany everyday life with pictures.” Then he explains how lithography was itself superseded by photography, through which “the hand was for the first time relieved of the principal artistic responsibilities”. These responsibilities now came to rest with the eye, and since the eye perceives faster than the hand can draw, “the process of pictorial reproduction was so enormously speeded up that it was able to keep pace with speech.” The internet encapsulates these swift, steady changes. It combines the ubiquity of the reproducible image with the indelible pervasiveness of printed text and tops them with the quickness of thought rendered as speech. The characteristics that define it – abundance, indiscriminateness, speed – offer a democratisation of information and, in a sense, of the world.

This, of course, has changed how we view, experience, and discuss art – among other things. Art has become enormously accessible. Museums have opened up their collections to countless, nameless viewers who drift in and out soundlessly. Information about artists and their works is a few rapidly typed words away. Artists have established perennially open studios on platforms like Instagram. Collectors bid and buy online. Galleries compete, curators curate online. It is madness, and excess, and soft, sensory murder. We partake in it, but our first impulse, when trying to describe how the internet has changed our experience of art, is to clutch at terms like “second-hand”, “mediated”, “virtual”, “vestigial”. We might say, looking at an astonishingly sharp image of a famous artwork, that it feels almost as if we were looking at the real thing. We realise that it is not the real thing, but we have made peace with the “almost” aspect of it. “Something ‘good enough’ had long since been accepted by our race,” writes Forster in his story, predicting the internet with increasing accuracy.

In the 19th century, French author Stendhal wrote of the Florence Syndrome – a condition of being overwhelmed by artworks of great and sublime beauty. An 18th-century drawing by Henry Fuseli, titled The Artist’s Despair Before the Grandeur of Ancient Ruins, shows a figure weeping next to the humungous fragments – a hand and a foot – of the ancient Colossus of Constantine. The artist, his hand covering his face, is the very embodiment of melancholic surrender. Can art produce the same emotions when it is experienced through the rectilinear composure of a screen? Mark Rothko talked of viewers breaking down in front of his paintings. He likened viewing his paintings to a religious experience. Can his colours really swim like numinous rectangles on a brazenly lit digital window? Perhaps it comes down to the loss of what, in Walter Benjamin’s terms, can be called the “aura” of an artwork. Or, to go back to The Machine Stops, the loss of the “imponderable bloom” of a deep and true human connection –

“He broke off [fell silent], and she fancied that he looked sad. She could not be sure, for the Machine did not transmit nuances of expression. It only gave a general idea of people – an idea that was good enough for all practical purposes…The imponderable bloom, declared by a discredited philosophy to be the actual essence of intercourse, was rightly ignored by the Machine, just as the imponderable bloom of the grape was ignored by the manufacturers of artificial fruit.”

But just because the circumstances in which we experience art have changed does not mean that this new mode of experiencing art is any less authentic. It is authentic for a generation that has grown up with the knowledge of, and full access to, the internet’s far reaches. The internet allows immediate sharing, linking, disseminating, and a lot of art is about just that now – re-posting, re-blogging, re-tweeting. Artists working today make art with equal forethought as to real, physical exhibition spaces as well as the virtual space in which their work can be promoted and shared. And increased opportunities for the selection and exhibition of artworks through competitions and open calls also usually mean that the works will be judged and selected on the basis of their digital copies, the actual works being procured only upon selection. The predominance of the virtual copy is implicit in contemporary art-related activities.

The internet has also influenced the content of art. Artists like Richard Prince have turned to image-sharing apps like Instagram for inspiration – or rather, appropriation. From rummaging for images in the annals of advertisement and entertainment, Prince has moved on to scouring for them on other people’s Instagram profiles. Meanwhile, Cindy Sherman has turned to selfie-editing, “augmented reality” apps like Facetune, Perfect365, and YouCam Makeup for an ongoing series of portraits that she dutifully shares on her Instagram profile. The options these apps offer to an artist like Sherman, a veteran of disguise, are limitless – as Sherman’s Instagram profile now proves. It teems with deliriously tweaked images of herself, through which she launches dozens of new characters. Rashid Rana, in works from his Language Series, evokes glitch images or glitches in “streaming” data.

Discourse on art has undergone a transformation, too. Debates are waged in the comment sections under social media posts. The nature of criticism has changed, with new voices – millennial voices – like the irreverently named The White Pube reviewing exhibitions on personal websites, Instagram, and Twitter using a mix of vernacular and emojis. Popular art critics like Jerry Saltz pose frequent questions about the artistic process or common problems faced by the global arts community to encourage any artist with a smartphone to engage in conversations that can bring together insights as point-blank (and lazy) as “awful work” and more erudite comparisons and arguments.

But apropos of all of these shifts in our relationship with art, what is most intriguing is the control the internet affords us. In an essay he wrote in 1928, titled The Conquest of Ubiquity, Paul Valéry mused: “Just as water, gas and electric power come to us from afar and enter our homes with almost no effort on our part, there serving our needs, so we shall be supplied with pictures or sound sequences that, at the touch of a button, almost a wave of the hand, arrive and likewise depart.” What this musing anticipates is not just the unrestricted supply to us of pictures and sound and information but also our control over it, our power to increase, decrease, or even shut off that supply, our power to sift through and choose from it, our power to do with it as we wish (with a few caveats). In a conversation with Hans Ulrich Obrist, recorded in Obrist’s Lives of the Artists, Lives of the Architects, David Hockney, discussing the internet and mass-digitisation of newspapers and magazines, remarks that “[in] a way, on the iPad or the computer, the individual becomes an editor, you start choosing.” Further on in the same conversation, Obrist adds, “All authorities are being challenged. With the internet everyone can be a museum curator…”

Like the media technologies that preceded it, such as print, photography, radio, and television, the internet grants new forms of power to the individual and the society at large. And, again, much like earlier technologies, it can be – and is – used for suppression and propaganda as well as resistance and subversion. But compared to the earlier technologies, which, despite the wonders they did for mass communication and freedom of expression, were still susceptible to occasional totalitarian control, the internet remains astoundingly democratic and expansive. And in many ways it has done more for art than it has for other human concerns: it has offered us a most exhaustive apparatus for re-inventing ourselves.

Benjamin, Walter and J. A. Underwood. The Work of Art in the Age of Mechanical Reproduction. London: Penguin Books, 2008.