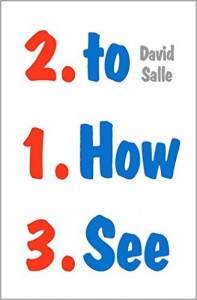 How To See And Write

“If John Berger’s Way of Seeing is a classic of art criticism, looking at the ‘what’ of art, then David Salle’s How to See is the artist’s reply” thus introduces Salman Rushdie, the recently published (2016) collection of articles and reviews by one of the leading artist of our times. David Salle is recognized and respected for his distinct voice and individual style, in which he combines images on a canvas, so the superimposed visuals (drawn, thickly painted, inserted into surface) become analogous to the structure of our thoughts, which are never single, and always overlapped, mixed and intermingled.

However, on the other hand the writing of David Salle is clear, crisp and controlled. His essays, previously appearing in a number of magazines such as Town & Country, Art News, Artforum, Interview and The Paris Review, are arranged in four parts in this book. Separated on different themes, these pieces offer insightful reflections on some of the most important artists, such as Alex Katz, Robert Gober, Albert Oehlen, Roy Lichtenstein, Jeff Koons, Vito Acconci, Frank Stella and several others. The collection also includes texts on artists from the age of Modernism and even before, like Marsden Hartley, Philip Guston, Clyfford Still, Andre Derain, Courbet, Picabia, and Piero Della Francesca.

The impressive list of entries, would not have been complete without John Baldessari, Salle’s teacher at the California Institute of Art in the early 70’s. Three articles on the conceptual artist are included in different sections of the book, in which David Salle provides his opinion on art in general while writing about his mentor. Especially in the last essay on him, Questions without Answers for John Baldessari, Salle poses multiple queries for “the tallest serious artist in the world”. Of course, without replies, because these issues reveal Salle’s self as mirrored through his mentor. Concerns such as “How important is the intention in art? What did you do that was new?”, “Who is smarter: a painter of average intelligence or a really smart dog?”, and “Do you believe in the idea of a masterpiece, and what qualities must a work have to qualify as one?”

In the same essay Salle ends with this line, “Which is better for an artist: to be loved or feared?” A comment that also connects to critics, because they are always in the limbo or purgatory between appreciated or despised. Usually art critics are feared more than loved, only because they have the – minor – ability to make or unmake a practitioner. In many instances their opinions and views are farfetched, only because they lack the initial and essential – first-hand – knowledge of art making. They operate as viewers, even though the informed ones. Only when an artist who takes up the role of a critic can relate to creative process of artists; and in Pakistan there have been a number of artists who wrote regularly on art, either in books, catalogues, journals or newspapers. A. R. Nagori, Ijaz ul Hassan, Salima Hashmi, Durriya Kazi and Quddus Mirza are a few names in this regard.

The artist writing on art, has a different approach, something evident in the book How to See, because when Salle comments upon the work of another artist – his contemporary in most cases, his tone is not dry and academic, but lively and enticing; for example “Jack Goldstein is the kind of artist who thinks he has to be the prickliest cactus in the desert”. And from his introduction “William de Kooning, who, in addition to being de Kooning, was a genius with the English language, once likened a painting by Larry Rivers to ‘pressing your face in wet grass’”.

Yet the analysis is deep, thought provoking and thorough, so a reader gets to the scenario of contemporary art. Talking about the main issues in the work of artists who are addressing notions as varied as social and cultural existence, relevance in art world and formal experiments. While discussing artists, their exhibitions and art teaching concerns, David Salle presents his critical point with an eloquence that never leaves a reader confused, bored or disinterested. Occasionally you come across small nuggets like “A style can be judged successful if it influences the work of other artists” or “The line in art between the good, the accomplished, and the popular has been more or less erased in the national mind”.

Although Salle is a practicing, accomplished and celebrated artist, yet his decision to take up writing on other creative personalities is crucial, because instead of praising or rejecting an artist, he, in these essays, helps a reader to turn into a viewer, rather a critic; because he analyses art, artists and artistic process and shares it with the reader. Having said that he is also aware of the limitation and ill-legitimacy of art criticism, when he constructs an imaginary situation in which “Two critics of opposing viewpoints, discussing a controversial painter:

“1st Critic: His work is like a car with the engine taken out, but it runs anyway.

“2nd Critic: That’s because people like you pick it up and carry it.”!