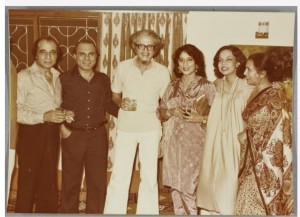 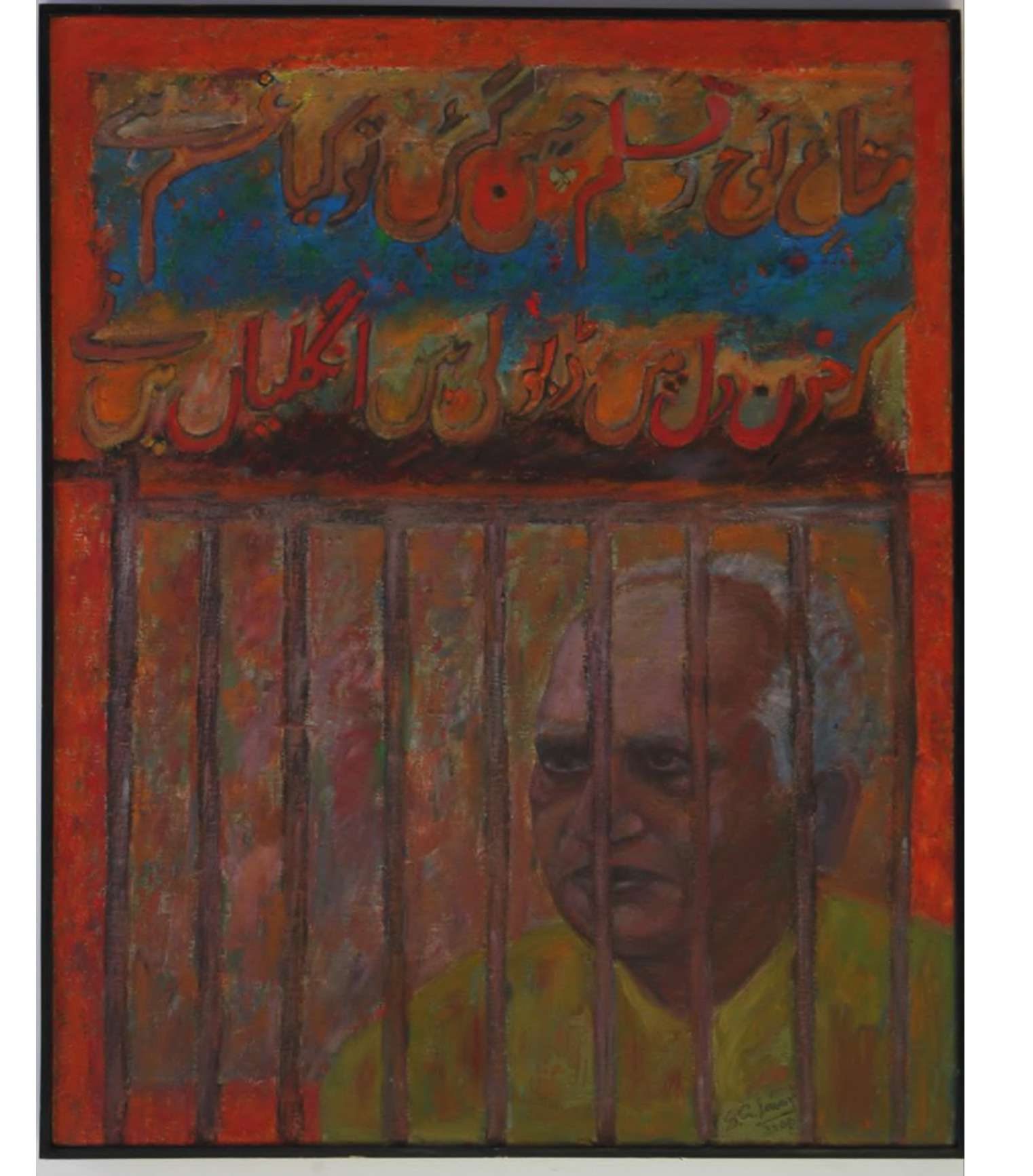 The Rangoonwala Foundation London presented its first ever exhibition at the Asia House in London under the artistic direction of Nour Aslam. According to Aslam, the exhibition hints at Pakistan’s political landscape and its effects on artistic productions during the Zia era, the under-representation of women in the arts covertly commented upon via the title of the show, but primarily and most significantly it explores Wahab Jaffer’s role as a collector and patron of the arts. The visuals are supplemented by Jaffer’s personal videos and interviews that shed light on his methods of supporting artists.

Aslam iterated how important it is to cultivate a relationship between the artist and collector, a relationship that is apparently lacking today. This serves as the main assertion of Father Figure. However, this is debatable. As important as it is for artists to be congenial towards art collectors and audiences alike, cultivating a relationship with the collector seems to focus on the commercial aspect of making art and may inhibit true artistic expression. At the end of the day, it would seem that the exhibition is a showcase and perhaps, a celebration of Jaffer’s collection, but that is the extent of the curatorial premise of Father Figure.

Wahab Jaffer’s collection – now part of the Rangoonwala Foundation – is vast. The forty-one wall mounted pieces included in Father Figure, are only a fraction of the complete collection, and yet the exhibition wasn’t streamlined along any particular conceptual trajectory. It was a mix of calligraphy, portraiture, landscape, abstract art and some-what sculptural pieces such as Shahid Sajjad’s Untitled bronze piece and Riffat Alvi’s Roots composed of earth on board. That being said, there are some exceptional artworks in this collection that I hope to see in future exhibitions that are more discernible and curated in a conceptually perceptive manner.

Almost every Modern Pakistani artist is included in this showcase, each of whom could individually have a complete exhibition curated around just their work alone. Hence it was an excessively difficult task to narrow down the works and select just a few pieces to elaborate on for the sake of this article.

Even though Jaffer’s mentorship and favour was visibly extended to male artists, his collection is not completely biased and represents a few notable female artists. Salima Hashmi is one of them. Hashmi’s mixed media piece The Life and times of… immediately catches one’s eye, placed amidst larger and bolder art works, this delicate drawing with Urdu and English newspaper clippings collaged on a neutral surface, flanked on one side with a sensual female nude seen from behind, is sensitive and attractive despite its modest size and minimal use of colour, pulling the viewer in, much like an intricate miniature painting does. This drawing reflects on the politics of the time, bringing into sharp focus the difficulties faced by artists and other progressives during the Zia-ul-Haq regime.

Where Salima Hashmi’s drawing pulls the viewer in, Bashir Mirza’s oil painting titled Head in Ochre from The Lonely Girl Series, roots the viewer into the ground in front of it. The painting is exactly what the title states: the canvas is almost entirely covered with a portrait; a lone larger-than-life face of a dark-skinned girl, a slightly ajar mouth painted a neon peachy-orange, large blank blue eyes wide open, with a shadow across the face and an ochre head-covering seemingly stagnant at a point where it is neither falling off nor on the head, stares straight at the audience. The painting is bold and unusual, almost like an illustration, stark in its application of colour, painted in a fashion that is far from realistic, yet captivating. This painting is stunning in its simplicity.

The third and final piece for this review is surprisingly contemporary with a vintage feel to it. Writing an artist statement is sometimes the most grueling part of being an artist. Some works are beyond words and explanations just limit them. However, the brilliant Ahmed Pervez took the mundane job of writing a statement to the next level by transforming the statement itself into a work of art in the piece titled Illustrated Statement. On the left of the work is a concise text explaining Pervez’s sentiments and on the right is a bold and bright abstract design in Gouache, with a border running from the left edge onto the bottom of the horizontal piece. Text in art is always fascinating, but such coherent musings lend the work a contemporary feel, where the text is not assimilated into the art, instead it stands on its own, as an inspiration.

Father Figure, despite its curatorial drawbacks is an important show, especially for the upcoming crop of Pakistani artists who haven’t experienced the politics of the 70’s and 80’s. Such surveys are essential in understanding the development of Pakistani art history as well as representing it. Having attended art school in Pakistan, it is a sad reality that even though western art history is taught in theory classes, contemporary art is kept up with in studio sessions, Pakistan’s art-history is rarely part of the course work. There is no focus on the development of art and the various stages of evolution it has seen since Pakistan’s conception in 1947. Hopefully, this showcase will assert the urgent need to study Pakistani Modern Masters alongside Western Art and contemporary artists.