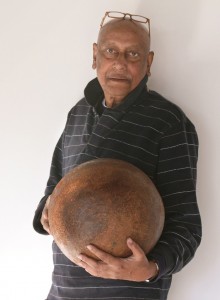 Imran Mir was a unique person and painter in the world of Pakistani art. Not many artists in our surroundings have opted for abstract imagery, but if some did, their work mainly depicts a tendency for loosely applied brush strokes and randomly constructed surfaces. Imran Mir, on the other hand, preferred a structure and geometry in his art.
This order, visible in his canvases, was found in his life too. An aesthete to the core, Mir was born in 1950 in Karachi, and graduated from the Central Institute of Arts and Crafts, Karachi in 1971, before earning a Mater’s Degree in Communication Design from Ontario College of Art, Toronto in 1976. Along with working as a painter, Imran Mir was the CEO of Circuit, the advertising agency. In his life both aspects of creativity merged and produced a refined, sophisticated and unique aesthetic sense that distinguished him as a person and made his work extraordinary.
It was the act of putting different elements in an order that was a remarkable feature of his creativity. Whenever someone visited him in his house (with his studio on the second floor) in Karachi, the visitor was mesmerised and impressed by the way house reflected Mir’s taste in colour, his choice in minimal forms and his preference for a balance of traditional and contemporary sensibilities.
But more than his work in graphic design or creating a beautiful space for his living, and his loving interaction with his fellow artists (always inviting them to his place and offering with his great hospitality) actually his approach towards art made him as one of the most original artists of our times. His aim to analyse and examine formal concerns on a cognitive scheme, his ability to use colour both on cerebral and emotive levels and his eagerness to explore new ideas were a few features of his pictorial vocabulary. The eight works series titled Paper on Modern Art from 1980s indicate how the artist was inquiring the structure of the image, and linking it to Greek philosophy as well as to the art of the sublime from the 1940s and 1950s American Abstract Expressionism.
An artist is not complete without his ancestors or admirers. Imran Mir was inspired by Zahoor ul Akhlaq and like that modernist, attempted to create an imagery that dealt with formal issues on more than one sphere. The painterly surfaces of Akhlaq were replaced by hard edged areas in Mir’s work, but both artists – and contemporaries – were seeking the primordial motifs in painting, but their search was not merely a technical matter, because it included a painter’s pursuit to discover the unknown. Once talking about this, Zahoor ul Akhlaq described the artist’s work to establish a dialogue with painting (rather then insisting on a monologue or dictation). In Imran Mir’s art the presence of this exchange between a painter’s mind and his material – or between thought and sensation – was evident. In addition to exploring different modes of representation of space, his paintings are a means to enjoy the surfaces too. Hence a blend between facts and fiction, concept and emotion was always present in his work.
This blend or balance was part of his personality too, because with all his polite manner and formality one could sense the warmth of heart and strength of feeling that he showed to his friends and contemporaries. One of his mentors, teacher and friend Rashid Arshed, comments on this aspect, which is translated in his art as well: “I have had the good fortune of seeing Imran grow over a period of more than a quarter of a century from a brilliant student to a master. In his first exhibition at the International Center in New York he relied on the use of flat geometrical shapes and patterns with a few colours. Some of his most striking canvases were even monochromatic. This body of work can be described as minimal in terms of design and colour. This was a significant beginning for Imran because it proved to be the foundation upon which Imran’s subsequent work is based.
“I must qualify my statement by adding that although his later canvases are mathematically more complex and visually more intense, he has not diverged from his love for the geometric form”. This fondness for geometric form was evident in his sculptures too. His constructions were a means of capturing the essence of two-dimensionality in three dimensions. Actually it was his paintings, which provided that sophisticated body of images, which Iqbal Geoffrey (another artist and friend, greatly admired by Imran Mir) describes as pictographs. He elaborates: “The pictographs that Imran instills or stirs are novel and enlightening – not parochial, parasitical nor forget-me-not mementoes of the picturesque. Love, not logic, is his forte, i.e. metaphysical ménage-a-trios of palette, plate and platform. He trucks mobility, and his mode is poignant – pregnant with pragmatism. Never buttering literalism. Nor brandishing liberalism.
“Whenever and wherever line is to be taken for some stretched sojourn, he gives it a welcome uplift. This unsolicited hitch-hiking of and yatra for the traversing line is not common factoring at a time when shortcuts to plagiarism reign the state-of-the art regime (apprehensive of all kinds of paradigm shifting) that – described in few words – actually adds up and amounts to our domestic, claustrophobic artworld”.
These comments of two artists, for whom Imran Mir represented a different class of those artists who are pursuing art not merely as a means of enjoying splashes of colour, but being an intelligent and intellectual activity, are shared by many in Pakistan and outside the country. His reputation as a serious, eminent and profound painter spread beyond borders, and will remain so – and hopefully grow further – after his sad demise on 28th October 2014.