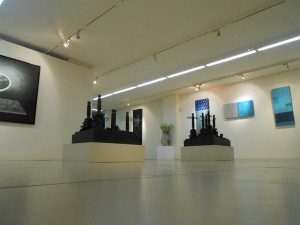 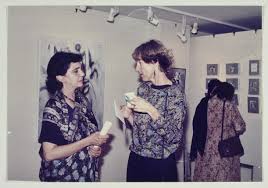 The intimate space in the heart of Clifton, nestled atop the Delawala shopping arcade, is the second home of Chawkandi, which started in 1985 with a much smaller space down below facing the now ever-congested parking area. This was at a time when vehicles were few, streets were safe, children played and pigeons fed in the empty parking, and Shahid Sajjad compared the area to Paris when he brought his foreign friends along. Chawkandi is one of the oldest and most reputed commercial galleries of Pakistan, and shares much of its owner, Zohra Hussain’s characteristics – unpretentious, warm, welcoming and humble with a keen eye for quality and the highest of standards, ethics, sense of pride and authority in the art world.

While Ali Imam set a precedent with his Indus Gallery, which paved the way for Chawkandi Art Gallery, the latter had as much a hand in promoting art in Pakistan, building a clientele and propelling the art world into what it is today. Mrs. Hussain has proved herself a relentless patron of the arts in the country – although her self-effacing attitude will not allow her to accept that claim. There is directness and honesty in the way she talks about her ambitions with the gallery, with no sprinkles of romanticization on her origin story; “there was a need for me to do something. My kids had grown up, and I had a space available downstairs. And I had a lot of artist friends.” She also doesn’t have any qualms about speaking of her monetary motivations, “when people open a gallery they say ‘I want to serve art.’ I never said anything like that. I always said it’s a commercial gallery. A gallery is always commercial; people say ‘I want to promote young artists and I want to serve art,’ and it’s not always true. You open it to make money…” Yet she admits to the importance of idealism and maintaining a good balance, which is central in reaching the high standards that Chawkandi has reached. It then becomes an interplay of a keen eye, instinct, and commercialism and an innate sense of ethics and conscience that becomes the basis for the gallery’s values and its subsequent success. For example, she would never display Iqbal Durrani’s work as he seems to emulate JamiL Naqsh too liberally. On the other hand, Zahoor ul Akhlaq, who was famous at the time for not selling at all, always had a space on her wall. He was difficult to sell but with her he soon became the highest selling artist.

Hussain recalls that she never really faced too many problems when she first opened, and everyone was very welcoming and supportive. She attributes this to, ironically, her lack of knowledge or involvement with the art world. “When you’re from the art world, it’s easy to have a difference of opinion, while I didn’t know anything about the art world.” Her aloofness and detachment from the politics of the art community pulled artists like Zahoor ul Akhlaq, Shahid Sajjad and Jamil Naqsh, who had their differences with Ali Imam, and would never show with him. As a result, Chawkandi was responsible for building the career of many important artists of Pakistani art history, including the promotion and popularization of the neo-miniaturists. “But at that time we maintained a certain ethics. I would never approach his artists without permission. I was very particular about that. And he would do the same. These days you see artists exhibiting with everyone. I wouldn’t say it’s unethical but there used to be a line which is not there anymore.”

Over the years Chawkandi was able to improve upon the gallery structure and its workings laid forth by Ali Imam, and soon other galleries were able to further improve upon her ways. Now there is a saturation of art galleries in the city, yet, much like many artists from her time, Zohra Hussain also yearns for those days when things were quite different. “We had baithaks (informal gatherings), with heated arguments and discussions. The biggest and most intimidating names used to sit in my office everyday – I couldn’t close the gallery!” there is a lack of this ‘community’ and dialogue now, with artists more competitive, more interested in sales and building CVs. Perhaps this is a symptom of the digital age where social media has become sort of a virtual community that has taken the place of galleries. While one might have networked through visits to the gallery and received the latest bit of news, gossip and opportunities, now all this is readily available online where artists can keep in touch and up-to-date without leaving their homes.

I mention this much to Hussain and she agrees that social media has significantly changed the game. “Now it’s more about Facebook and marketing, and how you place yourself, and it’s become like a product,” says her son Haider, who has just joined our conversation and who helps Hussain run the gallery. The importance of social media as a tool and kind of a necessity in recent times is undeniable, however, and he says the gallery is working on making their online presence stronger. Yet, perhaps one of the charms of this gallery is its adherence to its ethical codes of conduct. Even with new galleries opening up each day and a wealth of shows of contemporary art happening each month, Chawkandi still thrives and maintains a certain character in the kind of art it promotes, and a standard for the best artists and best art on the market. Hussain maintains a policy of exclusivity, with only one show per month, even if it means booking shows 3 years in advance. And during the summer holidays, Ramadan and Muharram, the gallery does not hold any exhibitions.

However, with a changing art world it is not just the artists who have changed, but also the buyers; “before they used to buy for the love of art, now it’s more about investment.” As a result, buyers and collectors want to know the background and the career trajectory of the artists; which is why the gallery now mostly deals in well-known, established artists with high prices and international acclaim. Drawing on her wealth of experience, Hussain also is one of the few people who deal in old masters’ works, since they come with their own issues of authentication that most galleries do not want to deal with. “I don’t believe in museum certificates, you can pay and get those,” she says. Instead, she works hard to track down the origins and create a provenance, which helps stake out any weak sources or areas of doubt.. Another method she uses is to give the work exposure to various artists, critics, historians, and collectors for 10-15 days, whereby someone or the other is able to point out characteristics which might cast reasonable doubt.

However, this doesn’t come without its own set of issues, not least of which is the overabundance of fake paintings floating about in the market. Many buy photocopies or prints of paintings unknowingly, while others actually come asking for cheaper fakes. Hussain’s high level of character not only forces her to turn these buyers away, but also to cancel sales worth tens of lakhs should there be even a little possibility of the painting being fake.

The Pakistani art landscape has changed exponentially since Chawkandi was founded, and is still evolving as interest in contemporary art grows. I wonder aloud what this means for Chawkandi: “I think it’s both negative and positive. In a way, I think there are very selective galleries who are doing good work. The rest are selling whatever comes their way. It does create an interest in art but it also has damaging effects. It works both ways.” For an institution like Chawkandi that has painstakingly built its image over more than 30 years, it is not as easy to knock down, and perhaps in this case it only pushes its standards even higher. It is not surprising that Chawkandi has quietly carved out a comfortable place for itself within the future of Pakistani art that it helped build.