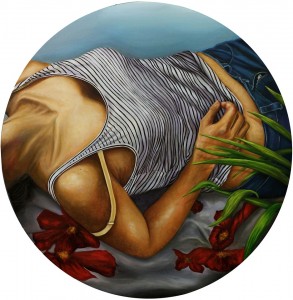 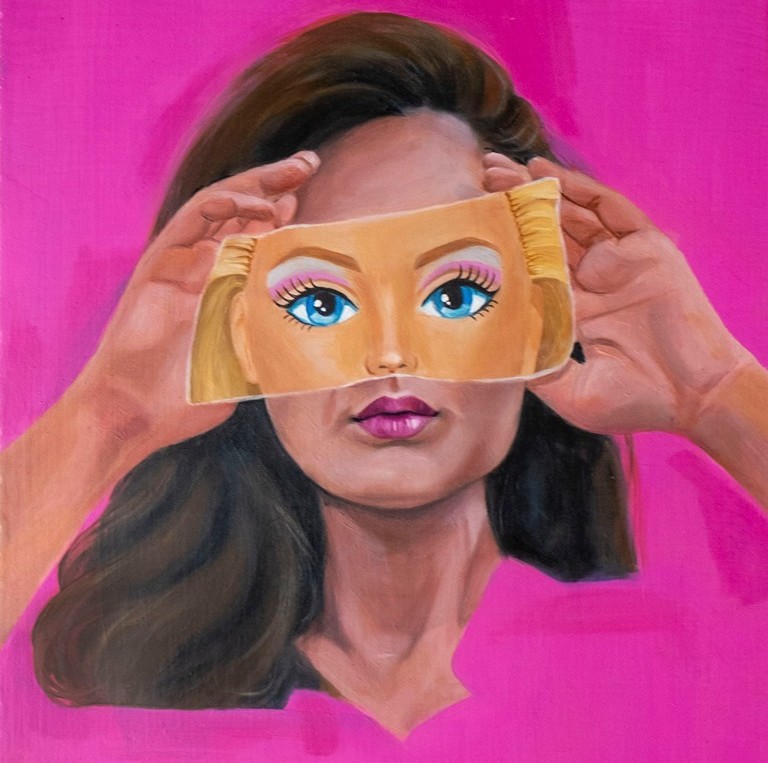 First of the six artists in the exposition was Anusha Ramchand. Ramchand is a fresh graduate from the National College of Arts. She is a distinctive artist with a unique approach towards her work. She creates art that knows no bounds, but merely flows along with her trail of thoughts and ideas. The centric of her work ranges from self-discovery to acknowledging the bitter realities of our society that more than often, pass by unaddressed. Her canvases have more than often proved themselves to be a medium for her to voice out her opinions and views and hence, giving a colorful life to Anusha’s frame of mind. She does not refrain from experimenting different forms of styles, whether it be fibre glass, UV printing or classic acrylic. Each of her pieces tells a different story and revolves around a certain theme. “Every day, Dress Differently” covers the titles of inclusivity and self acceptance. Similarly, “You too?” boldly addresses the taboo and phobia in our society that revolves around the controversial ‘Me Too’ movement, and consequently, in both the cases, giving a voice to the marginalized and oppressed.

The second artist I looked at was Erum Akhtar. She graduated from Punjab University of Art and Design in 2018. Since then, her artwork has been exhibited on different platforms including Alhamra Arts Council and Young Artists Annual Show. Usage of oil paints, and addressing taboos of the society, is her specialty. Her rich and detail-oriented work includes human figures and foliage cleverly inculcated together in one frame. Through her paintings, she has explored various aspects of the human anatomy and their desires. She makes use of oil paints brilliantly mostly on a canvas and richly defines every corner of her work.

Hifza Khan recently graduated from the National College of Arts. Her phenomenally hyper realistic and detail-oriented work usually focuses upon the struggles and atrocities the women have to face growing up in a conservative environment. Her work not only proves itself to be an awakening for our society but also emphasis upon the normalization of the inhumane and barbaric practices such as domestic abuse. Through her art, she fights for the suppressed and helpless, and continues to boldly address the matters, that most people usually face their backs towards. Using oil paints as a medium, she has created various master pieces such as the Acceptance Series that signifies the burden of endless responsibilities and restrictions in a woman’s life.

The forth artist I looked at was Laraib Ahmad, and her work really intrigued me. Ahmad is a fresh graduate from the National College of Art and has already showcased her art in various cities including Karachi and Islamabad. She specializes in bringing enormous canvases to life that range from four feet and above. Her rich and uncanny artwork is inspired by her dreams that consist of impaired beings co-existing. She materializes the extents of her myriad imaginations with the help of her art; capturing them through her paints, making her dreams tangible. Her work is often displayed in art galleries, especially in Islamabad where her studio is also located. Laraib resiliently explores other forms as well including miniature and printmaking.

Maham Nadeem is a graduate from the National College of Arts. Her visual artwork focuses on the stereotypes and beauty standards set by the society for women, and their struggle to overcome them regardless of the hurdles that come in the way. Maham’s work is greatly influenced by the popular culture, media and the society itself. She believes that her work is inspired by and is a reflection of different artists such as Cindy Sherman and Barbara Kruger. Her art has been exhibited on various platforms such as the World Bank Head office in Islamabad and other numerous art galleries. Her artwork is a result of brilliant usage on oil paints on different mediums such as canvases and lasani.

Last but certainly not the least is Zainab Mehmood. In 2017, Mehmood graduated from College of Art and Design, University of Punjab. She is a dedicated individual who has been passionate about art since a young age and has won various prizes in the past. She is settled in Lahore where her work has been exhibited on numerous occasions. Her paintings are based on the Mughal Era that shows the rich culture of the sub-continent and the lifestyle of the royals. She uses oil paints on boards to create her masterpieces. She incorporated a contemporary technique of laser cutting along with her relatively traditional approach towards painting to put a unique twist on the finished work which instantly captures the attention of her audience by giving her work almost an interesting depth, like a 3D look.

Living in Pakistan, we are well-aware of how certain topics are considered to be taboo and ‘shameful’, like any mention of female sexuality/desires, breaking the societal norms of female acceptance, so on and so forth. The artists stand politically and socially informed, and are making great use of the platform they’ve achieved through their own hard work, to voice their concerns about the position of women in our society. In a field which is rather male dominated, these young artists aren’t scared to lose their foothold by putting out ‘sensitive’ material, which might trigger conventional minds. Instead of producing artworks which might be aesthetically pleasant, the artists have made a bold statement by creating carefully threaded and critically thought-of concepts, which are driven from their very own observations, personal lives and are very prevalent to our society. They are great role models for the younger and budding artists, who in this day and age really need to look up to strong female figures in their desired fields, representing their very own country.