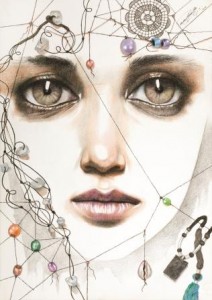 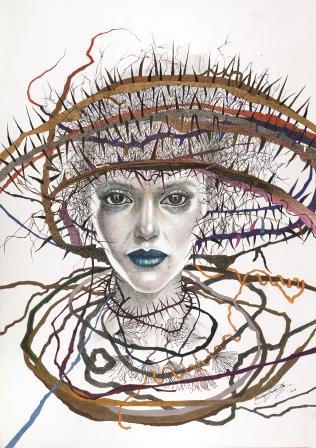 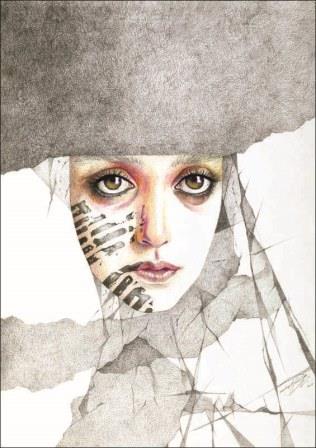 Her most recent solo show at ArtScene gallery titled ‘Alchemy’ is a stunning display of skill and technique. Agha has mastered the art of portraits; each expression draws the viewer in closer to examine the precision of her execution.

She states: “I would like to think of myself as a strong and self-aware woman who stands across the Eastern as well as Western horizon with a desire to reveal ‘open secrets’ through my work.”

Interestingly most of Aghas portraits on display show case a female face- wide eyes and full lips. Each face displays a sense of lingering innocence mixed with an undertone of steely determination. The viewer is welcome to read into the faces placed before them and try and unearth the stories behind each. The faces are in fact a puzzle, a reflection of one’s self and what one chooses to see and build an association with.

The portraits feature splatters of color, some with ornate head gear of what looks like feathers, in others the use of flora and cloth are apparent. A face lies between cracks with what looks like tread marks on its cheeks. Agha explains her work in her artists’ statement “The struggle to unearth, expose, conceal and then reveal again seems to be at the core of my present work. Paradoxes and ambiguities come to the forefront, forcing me to confront sometimes my true self and at other times my metaphorical self. In my abstractions and realities, I am never one single person – I am many. The self I have never encountered before faces me; I do not recognize it, yet I know it to be me.”

Each mark represents a story, the journey of one’s self, viewed through the eyes of many. The works bring to mind a quote by Edgar Degas “A painting requires a little mystery, some vagueness, and some fantasy. When you always make your meaning perfectly plain you end up boring people”. Aghas works seem to encompass the nuances of mystery, teetering on the edge of familiarity and wonder.

A face encased in roots and thorns is vaguely reminiscent of Frida Khalo’s self-portrait in 1940 ‘Thorn necklace and Hummingbird’. The portrait much like Frida’s engages and confronts the viewer.  The roots may denote many possibilities- family ties, fertility and so forth.

What proves to the most haunting element of Aghas works are the eyes in her portraits as if each has a secret to tell. A façade which hides many untold narratives. Agha paints a series of women wearing head scarves. A portrait of a woman encased in a bright orange cover, the color so sharp one is instantly reminded of fire, creating an interesting juxtaposition of theories for the viewer to investigate.

Agha’s works are an amalgamation of aesthetics and ambiguity driven by the freedom of artistic exploration.

One Response to Alchemy