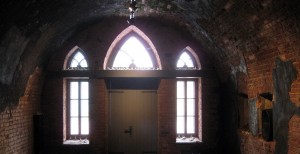 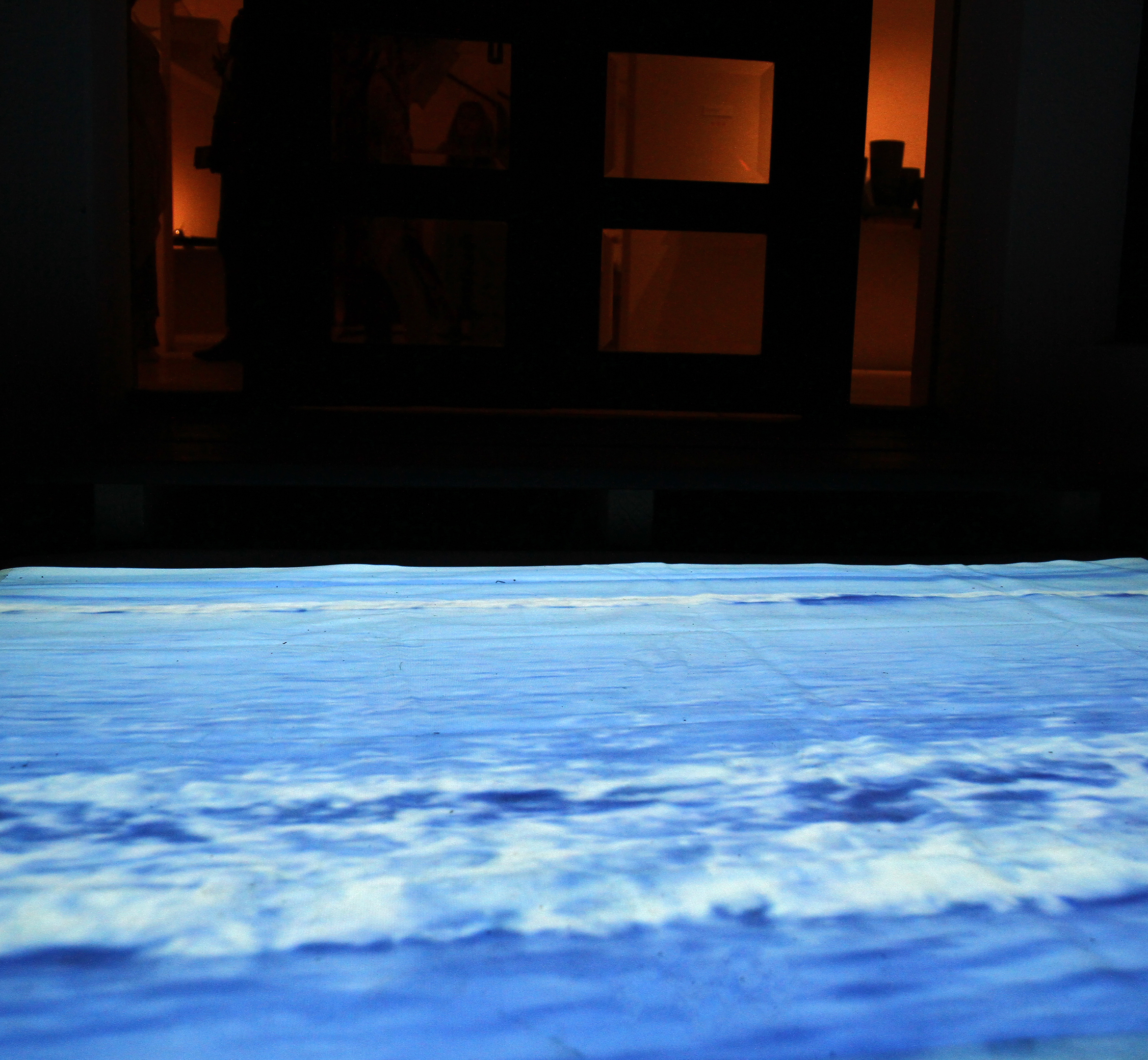 An hour with Sadia Salim

When I think of ceramics, Sadia Salim’s name comes pretty instantaneously to my mind. Salim speaks from a position of vast experience, having undertaken extensive ceramic research in Pakistan and teaching at the ceramics studio of the Indus Valley School of Art and Architecture, Karachi since 1994. However, while the both of us were looking through her previous bodies of work, she is also multi-disciplinary and speaks about how the hybrid fields of study and research influence her perspective of art in the 21st century. The approach that she has to her practice has a nimbleness to it, seasoned with rigor and exploration. Additionally, as a former student of hers, she’s a refreshing change from most teachers who try to offer a tidy package of material to complete a course. Rather than studying underneath her, one finds themselves studying and exploring with her, sharing visual interpretations of art and its’ subsequent investigations.

Salim was in the first batch of Ceramics’ majors at the Indus Valley School of Art and Architecture (IVS), graduating in 1994. Salim looks back and shares that at the time, although the ceramics course was under the Design Department, it was inherently more Fine Art; with teachers such as Mrs Nayyer Jamil, David Alesworth and other ceramic artists who were steered into the crafting of ceramics by teaching throwing and hand-building, she alongside her fellow classmates focused on developing a practice as an artist.

Despite having strong roots with traditional techniques, ceramics has curiously dipped below the radar of internationally recognized Pakistani art practices. Salim points out that many artists simply don’t have the access to a ceramics studio or the tools required to experiment and sustain continuous work in this field. In Salim’s own words, ‘Behind every body of work in ceramics there’s a struggle of research and trial and error… If you work in Pakistan, you have to know how to make the required glazes, clays and additional elements which are needed. We don’t have stores where artists can go and buy readymade materials. This makes a difference – especially for beginners because it can be discouraging.  Ceramics requires space, a certain set of equipment – it can be very expensive and most of all, it requires a lot of patience and understanding of your material. That’s why many students aren’t practicing after graduating because of the unavailability of facilities or having little access to the technicalities.’

With a considerable amount of adversaries ahead of a young Pakistani ceramic artist, she discusses how it took her more than three years after graduating to find an opportunity to create work for an exhibition. Riffat Alvi of VM Art Gallery had curated ‘Language of Flames’ in 1998 bringing together 5 ceramic artists which was well received by both art critics and the general viewers. As there weren’t opportunities like there are today for fresh graduates or many galleries, Salim found the show to be very encouraging, especially after receiving positive reviews by eminent figures such as Dr. Akbar Naqvi and Marjorie Hussain.

Since the past 25 years for her own research and development, Salim has travelled to interior Sindh and the surrounding regions quite frequently – such as Nasserpur, Hala, Multan and archaeological sites of Makli. Having researched on the tools, equipments and materials used during the Indus Valley civilization for her own dissertation while she was a student, Salim elaborates that a Kashigar is an individual who specializes in traditional glazed forms, tiles and architectural ceramics whereas a Kumhar on the other hand makes matkay (unglazzed terracotta products, such as vessel forms). Salim describes that the craft is taught and carried down to the men in the family to keep it within the lineage rather than teaching it to women who will leave the family once married. Much of the techniques and tools utilised by Kumhars today are either identical or similar to those used by potters in the Indus Valley civilization. An example to consider could be, Pakistani ceramist Ghulam Hyder who has studied at the The Prince’s School of Traditional Arts, UK, for instance learned his practice from his mother’s brother who was the acclaimed kashigar Muhammad Sadiq.

She elaborates on how the latest restoration projects in Makli and Thatta are susceptible to criticism as the craft has deteriorated considerably from the laying of the tiles to the  replication of design. Salim emphasizes that it is also important to recognize the cuts which are taken from the craftsmen’s salary to implement the restoration projects. ‘If they don’t get compensated for their work, it’s just not feasible to put that amount of labour into the task.’ She once again uses the example of kashigar, Muhammad Sadiq who once said that although he had the knowledge and skill of replicating intricate forms, he was not going to utilize his resources unless he was paid for that degree of effort.

Salim has a vibrant expanded practice that ranges into multiple materials, deciphering interesting layers of image making as well as paying attention to the usage of techniques.  A resource of immense experience and research in ceramics, Salim was approached by curator Noorjehan Bilgrami who recently directed the new Islamabad Airport’s art project. Salim worked with craftsman Ustaad Wajid and artist Ghulam Hyder to design pieces based on the traditional designs and techniques employed in structures found in Multan, in particular the tomb of Shah Rukn-e-Alam.

The ethnographic framework of craft and artisans is perceived very differently in comparison to contemporary artists with certified degrees and accreditations. Unsure of why individuals who are both capable of preserving and practicing techniques which go back thousands of years are not prioritized or given more attention by art institutes, I asked Salim if she thought that there is any room for collaborative efforts to save or nurture ceramic craftsmen’s livelihoods. ‘Unfortunately, academia is quite divorced from craftsmen and their difficulties. Some departments do introduce their students to intervention, but craft intervention should be treated as a science that needs a deeper analysis.’ Salim further shares her thoughts on this issue and outlines that although curriculums and education cannot stick to learning a singular tradition, perhaps Pakistani educators and practicing artists should develop skill and craft intervention for the better and not just for the sake of introducing it into mainstream contemporary art circles.

This seemed to be a good point to discuss Salim’s further education as a Fulbright scholar graduating in 2012 from the Teachers College, Columbia University. A distinct departure from the ceramic studio I ask if at any point she recalls knowing or wanting to study education. ‘I don’t remember exactly why I applied for an EdM in Education, but I do remember that in 2005 I had joined IVS and was the coordinator for the ceramics department, and as a result I started to sit in with a lot of curriculum and internal meetings that are part of the job. I remember thinking that while we are all trying to improve the education system, there was no one I knew who was truly an educator. Although most of us teaching in art schools are practicing architects, artists or designers it inherently means we as teachers come with our own brand of what we want to do or implement.’

Salim thoroughly enjoyed the change of environment and accredits this shift of circumstances to her venturing into the sculpture studio and audio-visual techniques while in New York, USA. She speaks about a projection of the Hudson River on multiple cardboard boxes which she was able to capture and translate as an image meandering into a sculpture.  It draws a parallel to ‘Digital Beach’, a piece made for an exhibition at Koel Gallery, after her arriving back to the realities of living in Karachi. For Salim this piece was at surface level, not being able to go to the coasts of Sandspit and Hawkesbay in Karachi due to soaring levels of violence. However it is also about the rapid loss of public space in Karachi, due to the incessant fear of being mugged or kidnapped. Salim strategically placed the projection of the beach at the entrance of the gallery door, making it impossible for viewers to escape the iridescent glows of the Arabian Sea footage or interacting with it by walking over it to enter the gallery.

The changing associations of being a citizen of Pakistan and having interacted with foreign perspectives on her country, stirred Salim’s interest to create a sculptural body of work titled ‘Travel Advisory Part II’ while in New York for her Masters. The work consisted of placing notes, letters and newspaper articles on light-tables, coercing viewers to take a closer look and read between the lines. Utilizing hand written empirical accounts of people who had come to/visited Pakistan, Salim brought forward the amount of evidence there was to testify against the bad press countries receive from foreign newspapers. She elaborates that the layers of text and paper were to complicate matters and provide the viewer with not only alternate perspectives but question the authenticity of the news they read.

In discussion over travel and migration, Salim shares images of her work from 2014 at the Ceramic Laboratory, Mark Rothko Art Centre in Latvia. Salim had placed her curiously shaped ceramic birds on the window sills of a display room; ‘Quite appropriate too as that’s usually where one can finds birds resting there.’ The birds resemble papier-mâché folded animals which children are taught to create and with their sharp angles and edges, they stand out against any surfaces they are kept on. The birds to Salim mean different things in different settings; ‘every home has an expiry date and this was brought about from my returning to Karachi and not fitting into my old home anymore. This piece in particular for the Mark Rothko Art Centre was about human migration because of the vast number of Jews who left Latvia after World War II.’

As we move through more images of work, I think of her portfolio as a cross between anthropological field notes, a diary of travel records, material exploration and a generation of ideas. As she describes the required amount of time she needs to prepare even the smallest body of ceramic work, most of Salim’s work has been during extensive residency programs in cities ranging from Liverpool to Cape Town. Salim recounts that if given more time she would want to put together years’ worth of her research and provide ceramic students/artists the opportunity to access the know-how which would be a fantastic source of guidance.

One Response to An hour with Sadia Salim