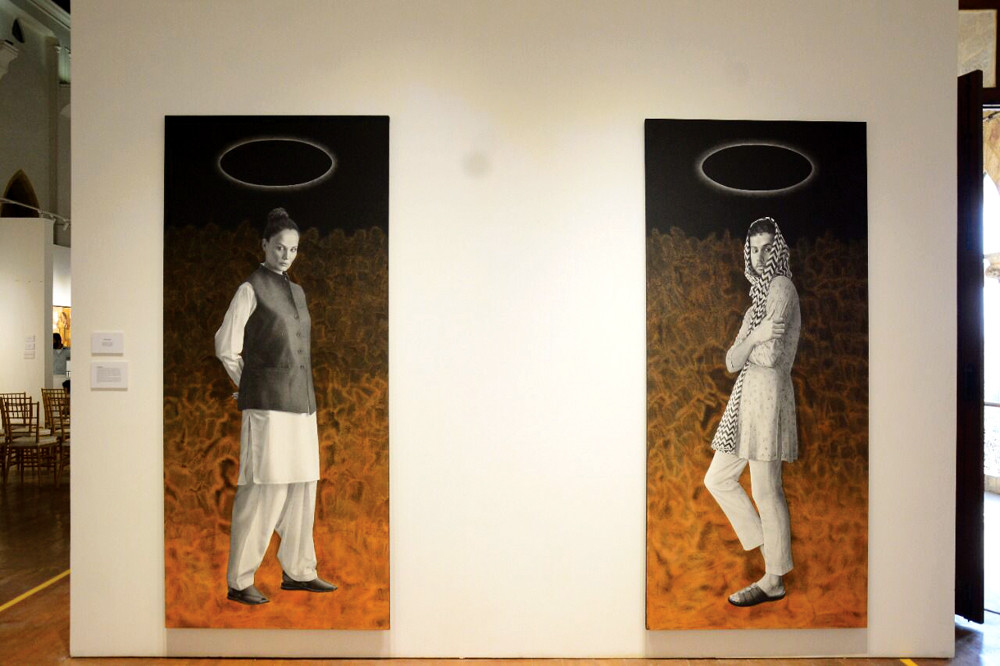 The art of creating experiences that bring meaning, culture and people together has been a passion for Pomme Amina Afzal. Over the last 10 years, her

Art and the City
On the Political Potential of Art
Et Tu Architecture?

The art of creating experiences that bring meaning, culture and people together has been a passion for Pomme Amina Afzal. Over the last 10 years, her company Phenomena has worked to execute projects and events for philanthropy, education, fashion, galleries and corporations. She aligned her creativity with art direction and curation managing a variety of events, art shows, galas and happenings where she champions young talent with a special focus on performance art. Her art repertoire includes managing the Karachi Biennale in 2017, which was a mass scale public art event that had multiple locations, site-specific installations and numerous art events scattered all over the metropolis.

The exhibition took place in the Sadequain Gallery of Frere Hall, the artworks were displayed on either side with larger presentations of Ismail Gulgee, Sadequain and Jamil Naqsh. An emotional memorialisation of the three legendary painters echoes the history of Frere Hall that has been around since 1863. Their contemporary and avant-garde nature has shaped a generation of artists some of whom are in the exhibition. Their modern painting techniques and the fearless act of creating had been a lifelong passion, their professionalism and commitment to their art careers reach global audiences. The exhibition continues into the individual displays of each participating artist.

Abdul Jabbar Gul deeply examines the binaries of the male and female, dissolving his subjects into a form that is androgynous and subliminal. His figures have had a long-standing presence in his painting and sculptural series; they are coupled and attached but remain distant and vacant in their expression. The scripture of Abdul Jabbar Gul has been evolving over the years revealing new associations and discoveries about the artist’s spiritual explorations through his work.

The interior space has been called “Zenana” across multiple languages, Meher Afroze creates her own intimate boudoir draped with layers of paper hanging down covered in verses. Are these sheets of paper acting as a wall or as a curtain around the velvet-covered bed? The space looks inviting and romantic, reminiscent of a miniature painting. Nazia Ejaz’s paintings titled “Ishq” incorporate painterly lettering in the foreground, the ink bleeding down the canvas. The energy with which each stroke is penned down completes the word “Ishq” and repeating it over several lines spread across the paintings reflects on the nature and meaning of the word.

Amin Gulgee’s ‘Impossible Growth’ dominates the space and draws in the viewer, the details include pieces of mirror and sculptural pieces of gold leaves. The contrast of metal and something as natural as a leaf pushes the viewer to examine the relationship between the two conflicting materials of matter. On the opening night, Amin Gulgee and Nazia Ejaz presented a performance piece titled “The Irritable Heart” where the two masked themselves behind gold leaf, paint and bejewelled blindfolds entering into the artwork as a medium interacting, creating and immersing themselves into the work using coloured pigment powder and their hands.

The show captured the pulse of the present-day contemporary art scene with artists focusing on themes of identity politics. RM Naeem and Affan Baghpati dismantled the ideas of male and female by rearranging and reclaiming the definitions as their own. Breaking stereotypes through figuration by deliberately using body language and gender to distort reality. Other artists in the exhibition showcase their emotional and meditative reflections in a series of figurative and non-representational works. The Frere Hall was originally meant to be used as Karachi’s town hall where the public could come together to be heard and initiate reform. The group show “Masters and the Phenomenal 10” certainly reignites the space as a platform for dialogue and conversation on important issues of gender and power allowing audiences to freely discuss these socially relevant issues while being able to engage with artists and their work.