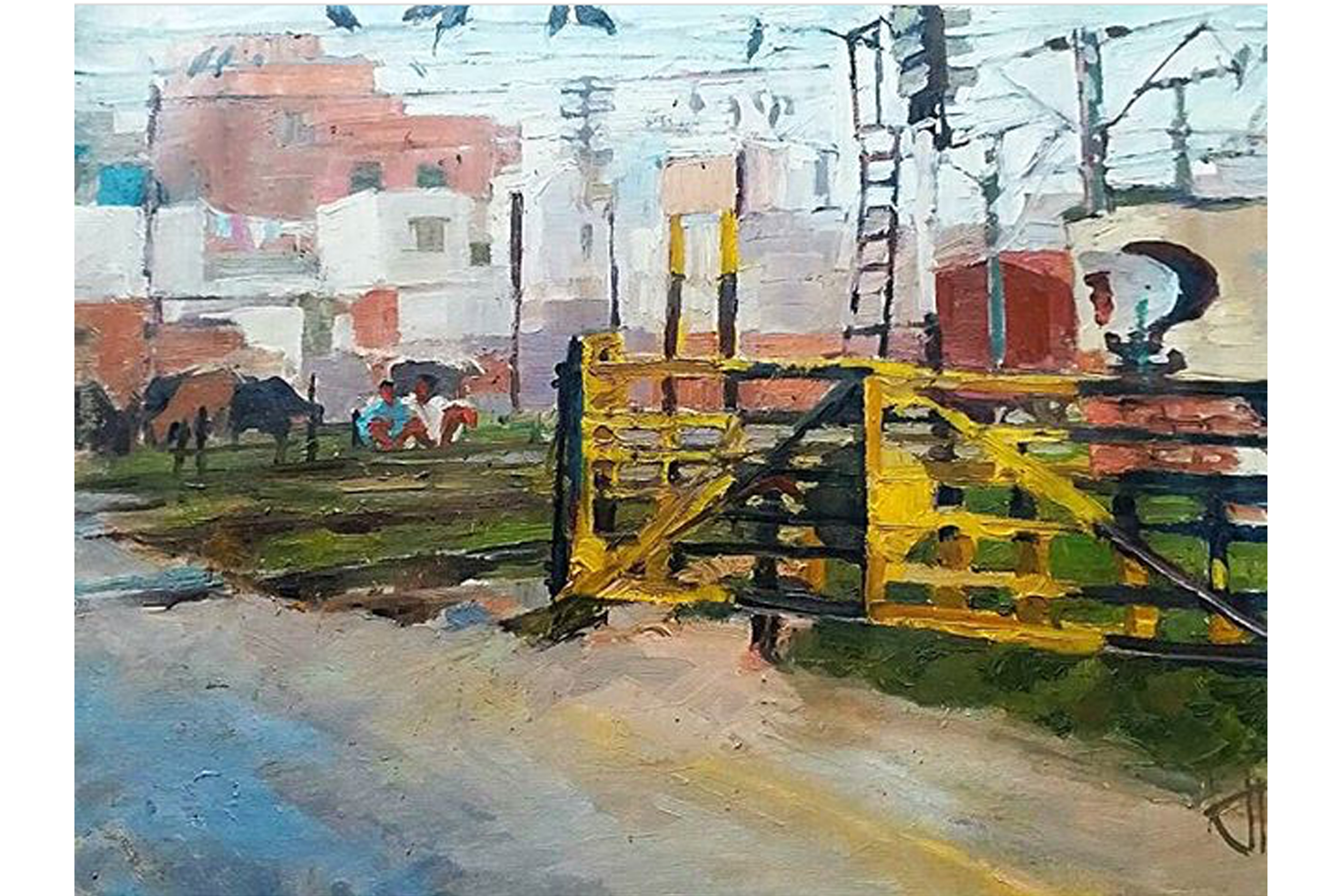 The Beauty of Chaos

As I commenced researched for this interview one painting from F.S Aijazuddin’s  “Lahore Illustrated Views of the 19th century” caught my attention.

Lahore Biennale 02: Samina Iqbal in conversation with Dr. Iftikhar Dadi at Pak Tea House, Lahore
Anwar Maqsood: The Man of Multiple Views
Art For a Cause

As I commenced researched for this interview one painting from F.S Aijazuddin’s  “Lahore Illustrated Views of the 19th century” caught my attention.  A watercolour titled “A View of the Kashmiri Bazaar, Lahore” from 1855 by John Carpenter depicts a meticulously rendered lane in the Walled City that is resplendent with buildings, jharokas, ornamentation and even  sedate awnings which decorate parts of the ground floor shops. The painter adopted local dress as he went about making paintings such as this that indicate a deep interest in architectural style, motif and even dress.

The entire scene is very conscious of what it wants to say, there is an intent implicit in this kind of depiction: suffused in a palette of ochres and browns almost as if it were a sepia coloured photograph the painting reads like a saccharine sweet vision that borders on the verge of being called “quaint”, suspended in time and evocative of a nostalgic crumbling past that no longer exists. I am able to glean all this information because John Carpenter, the painter of this scene has gone through great lengths to convey these ideas through his content and style. Clearly he was interested in documenting his fascination with a culture that was alien to him. He was an outsider looking in.

Cut to 2016 and Durre Waseem, a painter born, bred and educated in Lahore but based in LA paints Bhatti Gate plein air in Lahore for a Show that is eventually held  at Karachi’s Canvas Gallery in July 2017: her vision is a brash, bold antithesis of John Carpenter’s watery colonial vision. It is a scene where forms and structures meld and affirm their presence through gesture, spontaneity and the sheer brilliance of colour- there is no sound yet I cannot hear myself in the noise and hum of a city on the move. In John Carpenter’s painting the awnings could easily be transplanted and quite frankly belong in a French plein air painting of some pretty promenade but here fabric alludes to movement, volume, material and a diagonal, twisting swish that  diagonally cuts across the upper half of the canvas. Space, architecture, modern transport all of which are simultaneously competing for attention are acknowledged yet what “arrests” my attention is their happy streaks and voluminous forms of colour that appear to swell, bleed, build, radiate light and even zip and crisscross across the canvas in a manner that is both unnerving and exciting. It is a visual rhapsody of rhythm and harmony.

Durre Waseem completed her Masters from Punjab University in 1988 after which she  continued to teach at her alma mater. After a four year stint at DHA College for Women in Karachi she moved to LA where she has, undeterred by the change in landscape, continued to paint, exhibit and even win awards. Proficient in oils, watercolours and pastels Durre Waseem has also been exhibiting in Pakistan. Currently she is a member of Laguna Plein Air Painters Association and The California Art Club.

I cannot help but think of John Carpenter, whether he encountered problems working and sketching plein air in the midst of “natives” and if it still pans out the same way today for a female painting in the midst of the crazy cacophony of noise and people that characterizes our cities today.

“I am a plein air painter. I always have been… well to blend in when painting Chauburji,  last year in winter I doggedly stood on site “bukkul maar ke” … I had a manly outfit on and I tried to blend in as I worked till a little girl came up to me and asked  whether I was a man or a woman!… and in Karachi when I was painting at Boat Basin which was already windy and where no one is use to plein air painters, it seemed everyone had a problem with why I wasn’t working in a studio!“

Such disarming honesty and energy   set the tone of our conversation as Durre Waseem began talking about Lahore and her relationship to the city as a painter.

“What makes me stop, grabs my attention is a sort of geometry or design that I am able to identify in the midst of all the activity that takes place in our cities, in our everyday life. It could be a ray of light, a barber shop, a roadside eating place, a row of bicycles, a motif that to me appears as an abstract form…it is usually something ordinary that draws me to a scene. It is shape and form. There are interesting corners everywhere and every negative space is  contrasted  by a mundane object that is brilliantly lit up. Black stands out so nicely against our green grass, hence I suppose my attraction to black crows. The eye just can’t stop moving here. “

Dure Waseem elaborates on this as she talks about her profound love for Lawrence Gardens.

“The sky may be towards ultramarine in LA and a hazy cerulean blue in Lahore but it is compensated for because the city is green- it’s everywhere! When I lived in Lahore I painted Lawrence Gardens endlessly. I craved and missed it in LA yet when I came back and finally painted it I realized everything had changed.  For the painter in me it was too manicured and planned with much fewer trees. I missed the negative spaces that were created in between irregular foliage growth and trees as those were the designs I looked for when framing my compositions. So this time I painted something that had never interested me at all in all this time but had remained constant and unchanging, it now attracted me for its permanence perhaps: The Quaid e Azam Library. And I have to say I really enjoyed it!”

Her laments about the city are heartfelt yet in them is ensconced an undying love for her home city.

“Lahore has become so congested over the years. It used to be so much more fun when I started painting. Now you cannot even see the buildings because you only see people! Lahore has only gained traffic and people over the years…I use to paint Old Anarkali when I was teaching at Punjab University. I hate it now. I use to love the colour of the old brick buildings and remnants of old historical buildings. I remember the space where Yusuf Doodhwala once existed, it has been torn down I think. A Quran School has cropped up where the other space I use to paint existed. It’s a garish parrot green. I hate Anarkali now. ”

She narrates her experience of hunting for spaces near Royal Park with a tinge of disappointment.

“I had to paint at a location near Royal Park. Owing to the construction of The Orange Line I went on rickshaw and then by foot but would you believe there was so much congestion that there wasn’t even space to walk!..  encroachments, traffic… can you imagine a place so crowded you cannot even walk?!”

Yet we both note that it is the noise, cacophony and chaos that draws her back to Lahore for the character of the cities here has contributed immensely to her observational skills. Duree Waseem grudgingly admits she has a predilection for choosing what her colleagues back in LA call “challenging and complicated “compositions. They are baffled by her ability to pick and identify a pattern from so much so quickly.

“When I post images of my paintings of Lahore on Instagram for them they instantly understand though. It is ingrained in me now. I cannot do simple or static!.. in LA where I live it is just so clean, planned and monotonous. You see repetition everywhere. I didn’t even know what to paint when I started there initially! Yet here the disorder and chaos offers inspiration. There is such variety in terms of visual energy. In LA even the houses look the same but here every house seems unique and different. Similarly while both cities have electricity poles, in our cities every pole is different. Each pole stands out because there is a different banner or board or something on it.”