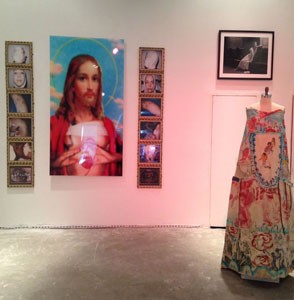 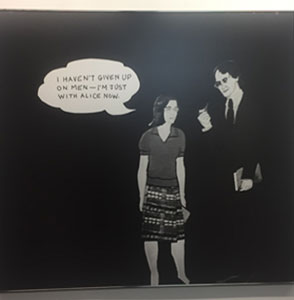 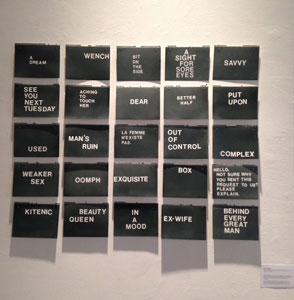 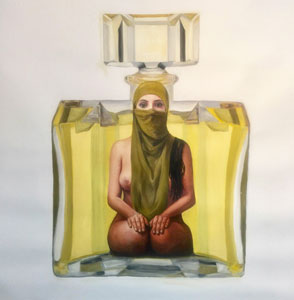 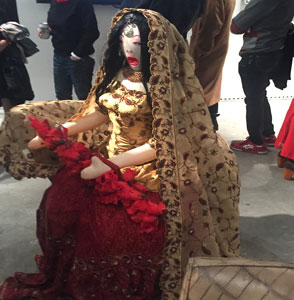 “Supercalifragilisticexpialidocious” is an invented, playful word from the 1960s Disney film Mary Poppins.  Breaking down the various parts of the clever, nonsensical song lyric, Lara Pan and her co-curator Ruben Natal-San Miguel came up with “atoning for educability through delicate beauty” as the new meaning of this silly word and therefore the unifying theme of this powerful show. Their act of fake post-structural linguistics perhaps intentionally undermines the seriousness of the big questions the show asks: How shall a woman present herself in the eyes of a patriarchal society? By tearing down social constructs that sideline women, can an exhibition empower women and condemn a few of the many conventions unjustly imposed by society worldwide?

Precedent makes a definitive exhibition on this deep topic difficult. But a few in this group show tackle it admirably, putting new ideas into play.

One such person is Qinza Najm, a Pakistani-American artist whose painting with video accompaniment juxtaposes the images of an attractive young female body, a veiled face and a giant perfume bottle to create a cat-mouse, push-pull dance of seduction. It juxtaposes very human brush strokes with the poignant electronic sting of reality presented on a video player hanging nearby.

The video tells the tales of three women: Amina, Qandeel and Ghandeer.

Amina, an 18 year old Tunisian, whose topless image appeared on Facebook in 2013, to call attention to her patriarchal society, is sentenced to death by stoning and told, among other things, “I will throw acid on your face.” Her reply? “My body belongs to me.” Qandeel, like Najm, a Pakistani, was nationally famous for her provocative but anonymous selfies, until her real name was revealed by a local journalist who later said, “I wish I hadn’t done it.” She was strangled, sleeping, by her own brother—to end her family’s shame. According to the video, “Soon afterwards an anti honor killing bill was passed… Waseem… has to be tried for the murder of Qandeel.” Ghandeer, 18 and Egyptian, dared to dance privately in 2009 with her girlfriends but when the phone video went viral, she became internationally hated. Her response, posting it on her Facebook wall: “My body is not a source of shame.”

“The videos are part of the story the perfume bottle is telling and it’s together one piece,” says Najm. “The videos are footage taken from different channels that tell stories of oppression.” If this exhibition’s goal is to justify the change away from patriarchal society, Najm nails it. “The female victims chose to become survivors and inspired others to speak up against the oppressors and inept social and cultural practices.”

“I have been working on this female theme for three years  now.” Using advertising images appropriated from the Internet, Najm tackles stereotypes of what women are supposed to look like and anything that smacks of discrimination.

The 5 x 5 feet oil on canvas piece is called Niqabi Virgin. “I believe all paintings and works are self portraits in some ways.” Then she adds, “The painting is not me but inspired by females I know.”

In a previous performance, done in a collaboration duo called Bolo with another Pakistani artist, Saks Afridi, Najm wears full hijab, takes selfies of herself with others and posts them using the hashtag #DamnILookGood. It is about tolerance, liberation and challenging perceptions of women who wear hijab by choice. “I have never worn it personally except for my hijab piece performance,” Najm told me. “No one in my immediate or extended family wears it and none of my friends wear it. It is mostly worn in the villages, smaller towns and more conservative areas.”

Still, Qinza Najm proudly identifies as a Pakistani-American. “I am trying to tell through my personal story and by stories of other females who are survivors and not victims of their circumstances… females who found the courage to ‘speak up’ and change the stories of their life and become inspirations for other women and people.” Najm completed her Ph.D. in Psychology enabling subconscious exploration then brought into galleries.

Another work Najm has in this show is a sculpture featuring a masked inflatable sex toy in full vestiary, executed precisely with Saks Afridi as part of their Bolo collaboration. The Groom Hunter is a satirical take on “the quintessential suitable girl every South Asian man and his mother wants.” She is “a stunning, subservient and appropriately educated girl.” She is a manifestation of “first world problems in a third world society,” all “told through the character of a blow up doll” armed with a machine gun and an extra chair. “This unreal object lodged in reality tackles… age-old societal pressures of contemporary global societies.” Finally, she is “achieving a sense of belonging while being out of place, finding happiness in a state of temporary permanence, and re-contextualizing existing historical and cultural narratives with the contemporary.”

Creating a dialogue about how feminism is remodeling itself in the 21st century, the other artists in the show span various gender identifications, national origins, generations, and artistic mediums.

Mark Bloch is an artist, art writer and critic based in New York.

One Response to Supercalifragilisticexpialidocious