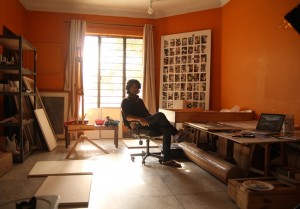 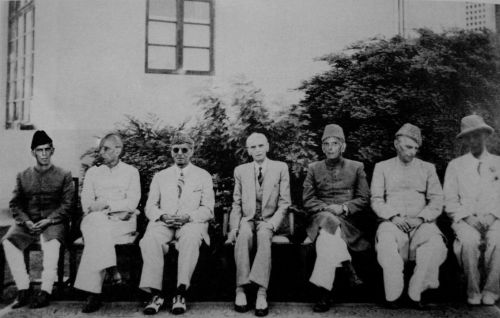 “I stretch an idea as much as I can, explore all corners of possibilities until the point that there is nothing new left in it for me to experience, it is only then that I move on,” the artist replies to my query on the limits of an idea.

I’m at Imran Channa’s studio and absorbed in an exchange of tales. It is an amiable bachelor pad in Model Town with a comfortable sitting area in the center and a studio/workspace, kitchen and bedroom surrounding it. I’m led to the studio space and there is an unexpected air of order. As I view one of his works the ‘Badshahnama’ (2010) derived from the actual pictorial autobiographies of Mughal kings (which was commissioned by Mughal Emperor Shah Jahan) he explains how these were always celebrated for their visual context (i.e. miniature) but it is history. “I cut some thousand images from the existing autobiography and began to reshuffle them”

Channa belongs to Sindh Shikarpur a land of charms, myths and saints and grew up listening to the tales of his elders and playing games like the Lik-Likoti (sindhi word for hide and seek). He graduated BFA (painting major) from The National College of Arts, Lahore (2004). And in the no-compromise struggle of his practice during MA Visual Arts NCA (2006 – 2008) he went on to the extent of making interactive works where he made his teachers and fellows play Badshah Wazir (i.e. king and his minister; a famous local childhood game). He also made works out of the critical jury reports that he received from his teachers; blackening out the parts he didn’t prefer to keep.

He elaborates how it all began from pictorial investigation and the interest in reviewing the old to understand the new .The MA Visual Arts program at NCA matured this objectivity to subjectivity, it was a time which tuned both levels naturally. Conceptual theory, rational history and dialogue with Dr. Mubarak Ali (who was teaching history at that time) further nurtured the urge to dig every last layer of history and bring it out, all new.

In conversation we flash through a complete timeline of events and the major question appears; what is history? Channa shares how the famous Sindhi folktale by Shah Abdul Latif Bhatai, with the two sisters Mumal and Sumal lend much to the execution of his work ‘Find the real Jinnah’ (2008), he elaborates the story upon my request “there are two sisters in a rich kingdom, one day the king (their father) sees a pig that passes through the water and changes it into dry land while doing so. The king gets to know that there are powers in the pig’s tooth and extracts the magic tooth upon killing the pig. He then goes into the river and saves all his treasures in the riverbed with those powers of changing water into land. A magician in the town disguises himself as a sick old man and asks Sumal (king’s daughter) for a tooth that would make him well. Sumal remembers the tooth her father kept and gives it away. The king loses all his treasures and wants to kill his daughter but her sister Mumal promises him to return all his wealth to rescue her sister from their father’s wrath. Mumal is highly intelligent, beautiful and an artisan of magic. She makes a paranormal, magical palace (Kaak mahal) and announces that the man who crosses through all the levels will be her prince. Many fail on the way and she acquires all their wealth but the one who reaches the last level finds many Mumals in different attires sitting next to each other. He has to find/guess the real Mumal to win her. “  It is an intervention of myth upon myth and time upon time…Channa leaves the question and the pressure of his investigation on his viewers …

Form construes newer meanings and plays a primary role while the hide and seeks continue. From resolved works/oil paintings that are meant to live within their boxes, showing only a portion through a slit(canvas gallery 2012)  to only a slit of a video being projected i.e. star wars ; a modern myth! (Art Basel Honk Kong 2013), everything can be expected.

Channa further explains how this notion of tweaking history to one’s own accord has prevailed through ages. The Grimm brothers (publishers of fairytales) are a great example as the colossally popular tales were kept true to their original form by one of the brother’s while the other one changed the characters in reference to the time and location. He shares how Dr.Nabi Buksh Khan Buloch is an avid researcher of the Sindhi folklore and has documented it in several books. Channa recalls how to Dr. Buksh’s dismay he asked him why he had changed all the names and backgrounds of the characters to Muslim values and expectations/symbolism. The question remains; can/should myth and folklore be documented or is it meant to concoct itself with an essence of the time and oration. This rift and romance between fact and fiction is perpetual…

To know the founder of Pakistan (Mohd Ali Jinnah) our nations’ hero, served as a channel to personal and political history.  Channa explains Joseph Campbell’s monomyth, or the hero’s journey, which comprises of three stages; departure, initiation and return. From getting into dialogue and juxtaposing himself in historically significant photographs of Jinnah to works like Fasting Jinnah – The myth of the birth of the hero (by Otto Rank ) and all such parallel knowledge was intelligently used as the pivot of research..

Channa explains the genius behind the disappearing of the statue of liberty by David Copperfield; it was a mere shift in angles and light that fooled the audience.  During the Gasworks residency (2011) in London an installation work ‘the day is nearly over…’ was almost a performance set of neon bottles and hats in the dark. It was an observation of London’s luminous nightlife as opposed to the dullness of the day.

While going through the blurriness and movement in the graphite drawings stacked on the studio-table (memories series 2011) I inquire about the process of removing and I’m directed to the heap of very-grey, hardworking, variety of erasers resting together! “I was known as the guy who buys erasers at the stationer’s!”  …

Even skimming through the range of Channa’s super fluent practice is a ‘one-of-its-own-kind- History lesson’. The myth and its understanding are acquired from infinite parameters that stretch over continents and centuries. The investigation is relentless