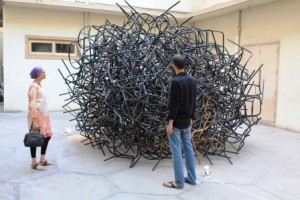 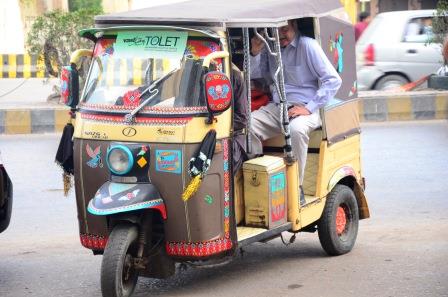 A one day exhibition by Vasl’s 8th Taaza Tareen artists.

An exhibition is incomplete without there being some form of viewership – in fact the very word ‘exhibit’ calls upon an intending response. A piece is somehow unresolved and some may argue, to even be incomplete, without interaction from the viewers. The art scene in Karachi is cautiously burgeoning towards exhibitions where the viewer completes the show; the interest in ‘one day only’ shows and installation works which profess upon a selected environment is reaching a new level.

Are artists keener to cross onto empty eerie sidewalks or, (dare we ask) are Pakistani viewers a little bored with the usual weekly gallery shows?

It wouldn’t however, be presumptuous to say that the younger generations of artists are at the frontline of creating exhibitions where feedback is not only crucial but experiential viewership brings out the best in the art work. Although few, residencies for new artists in Pakistan are taking notice of the fact that a residency should provide unique opportunities to artists which they would not be able to envisage. Vasl’s 8th Taaza Tareen Residency ‘To let’ resulted in a one day exhibition at dual locations, the Jamshed Memorial Hall and Peetal Gali, taking a step towards allowing young artists to engage with public vicinities. The 4 recent graduates displayed work that weren’t just mean to be seen but smelt, touched and heard as their installations were derived from their experiences during the 4 week residency in Karachi. To let indicates something for rent within a temporary time period; the first thing that comes to mind are the massive billboards spelling out To let, sprawled across Karachi’s landscape. when  It was interesting to see that the show consisted of elements that would not be apparent if it wasn’t for the viewers – one could say that the show was interactive but the artists proposed work that was intrinsic with research and narratives around the sites of the Jamshed Memorial Hall and Peetal Gali.

For Syed Hasan Raza, a graduate of Fine Art from the University of Karachi, To let offered a new dimension for his musings, which usually deliberate upon the structural growth of society and the measurements of society’s successes and failures.  His pieces for To let were conceptualized and made in the library of the Jamshed Memorial Hall which is known for housing Karachi’s Theosophical Society. Around Hasan’s display, the library was still cornered off with cupboards and drawers full of precious historical relics and odd documents which transformed an ordinary library into a lost room of treasures. Amongst the strangely charming clutter, Hasan installed sheets of pulp board within the book shelves and on the wall with inscriptions of the Theosophical Society’s objectives, inked onto this thick paper.  He then designed a system through which troughs of water slowly absorbed into the paper, dissolving the ink over the exhibition, spanning over 3 hours. This slow yet inevitable dissolution of the work was projected onto the walls of the library. Hasan’s work can clearly be interpreted as the slow demise of tolerance and intellectual discussions that were integral to the Theosophical Society’s role in Karachi.

Ramla Fatima seemed to also absorb the forgotten importance of the Jamshed Memorial Hall and integrate that in the process of creating her work for the residency exhibition. Having experience with suspending massive convoluted installations during her time at NCA, Rawalpindi, Ramla stayed true to the colossal-sized nature of her work. Using 200 hundred chairs from the Jamshed Memorial Hall’s auditorium, Ramla ripped off the seating and disjointed the iron structures of the chairs to interlock them into a giant sized ball springing with iron rods, intensely tangled. Her installation was set right out the auditorium to emphasize the sense of displacement of the chairs while a sound piece echoed in the dark and empty auditorium. A booming voice of a radio broadcaster dictating the names, features and indications of missing Pakistani citizens spoke to an empty theatre and stage with light coming in from the exhaust fans set high on the roof. Ramla spoke to us about how she has always been interested in the investigation behind missing individuals of Pakistan and how their disappeared falls upon deaf ears and a deaf state. Her sound piece, although loud, was strangely calming and it provided an alternate narration to the towering, angry and spiky ball of chairs set right outside the theatre.  Although her hometown is Taxilla, the young artist showed a sensitive understanding of forgotten histories and personalities which seem to evaporate in big cities like Karachi.

As Ramla’s installation of chairs could be metaphorical of displaced human beings and Hasan’s moving art work had a poignant living feel to it, the third artist displaying at the Jamshed Memoriall Hall, Ammara Jabbar used a cabinet to personify a magnetic personality of Karachi’s history. Through a dark corner of the Jamshed Memorial Hall, used as an alleyway for storage, lurid fluorescent lights played away the ajar doors. As the viewer peaked through, there stood a cupboard that resembled a lively jukebox, glowing in isolation. Although the discarded cabinet was found within the premises of Jamshed Memorial Hall, Ammara gave the rickety cupboard a makeover – complete with satin fuchsia curtains, eerie party lights flickering through the drawers and polished gold knobs. If the viewer pulled the curtain aside, they could see an inscription written in Urdu narrating a deliberately nonsensical bizarre poem. This cabinet was transported to Nigar Cinema and dragged on a trolley by the artist all the way to the Jamshed Memorial Hall on a steaming hot Sunday. This piece of performance art highlighted Ammara’s intention on creating a stir and drawing attention to this cupboard. It is quite obvious through her artist statement that she personified the cupboard as present for Nigar Cinema, a once jam-packed center of scintillating movies and old school Karachi glamour. Today however, the cinema serves as an indoor barn for animals and an artist studio for the local painter, Parvez Bhatti.  The artists’ work is intentionally confusing and not meant for easy interpretation, yet a poetic artist statement brilliant sews together her installation;

“As the day extinguishes itself, Nigar inhales the four-wheeled enterprises, and if you stay there long enough you can almost hear her holding her breath. The city sweeps itself into her walls and when morning comes the fabled men come seeking their frisky carts to venture into the city. Bun-kebabs served next to a sweltering pile of onions…  I found her an old cabinet, draped a curtain for her, I knew must take her with me. I put a guise on her, but oh like the delinquent they said she was…she said she must whisper another tale…”

The fourth artist of the 8th Taaza Tareen Residency, required the viewers to take a rickshaw ride and scuttle down narrow alleyways to Peetal Gali. Installed in the private residence of Reshma Mohmmad Shafi & Mohommad Naseem, the journey from Jamshed Memorial Hall to Peetal Gali hyped up the anticipation and mystery of the next setting. Ahsan Memon was intrigued by the history behind every day domestic utensils used and left behind by past inhabitants of this house. Aptly titled NP 13/18, after the home’s address, Ahsan displayed 3 matte black boxes which upon closer inspection showed ridges and curved of utensils crushed together. Although a major in painting, where his practice revolved around hyper realistically painted objects made to appear as a completely different material,  Ahsan’s sculptural works cleverly mislead viewers as well. The black blocks seem light and hollow yet once tapped or closely looked at, the viewer can see the nozzle of a kettle or the handle of a frying pan merging into the diameter of a cup. These pieces bore a stark contrast to the white painted staircase and tiled flooring of NP 13/18.

Perhaps the most interesting aspect of To let was the temporary nature of the pieces – their interlaying significance with locations introduced to them by the Vasl residency was cleverly curated by the 4 artists. The dependence on viewers showing up to experience and question the art work rather than buy them, shows that artists not only enjoy taking risks but were invested in originality.