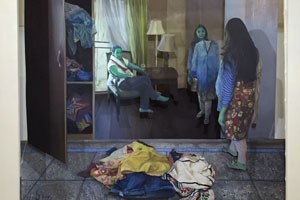 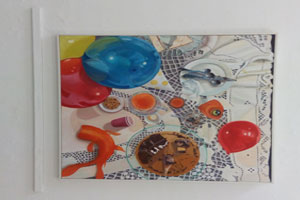 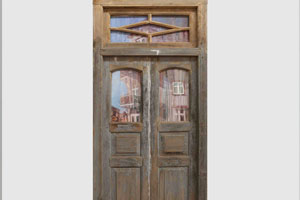 The realm of the tight knit art community of Lahore is progressively welcoming upcoming artists into its midst. Thesis shows act as the final rite of passage for artists to begin their own journey. Categorized at the bottom of the education system, Art for obvious reasons must not be taken too lightly. In Milan Kundera’s words,”But those who create deserve more respect than those who rule; that creativity means more than power, art more than politics; that works of art, not wars or aristocratic costume balls, are immortal.”

The Fine Art degree show 2016, consisted of 22 students from Punjab University, College of Art and Design; 3 from sculpture, 9 from printmaking and 10 from painting.

Being a student at National College of Arts, the institute is literally connected to Punjab University by simply crossing the road. It hardly comes as a surprise that both universities have slowly traversed into prison surrogacies. The birth of new artists from the annual thesis show is an important cycle that is thankfully not affected by such mechanical bonds. Upon entering the College of art and design, a sense of familiarity is present, almost like an extension of NCA’s own Fine Art department.

Saleha Khan’s thesis titled, “Sillage” consists of five oil paintings that revolve around presence and the lack thereof. The term ‘Sillage’ describes the scented trail left by a fragrance wearer. She uses the recurring motif of a goldfish in her painted living spaces to represent memories entrenched deeply. The artist is a rarity among her peers, boldly addressing taboo subjects by painting a violet brassiere in her paintings. While talking to the artist, her demeanor also projects this brazen passive approach which her work instills. She states “Imagine you have always shared a room with someone;now imagine them leaving. You are sitting in your room without them now and all you are left with is the trace of their presence.”

Her bright and illustrative use of colors creates the atmosphere of her paintings, the sillage resounds deeply as a recurring knocking within normal settings such as a birthday celebration. The hanging of clothes on a door that one would often ignore becomes a haunting reminder of what was and is no more.

Another painting thesis that captivates was Esha Javaid’s poetic amalgamation of antiquated wooden windows and doorways with modern painted city scapes on glass.

Her aesthetic sense while playing with history and effects of modernisation is quite a treat for the spectator.

Titled “White Washing Our Routes” it highlights the shifting structures of time, the layers that build overtime to create palimpsests of a city. Hidden underneath are the archival memories of a lost era of extravagance. She says “We modernise ourselves because we no longer want to associate ourselves with the fading murals of our city…but the truth is the old always shows, the roots are always present and the foundations always ready to be dug up”

The quintessential decrepit quality of the doorways reflecting modern life in the painted areas showcase the ‘instantaneous’ nature of the modern world, fast paced with the painted motorcyclists running against time. The reflections contain electrical lines, modern spaces, traffic, roads and city scapes.

She has tried to bridge the gap between the old and the new in an engaging way, making the installed doorways and windows seem like portals to another dimension; most likely the ostentatious past.

Upon reaching the end of the line, you come across the untitled installation by Ume Laila. It consists of painted pieces that are hung together to create a collective image that can only be viewed at a certain distance.

The artist paints to confuse the audience into believing it is a clear image but which is not the case at all. At first it seems to be a woman viewing herself in a mirror with the reflection of a living room at the back. There is an open cupboard spewing out clothes onto the floor, although the reflection of which is missing in the mirror. It almost seems to be questioning reality, what can be defined as the line between real and illusion. The pile of clothes act as a metaphor for the green faced woman’s mental state, perhaps she is unable to keep clutter at bay as the world speeds up.

In the sculpture thesis, Rabia Sadiq titles her work as “Connectivity/Relationship.” She explores the creation of humans as she puts it,”God has created us with utter perfection in every way.”

Her large scale installation of a cube comprised of smaller white cubes with a hole in each casting light out through the fluorescent bulb hanging within.

The sculptor hopes to catch the audience in a sublime experience to showcase not only the perfection of mankind but also the permeable nature where darkness may enter within. It is highly debatable if perfection is even a tangible thing, at least for mere mortals.

This show was a commendable effort by the artists to say the least. A must visit degree show, this year’s Fine Art thesis by the students of PUCAD has left quite an impact and set the bar high for upcoming students and much more to look forward to in Pakistan’s art scene.