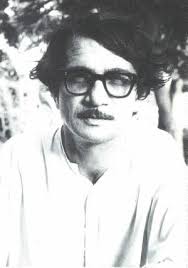 Works and Words of Sadequain

Like every human being, artists are also endowed with the gift of speech, so no matter if they employ the universal vocabulary of images, they are forced, conditioned or inclined to use language as their means of expressions. Apart from their daily discourse artists end up defining and defending their works through sentences, which often sound like heavy, convoluted and confused constructions, yet they are obliged to express their ideas and concerns – in words.

Perhaps the act of thinking is bound to words, because our specie became human, after we started to think – and thinking includes a system of signs and signifiers. But while we use language in our midst, we usually forget the importance of language, the greatest invention of society.

However like any other invention, such as the wheel, cart, car, watch, mobile, or computer etc., which offers an improved and improvised version/model, language also includes a series of variations. Arguably the literature of a language is an attempt to communicate an elevated form, format and features of a spoken tongue. Hence, the poets of great merit use the same vocabulary – of ordinary speakers of that language, but their compositions are of utmost sophistication, thus leave a lasting impression on the readers and listeners of those verses, occasionally instrumental in shaping and transforming a personal’s life, ideas and ideology.

Some of us are endowed with more than one medium of expression, as writers perform, singers draw, painters dance and poets make films, so the boundaries between disciplines and genres are bound to alter and modify, and it is often observed that when a person, who originally belongs to one domain, chooses some other mode of expression, he brings out unusual feature and addition to what has been created in that area, by those who have been practicing it for several years.

Similar is the case with Sadequain, the painter of remarkable figures and compositions, also expressed himself in the realm of poetry. But the world of word was not an alien territory for the painter, because when he migrated from India to Pakistan, the first job he had was at the Radio Pakistan Karachi, to inscribe Urdu ghazals for singers in readable script. But despite of this beginning, the interest of Sadequain in literature had a longer and deeper connection, since he belonged to a tradition and culture, in which being a man of many disciplines was considered to be civilized and educated.

In addition to – or may be because of that – the painterly surfaces of Sadequain are not devoid of their literal connotations. Either based upon imagery, which has a strong narrative aspect, or canvases, inspired by specific pieces of poetry (mainly of Ghalib), the work of Sadequain conveyed the artist’s fascination with words, which also resulted in several collections of his Urdu (and Punjabi) verses published during his life time.

Now the family of the painter has published another volume, in which his drawings and his verses are composed and compared (with English translation of Urdu poetry). ‘Cobweb World of Sadequain: Drawings 1966’ includes introductions by Faiz Ahmed Faiz and Sibtain Naqvi, the latter being the translator of Sadequain’s poetry. The book, an impressive hardbound, consists of Sadequain’s pen and ink drawings next to his verses and their translation. The whole exercise becomes an important endeavor, since it helps to comprehend the mind of an individual, who tried various means to converse with his audience.

However it would be misleading to use the word, ‘tried’ in this context, because Sadequain, like any other artist must have confronted the streaks of visual and verbal. But looking at the work, one realizes how the artist was able to keep a fine balance between the two hemispheres, because one does not need to read the poetry in order to enjoy drawings, or is required to know the artworks to like his verses, because both exist independently.

But if seen side by side, these contribute in creating a larger narrative, which seems to be the main motive for printing this book (supported by the Hashoo Group). It proudly informs that “Sadequain’s first solo exhibition at a commercial venue was held on May 16th at the then Intercontinental Hotel in Karachi in 1966”. Perhaps reproducing the preface from the same exhibition, the book offers words of Faiz Ahmed Faiz “Sadequain has once more reverted to direct social comment to depict a loveless and macabre world – a world of the scarecrow acting as the lord of blood-thirsty crows.”

The blend of macabre and mundane that was observed and expressed by one the greatest poets of Urdu is evident in the drawings and poetry placed side by side. In the sensitive lines of men with crows on their heads, headless artist drawing his detached head or a nude figure, cobwebs circling a human body, a viewer can decipher the pain and pathos of his epoch and how man has to confront and struggle the tyranny of fate. In his introductory essay Sibtain Naqvi writes: “Sadequain was able to view the societal decay and like a skilled doctor recognized the cancerous growth at an advanced stage.”

Compared to his drawings, the verses of Sadequain reflects an aspect of irony and subversive-ness, which links it to the tradition of Urdu poetry, but both the drawings and his couplets confirm the unique position of Sadequain who moved from one medium to other with an ease reminiscent of a Renaissance man.