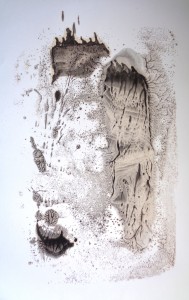 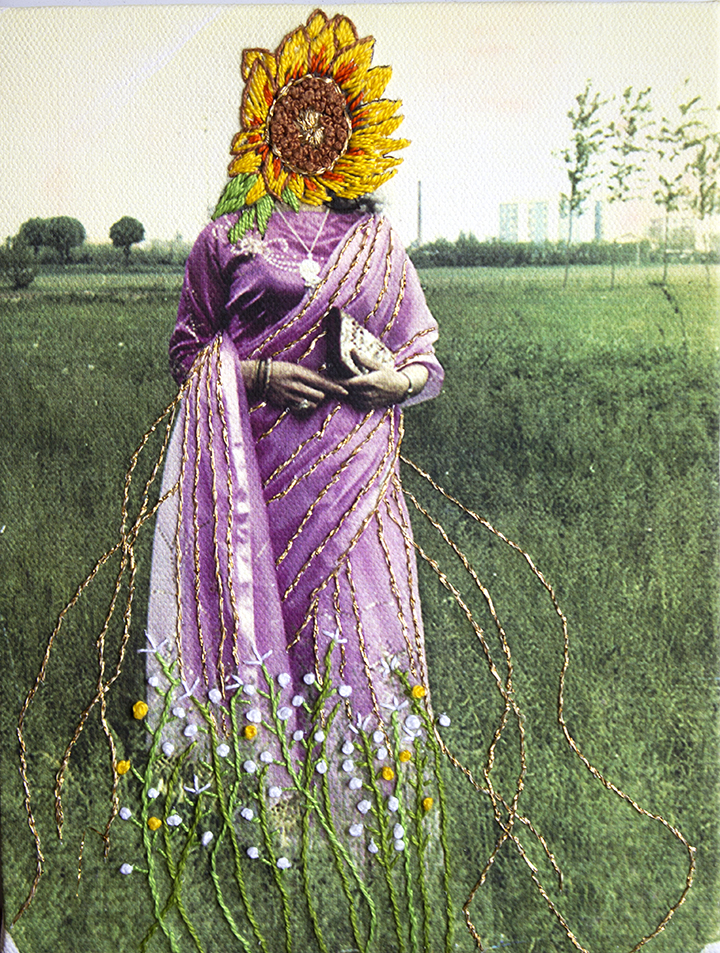 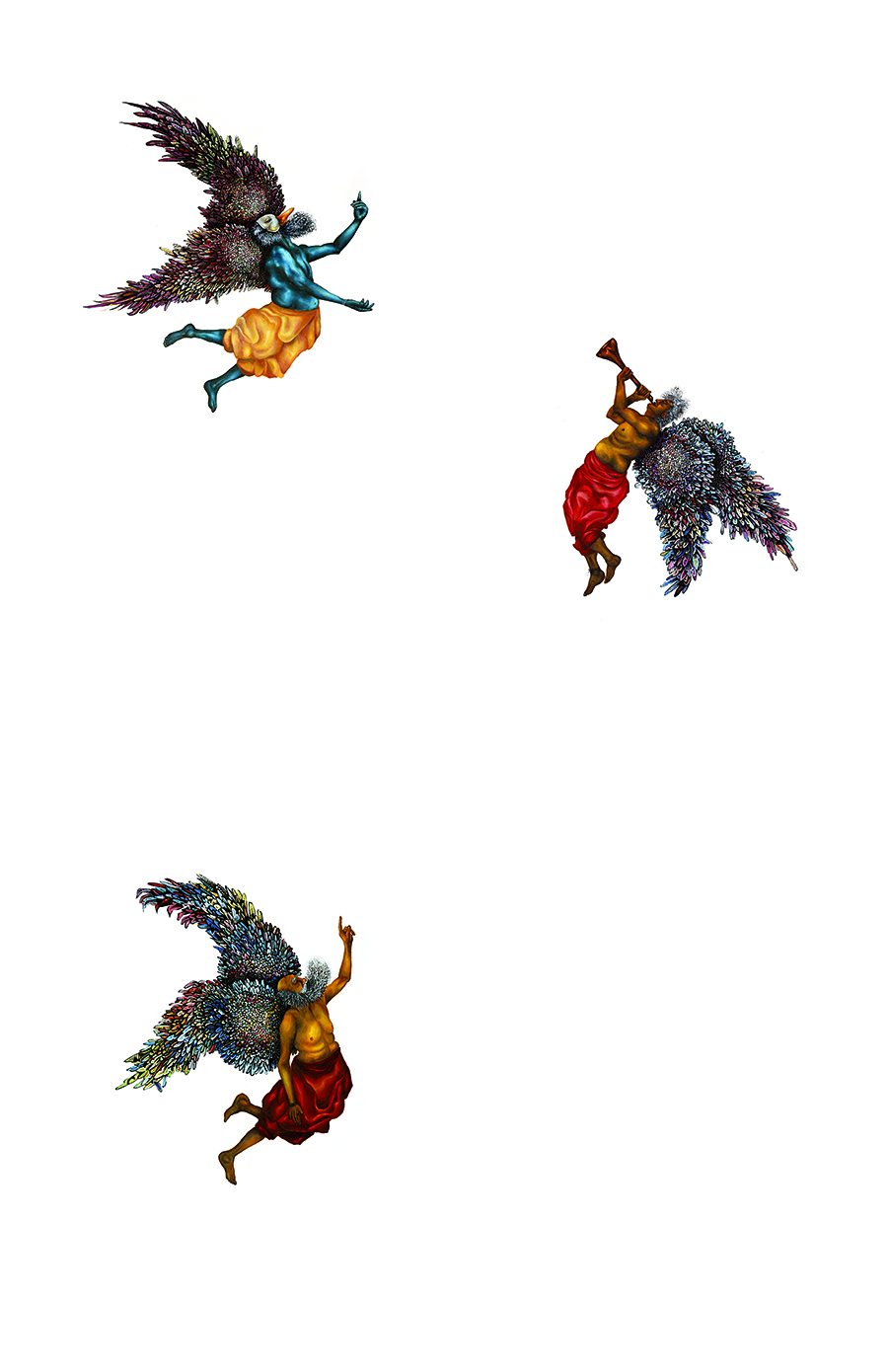 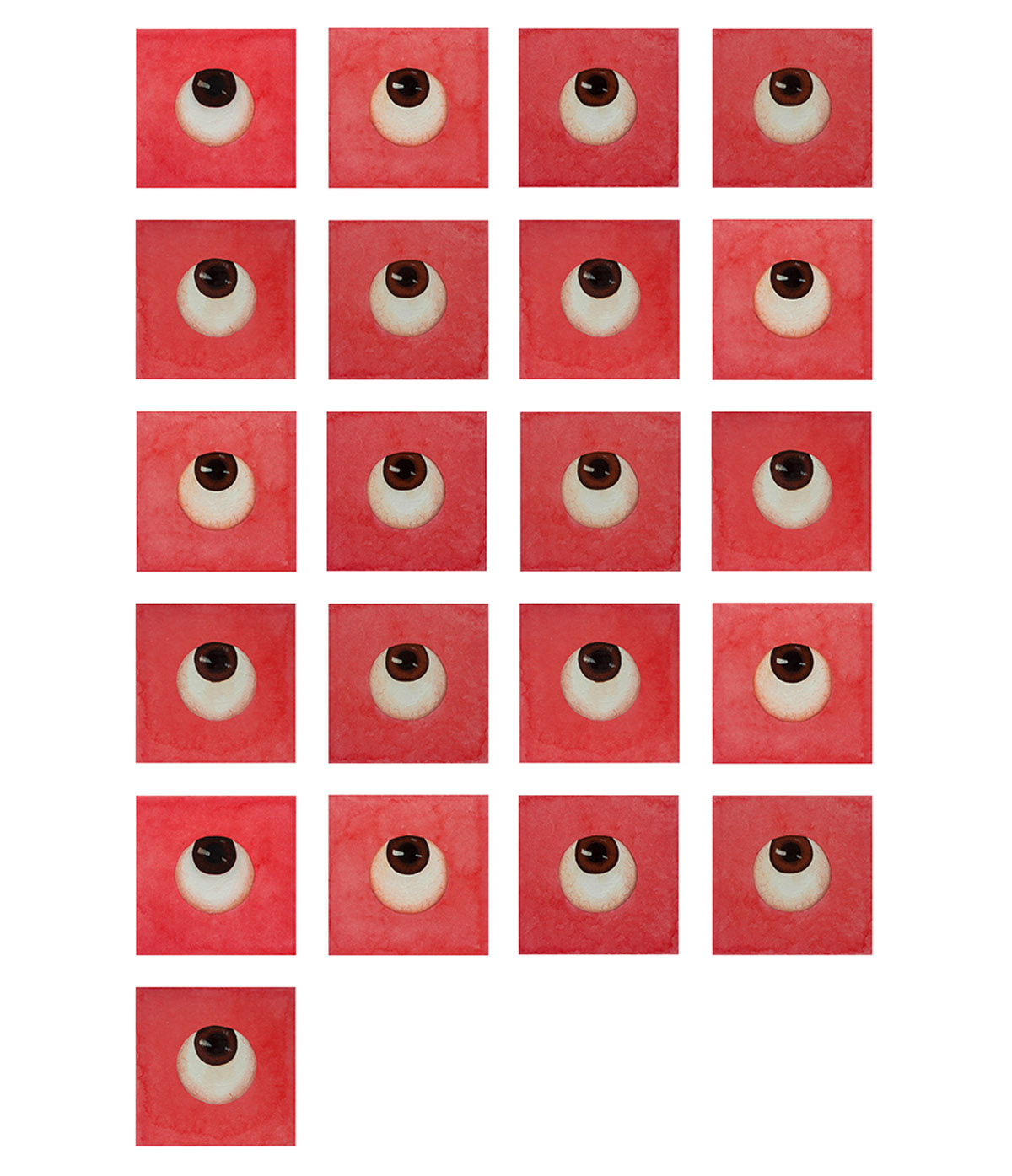 The recent group show held at Sanat Initiative intrigued its audience in a rather unique and mysterious way. Curated by Samina Islam, the show titled, ‘Who Killed Shumaila?’investigated a make-belief murder case about an unknown female who, through hints from excerpts in the catalogue, was a Hyderabadi screen-writer filming a documentary in Karachi and was found dead under unknown circumstances.

Keeping in mind this theoretical scenario, the artworks presented themselves as a trail of breadcrumbs in an attempt to unmask the untimely death of Shumaila. The first works on display were by the curator herself.  Thirteen printed and stitched canvases of varying sizes adorned the wall at random eye levels, all connected together by prominent scarlet string. A generic murder board, seen in practically every detective movie, is the first thing that comes to mind when looking at Islam’s display. This notion is further strengthened by the word ‘Clue’ placed before every title of her oeuvre. Standing in front of this cluster of intricately dealt ‘clues’, questions of whom, why, where and when begin to emerge. Who was Shumaila? Why and where was she killed and by whom? Islam understands this mystery through old images of her mother. Her personal touch to the case roots the fantasy of Shumaila, humanizing the fictional character and consequently, allows the viewer to empathize with the girl. The dated images provide information though in bits and pieces, leaving the imagination to roam in an open-ended void.

Another artist that has managed to leave the audience in an unrestricted space is Mudassir Sheikh. A graduate in Communication Design from the Indus Valley School of Art and Architecture, Sheikh is inspired by sound, cinema and during this show, greatly inspired by his fellow participating artists. Three recordings were spread around the show each one more ambiguous than the last. By using an amalgamation of found and created sound, Sheikh provided vague atmospheric recordings that left the listener with residues of unnerving confusion.

Like Islam, Roohi Ahmed was also an artist that used brilliant red string in her work. Established artist Ahmed creates an installation as her response to the case; two wooden chairs face each other, connected and practically covered with brilliant red string. Both are attached to each other and though no physical human presence, a sense of tension between two beings can be felt in the work. Each one is focused on the other; unable to move or break the spell they have on the other. There is no calm in this air but rather an unspoken anxiety. Why is the string red? Could it be reminiscent of blood or is it a symbol of love? Do the chairs, then, belong to lovers? In the diary entries of Shumaila, she constantly speaks of a mystery man ‘H’ while hinting at romantic involvement and whom she eventually leaves. Could it have been him? Unlike Islam’s illustrative display, Ahmed’s use of the string is metaphorical, raising more questions with each vermillion thread.

Next to Ahmed’s installation is a miniature piece by upcoming artist and IVS alum, Rabia S. Akhtar. Working with themes of escapism, Akhtar’s work balances fantasy and reality, nostalgia and memory.  Both her paintings house tiny, old men dressed in wings and shalwars positioned amidst a white wasli. The fantastical creatures all seem to be pointing up while being suspended in nothingness. The work is dreamlike, holding no foot in the real world. It is also quite striking and one of the most attractive works on display. The intricacy of the gouache and the spectrum of colour, from the subtly of the skin tones to the vibrancy of the wings, all add to the sheer beauty of the work.

A batch-mate of Akhtar’s and current post-graduate student at the Beaconhoue University, Affan Baghpati, was among the artists exhibiting. Moving away from taxidermy, Baghpati created delicate objects for the show, which included jewelry. Inspired by no longer functional household items, Baghpati fuses the pieces with domestic animals such as horses and bulls to produce a whole new aesthete. Created from metals, his work is addressed by his rare finds from discarded items, which have years of history and craftsmanship welded into them. His work too, becomes unique as it brings along with it much of its own unknown past.

Recent graduates, Feroza Gulzar and Razin Rubin also took part in the group exhibition. Moving forward with her interest in human anatomy, Rubin revealed three miniatures, each one following their own grid of squares. Individually, each square held a centrally painted eyeball all looking in the same direction. Her work gave off an atmosphere of nervousness, as though one were the momentary focus of all those gawking watchers.Except, that was it; the attention was in fact fleeting for as the audience went along to her second and then third painting there was a realization that the eyes moved upwards and they weren’t actually concerned about anything. Titled, ‘Whatever 1, 2, 3’ respectively, her work appears to look at society’s lack of consideration; continuous news of death and destruction as well as its relentless mention in movies and video games have numbed the population to a point that none of it seems like a matter of importance.

Gulzar’s work with videos was another interesting response to the theme of the show. Creating imaginary CCTV recordings, the artists displayed all her videos in a grid on a television screen, similar to the way security guards watch them, allowing all areas to be viewed at once. Each recording was a different space in an apartment building with the occasional movement of figures. On the bottom right screen, however, nothing but static showed which coincided with Gulzar’s statement that spoke about how the cameranear Shumaila, recorded her entering the apartment and then shutting off. What was happening on that tape? And ultimately, what happened to Shumaila?

Mir Dostak completes the list of artists presenting work at the show. Similar to his previous work, Dostak use gouache to recreate x-ray scans, which are devoid of gender and race, and aim at beings symbols of tolerance. His work comes in response to the death of a loved one and though the scan has no obvious injuries, the title, as well as shrouded face, hints at death. His other two pieces, ‘Last Moments 1, 2’ were abstract in comparison. They seemed like impressions of a certain liquid, residue left over from an activity. Something pressed down against the sheet and then pulled away only to leave this ambiguous mark that the artist felt the need to document. Are they someone’s prints? Is it some kind of spillage that someone attempted to clean? Did it belong to the victim or her perpetrator?

All in all, the show left the audience with more questions than answers. It was interesting to enter a world of mystery and intrigue and create individual assumptions of the make belief case. However, we can’t forget that there are, in fact, many Shumailas in this world, killed under devious and unknown circumstances. We can hope that in the real world, some, if not all, may find justice.