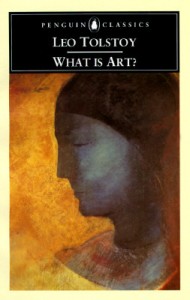 What is Art? By Leo Tolstoy

‘What is Art?’ is the culmination of Tolstoy’s polemical writing which spanned over fifteen years. The journey itself served to be of a spiritual nature which allowed Tolstoy to attain a form of inner peace and serenity, reflected in his last novella Hadji Murat, which alluded to him having attained a reconciliation with himself and the world around him.

Tolstoy published ‘What Is Art?’ when he was sixty-eight, nearly thirty years after the publication of his masterpiece Voyna i mir 1865-1869; War and Peace. Critics of the book have spoken of two perspectives of looking at the discourse. On one hand it appears to some as simplistic in nature, where the answer Tolstoy found to the question “What is art?” is very ingenuous. Here, one can say that art is the intentional communication of feelings. According to Tolstoy, the creation of a work of art proceeds along the following lines. First, artists have an experience or feeling, such as fear, joy, grief, anger, hope. They then desire to share this feeling with others, to infect them with it, to make them fearful, joyous, grief-stricken, angry, or hopeful.

In order to communicate their feelings to others, they create a work of art, a story, a song, a poem, a play, a painting. If they are successful, if they have created a genuine work of art, their creations will restore their original feeling, and more important, these works will give others the same kind of feeling. Art is essentially a means of communication; it is the most direct and immediate form of communication because the very feelings that led artists to create their works of art are experienced by their audience. Artists do not merely describe their feeling of joy or grief, nor do they merely reveal or show their feeling of anger or fear; the artists share their feelings with others by creating something that makes them feel joy, grief, anger, or fear.

On the other hand, one makes connections between art and ethics, which adds a certain level of complexity to the interpretation of the writings. It almost comes across as a treatise concerning the nature and purpose of art, describing how art can express moral values. Tolstoy does not define art in terms of its ability to express form and beauty, but instead defines art in terms of its ability to communicate concepts of morality. For Tolstoy, aesthetic values are defined by moral values.

According to Tolstoy, art cannot be defined as an activity which produces beauty. Beauty cannot be defined objectively, and therefore cannot be used as a criterion to define what is, or is not, art. The aim of art is not merely to produce beauty, or to provide pleasure, enjoyment, or entertainment. Art is a means of communication, and is an important means of expression of any experience, or of any aspect of the human condition.

One is hard pressed not to have noticed the unremitting moralism of the essay in its approach to art, the almost contentious nature which characterizes many of its passages, and the unreasonably narrow, exclusive, and arbitrary nature of the theory which produced Tolstoy’s list of works deserving to be called good art.

The problem some may have in perceiving anything of theoretical value in What Is Art? is compounded by Tolstoy’s extensive, often confusing use of categorization and the highly individual meanings which he attached to some of his most important terms.

For example, the essay contains at least three antimonial categories of major importance. Art is opposed to non-art, art in general to art “in the full meaning of the word,” and good art to bad art. Each of these categories serves a specific function within Tolstoy’s theory of art, but the reader is often hard put to maintain the segregation of each category from the others which Tolstoy intended.

With regard to the confusion occasioned by Tolstoy’s highly subjective use of certain terms, a close reading of the text indicates that the adjectives “good” and “bad” are normally used only in a moral sense. Thus, the statement that a specific work is an example of bad art means that the work satisfies Tolstoy’s aesthetic criteria and is art but that its effect on its public is morally bad. In the usual understanding of the words, however, “bad art” means something closer to “non-art” or “weak art.” Yet, for Tolstoy, non-art is part of a category entirely separate from that of bad art while weak art is a concept without meaning.

Tolstoy’s view of art reflects the very idiosyncratic and independent nature of his personal interpretation of Christianity. While he attempts to define a “universal” art as an art of inclusion, his aesthetic theory is narrowly focused on his own theory of morality, and thus defines an art of exclusion. He excludes many forms of art from what he considers to be “universal” art, because he believes that “universal” art must conform to standards that are not strictly aesthetic, but moral and social.

This aesthetic theory makes it necessary to consider the question of whether aesthetic values are the same as moral and social values. Tolstoy excludes many forms of art from what he considers to be “good” art, because he believes that “good” art must communicate some form of religious experience. For example, he refers to the music of Bach and Mozart, the comedies of Molière, the poetry of Goethe and Hugo, and the novels of Dickens and Dostoyevsky as examples of “good” art. However, he refers to the poetry of Baudelaire and Mallarmé, the plays of Ibsen, and the music of Wagner and Liszt as examples of “bad” art. The reverence for art as the medium of man’s continual advancement and moral improvement when directed by the “religious consciousness of the age” provide new pious hopes in accord with that spirit.

“The task facing art is enormous”, proclaims Tolstoy. Protecting and cherishing man’s humanity now become the tasks of art, and Tolstoy culminates his address in a series of prophetic promises of what art may accomplish in the future if it were to fulfill its destiny. One may call this a utopian vision of what art may accomplish to bring about “the brotherly union of men”; but Tolstoy calls it the “Kingdom of God” which is “the highest aim of human life”, in accord with the religious consciousness of the age. Tolstoy reminds the reader of all the moral miracles that art was able in the past to accomplish.

The reverence for art as the medium of man’s continual advancement and moral improvement when directed by the “religious consciousness of the age” provides, thus, a new pious hopes in accord with that spirit. Then, finally, a vision to potential future artists and men, a kind of inspired hope that ideals of peace and love for all mankind can indeed be brought about without violence by true art, or in this case, his perception of what true art is.