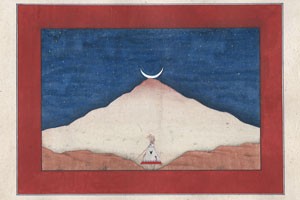 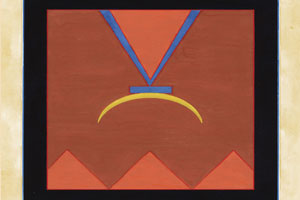 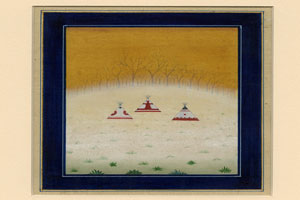 Obliterated histories, centuries of civilizations crumbled to dust, destined to be forgotten. But the lands on which they were born resonate with these stories, never forgetting. The rich existence of the Native Americans was mutilated after being invaded by the Europeans. Murad Khan Mumtaz explores this disrupted culture and pays tribute to the indigenous tribes through a series of delicate, contemplative paintings and prints.

A quote from Chiparopai, an old Yuma woman is mentioned in the statement. It recalls the tragedies faced by the original Americans. The forced assimilation and genocide they were subjected to, adding shadows of grief across the vibrant artworks.

The title ‘West’ reminds us of another, authentic western way of life before being diluted by the invaders, changing the meaning of the word completely. The dreamlike landscapes evoke a sense of transience, a fleeting narrative that almost seems imagined. The imagery, encompassing cone shaped tepees, wild, rocks and a variety of skies, brings about a lingering nostalgia as it recalls a period that is gone. The lack of human presence is significant. The fires have just been built, there must be activity going on within the tepees and the caves, the people are simply lurking out of sight. But the knowledge that they won’t emerge and the realization that their time has passed, their numbers, diminished and broken in the modern era, gluts the air with a jarring sense of loss. Despite the lack of people, the artworks hum with life. The rocks are fluid; the foliage vibrant, drinking in the light of the moon. In contrast, the tepees are perched on the land with an almost melancholic symmetry. There is a strange lightness as if within a blink they may flutter away into the night.

Mumtaz created his images over a period of five years, some of which were created during a residency in Ireland. He was inspired to investigate the narratives of the Native Americans after visiting Idaho, Montana and Wyoming, exploring the landscape intensely.

The artist employs an ancient painting technique known as ‘Pahari’. It is an Indian style of painting that came to life within the slopes of the Himalayas. Mumtaz works on handmade wasli and creates colors using authentic pigments such as ochre, indigo and lapis lazuli. Mumtaz trained in traditional miniature painting at the National College of Arts in Lahore and then went on to attend Columbia University on a Fulbright fellowship. Currently he is obtaining a PhD in Art History from the University of Virginia.

The amalgamation of an eastern technique with a western narrative is interesting and may give birth to the realization that the themes of loss and postcolonial history being explored in the art transcend geography and take on a global significance, despite the original context. By exploring this history, Mumtaz allows us to pause and for brief interludes, comprehend the vivid narrative of a people whose existence is now virtually absent.

One Response to West