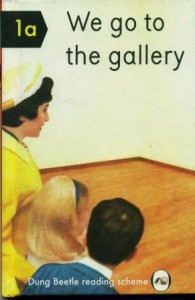 Book Review: We Go to the Gallery

Normally books are written and published so they can be read. But certain books compel us to look – only (or primarily), not through the visuals accompanying  the text, but by  inspiring a person to look at  his/her surroundings in a new scheme.  This encompasses the world of art as well, based upon the act of viewing someone’s creation, before trying to comprehend and enjoy it.

The act of going to an art gallery requires some training – if not a lot of courage – in order to appreciate works on display, because there is always a chance that someone would somehow  overlook the presence and power of an art work. A few years ago, a Pakistani critic was visiting Tate Modern with a friend and while walking through galleries, he spotted a room in which there were ladders, plastic sheets, hammers, gloves, unpacked boxes, rags, brooms, etc. So he moved on, saying soon there is going to be some work installed here, before being corrected by his friend: ‘That was the work’!

In today’s art world when we go to a gallery, we come with a lot of baggage – information, expectations – but more than that, a suspicion. Of coming across something that you may ignore, which turns out to be art, or mistaking something as art, which is actually a random object or part of the building. Thus, a viewer in today’s art museums and galleries is not much different from a visitor at a cathedral in medieval times, who was trying to locate clues, codes and signs in his search to find God, or the Truth.

In today’s art world, however, truth is not the sole possession of religion, but there is truth in art that is captured and conveyed by artists. This truth – or truths (as there may be multiple) – are unfolded in front of a spectator, who is satisfied  with getting his money’s worth, spent on the entrance fee, transport, and coffee and tea while at an art gallery/museum.

But what happens if the person fails to understand, admire or connect with an artwork. He/she may feel deprived and deceived, because in a democratic setting every citizen – like having the right to vote – must have a right to know the art displayed at public spaces. Yet this is not the case, because usually a work of art is incomprehensible and inaccessible to the majority of its viewers, who are perplexed and confused when faced with it, despite their best efforts.

This is a contemporary condition, because before the age of modernism, there was never a gap between the maker and the audience on the understanding of an artwork, but from the time of Impressionism and until the age of conceptual and installation art, there has been much confusion on what is art and what is not.

Some years ago, two small girls visiting the Cleveland Museum of Art in Ohio did not face a problem while encountering art. In their rushed tones, in front of each painting and sculpture, they pronounced, ‘this is art’ or ‘this is not art’. One wishes that the matter of differentiating art and non-art would be that simple; quick and impulsive, but alas, it is not. One has to spend hours in a gallery contemplating on what the work (or the artist through it) is supposed to communicate.

A small book, ‘We Go to the Gallery’, the first one in the Dung Beetle reading scheme, addresses these issues, which concern everyone, whether one admits it or not. It is a mock parents/children guidebook, which starts with “Have you taken children to a gallery recently? Did you struggle to explain the works to them in plain, simple English? With this new Dung Beetle book, both parents and children can learn about contemporary art, and understand many of its key themes.”

A misnomer, because the ‘guidebook’ actually makes us realize the ephemeral grounds on which contemporary art – or any art for that matter – is situated and understood by a majority. The thin volume, instead of serving as a guidebook, offers an account of two kids visiting a gallery with their mother and encountering contemporary art. Their unbiased, unconditioned and untrained responses reflect the actual reactions of many grown-ups who frequent galleries, but who, for fear of being judged as ignoramus, keep quiet.

But in this publication, mom is not mum, as she comments on various art works ad engages with her kids on the issues of contemporary art. For example, next to the illustration of a young girl looking at a rubbish heap in a black bag, the text reads, ‘“The rubbish smells,” says Susan. “It is the stench of our decaying Western civilization,” says Mummy.’, or in front of a blown up balloon by Jeff Koon, the text says, ‘“I want to play with the balloon,” says John.  “Only venture capitalists can play with this balloon,” says Mummy.’, and while spotting an installation of a naked couple, both children and their mother express, ‘“Gosh! They are naked!” says John. “Is it bath time?” says Susan. “No,” says Mummy. “It is body objectification time.”

These and other entries in the book make it not a kid’s guidebook, but a comment upon the art speak and the jargon that has infested our art world. Perhaps the last conversation in the book, which is not written but implied is that through its simple and straightforward text, it announces a basic truth: The emperor is naked (in the realm of art).

One Response to Book Review: We Go to the Gallery