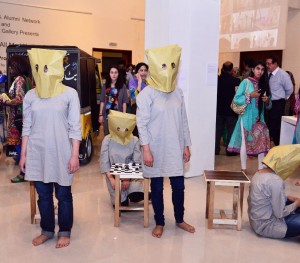 We Are All Mad Here: Performance Art Reaches Public Space.

A great buzz and energy throbbed in the National Gallery in the first week of May, with the opening of ‘We Are All Mad Here’. Large projection screens; a whimsical digital media installation viewed through a peephole, running a kaleidoscopic show of one basic pattern, lower legs and feet; a floor installation composed of wheat flour, engine oil and red ink; two transparent screens around which the litter of beet peels, constantly added to by one of two artists who were writing, crossing out, and rewriting statements about themselves as well as asking visitors to do so. Two artists were dramatically framed in a dark alcove, one painting the other with mud to symbolize the way in which we are constantly influenced, flattened and dulled by comments and pressures from people around us.

The curator of this show, Natasha Jozi, specializes in performance art, seeing in it links with local performance traditions, especially in religion, besides its modern, Western links. She has already composed and performed several works during her post graduate studies in the US. Initiated by the Pakistan U.S. Alumni Network and the PNCA, the exhibition brought together professional artists as well as students from local colleges and universities which do not specialize in art. Some very effective proposals emerged from the workshops conducted by Jozi in these institutions: Rang-e-Khaak by Taimoor ul Hassan and Maria Qiblah from Comsats, and The Game, by Huma Niazi, Rabbaniyyih Nabilzadeh, Mahnoor Ayub and Anam Iqbal from Fatima Jinnah University. With the aim to include artisans, and perhaps to point out the correlations between performance in a gallery and that already present in mainstream society, a truck artist was invited to paint a panel with birds, flowers and lines of poetry, bringing active interaction between him and the spectators rather than the silent interaction between his craft and observers on the road; there was also a rickshaw, in which visitors could sit and converse among themselves or with the driver.

Of the professional artists’ works, some of the installations and performances this reviewer enjoyed were Jozi’s Audio Chat with Allah. This audio/video piece is composed of the world seen from behind a veil. Light filters through in flickering patterns and bright colours, and the subject talks to – rather, questions – God in poetic lines; Rabeya Jalil’s large stop animation Talking Through Walls, in which two doodled cats dodge back and forth between lines of fencing or blocks of walls. Jalil’s latest work has been influenced by her work with children, so that her drawings often seem like naïve scribbles, until the viewer looks closer and reads the image closely; Jeremy Bell’s Building America, the filmed version of his actual performance, in which the artist, immersing himself in a tub of black paint, uses his body to leave marks across a long wall, symbolizing the dark history of Black American slavery; and Aleem Dad’s The Short Story of Human Life, in which wheat flour, engine oil and red ink are composed into a grid of small craters make an effective composition.

In performance art, the relationship between the artwork and the viewer is as important as the art itself; the idea is to stimulate and challenge existing social conventions. The genre is new to Pakistan, and it would be interesting, in a society which has long been stifled and is still hesitant to voice opinions or accept something which doesn’t fit entrenched social or political norms, to see how people’s responses evolve with more such exhibitions. During the National Women’s Exhibition at the PNCA in March this year, one young artist seated in a cordoned off rectangle in the center between two galleries painted ink washes over printed pages for hours. Performance requires great confidence, energy, and stamina, particularly when it is hard to capture the audience’s attention, or if they become hostile, as was the case with the famous Marina Abramovic and her partner Ulay in the nineteen seventies.

The well attended opening of ‘We Are All Mad Here’ was an interesting eye opener into audience behavior. The visitors were of all ages, from the general public as well as academics and others familiar with art. A group of students from NUST participated in The Game, which involved playing checkers on a board set up to confuse the player, with incorrect positioning of squares, while wearing paper bags on their heads. Their opinions, before reading the statement, were apt –  that life or experiences are often misleading or unexpected, that life isn’t what it seems. They had also tried sitting in the rickshaw, but didn’t feel confident enough to open up to the driver with their personal stories, although this was the intention, as people often reveal secrets where they feel they are unknown and will not meet again. Others could not relate to the genre in general, being more comfortable with more traditional art practice. But there was plenty of interest, and conversation. People stood in front of video screens with avid concentration once they realized that these were art works, or conversed with the artists. Some visitors were unaware of the significance of Aleem Dad’s installation in wheat flour, a series of mini craters filled with liquid, and walked over it by mistake until informed that this was not the intention.

A friend who documents Pakistani art history was fascinated by this public response, and interested to see how the movement develops, although she felt that Pakistan is years behind the West in introducing the genre. She pointed out that You Are Invited to a Sweet Celebration, was a take on a seventies performance by Marina Ambramovic and Ulay, in which the artists sat back to back, tied together by their pony tails for hours on end, barely moving. Here, the two female participants, Nida Ramzan and Ghufrana Naqvi, used the idea of sitting back to back, their heads touching, to explore the issue of the premium placed on a woman’s physical appearance. ‘It remains to be seen where they take such compositions,’ she said – if it is a different direction, and it is pertinent to us, here, will make them valuable. Performance is still very relevant abroad, however. Lee Mingwei’s Lee Mingwei and his Relations shown late last year at the Mori Art Museum in Tokyo, is one example, in which two of the explored concerns were sharing, through giving time and gifts – these latter could be physical or emotional – which are now becoming rare with the nuclear family unit and urban isolation.

Ilona Yusuf is a writer and an artist.