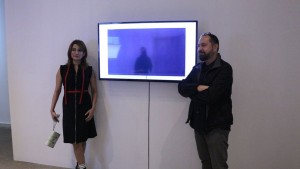 Most art today employs technology at one if not most, stages of its production, distribution and consumption. The digital forms the main structure that determines decisions made by artists to work with certain media and formats, sometimes used completely unconsciously signifying the deep effect of it on human lives today. How many artists, however, actually reflect on how we experience, and are transformed by the digitization of our existence? How many artists have recognized its unavoidable nature, that has consumed relationships, images and communication?

Social media, television, advertisements, texting, etc. are such a major aspect of my life that I have lost the patience to view art that involves standing in a gallery or museum, especially at an opening, watching long minutes of videos. I am easily impatient. I want the message quicker and I want to know the plot immediately. This is not meant to be dismissive of the genre of video art but it is meant to explain the lack in attention spans that have resulted from the digital age. I stepped into Canvas gallery on a Tuesday evening, with my baggage of preconceived notions, I already knew I was going to be distracted. Aroosa Rana proved me wrong. I saw paintings not videos. They were stills, white screens, slowly moving images with figures standing still as the TV glaring in the scene roils current around them.

In today’s networked world, anyone can broadcast live or post their thoughts to a social network, it would seem that censorship ought to be impossible. Even with the banning of YouTube, Instagram censoring nudes, China censoring pretty much everything; there are always proxies. There’s always VPNs like Piratebay, Hidemyass, Tunnelbear etc. and so many more avenues of access. Her work is digital, but rejects technology. Her work is painterly but it’s not. Her work censors but also reveals.

Entering the space the work is both fantastic but also logical, full of suspense and paradox. It does not constitute a narrative, but rather a metaphysical search. As I enter Aroosa Rana’s work I enter The Fall by Albert Camus. A novel written in second person, as a one-sided conversation with the reader sitting in as the character interacting with the protagonist.

“I sometimes wonder what historians of the future will say about us. One phrase will suffice for the modern man: he fornicated and read newspapers. After this sharp definition, I dare to say, the subject will be exhausted.”

Where Camus surmised the modern man as having ‘fornicated and read newspapers’, we could probably say the same for ourselves but replacing ‘newspapers’ for ‘Twitter’. He talks about the moral decay of the society and breaks down the essence of human nature through the description of the protagonist, Jean-Baptiste Clemence and his life events. I look at Aroosa’s screens and think about how Camus’s divides his story with every gin drink he consumes at the Mexican bar, where he gives his ‘confession’, as one of Aroosa’s screens confronts us with a reflection of ourselves. In The Fall, you are taken aback by a sudden terror realizing that the man you meet is actually like you. It’s your own being in fact, representing all of humanity, the universal condition – the hollowness of human condition. As Aroosa, peels off the layers of information that we are constantly bombarded with, in our daily lives, her pieces consist of excerpts of American blockbuster movies. Most of our media, television, music, and art is controlled by western influence – whereas the majority of the western world often views Eastern culture as exotic, backward, uncivilized, and at times dangerous. This feels like the artist is almost describing her visuals in Edward Said’s words ‘the distinction between the ‘orient’ and the ‘occident’. The work feels like a system of representations, that are made to produce an Other, which according to the belief of orientalism is created to secure the stability and supremacy of the western self.

As Jean-Baptiste Clemence, finishes another gin, we enter another room of digital projections. Two women, engrossed in Superman blaring from the television, the viewer is confronted. The women dressed in similar outfits, almost like a uniform, passively acknowledge the viewers existence but are enthralled by the moving scenes in front of them.

‘I like these people swarming on the sidewalks, wedged into a little space of houses and canals, hemmed in by fogs, cold lands, and the sea steaming like a wet wash. I like them, for they are double. They are here and elsewhere.’

As Camus takes a melancholy pleasure in his surroundings, we notice the dark tones of Aroosas digital projection, the women in the visual longingly stare at the television, imagining it as a sort of portal, a rip in reality, perhaps an escape.

Finally we enter a scene within a scene. A sort of photo shoot, with lights, cameras, and equipment. Figures pose gracefully for their director, who occupies the foreground. One second is expanded to one minute, the speed is so slow that the actors, cameramen and director are stuck in still photography and panned across. The viewer gets a behind-the-scenes glimpse, revealing the artists’ process. The final reveal is the viewer himself.